The More Names Change, the More They Sound the Same 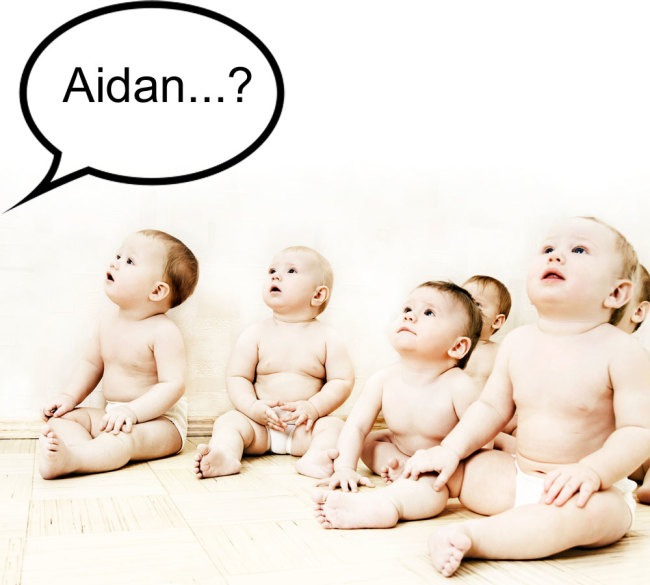 These days, I can’t seem to keep straight which of his friends my son is hanging out with on any given day—was it Jason, Jaden, Hayden, or Aidan? Their names all have a way of blurring together. My confusion reflects a growing trend for American boys’ names to sound more and more alike, according to a recent New York Times piece

reporting on data gathered by Laura Wattenberg of BabyNameWizard.com

. It’s not as if the pool of available names is shrinking though. Quite the opposite. A couple of generations ago, parents mostly stuck with a handful of tried-and-true classics (James, Richard, William); the ten most common names were shared by more than a third of boys in 1950. These days, only nine percent of boys sport the ten most common names. But this recent burst of innovation in names shows more restraint than variety when it comes to their sounds. For example, 36 percent of newborn American boys have names that end in “n”, as compared to just 14 percent in 1950. This might seem paradoxical, but in fact, it’s a fairly typical aspect of name invention (as my co-author Greg Carlson and I have discussed in our book Sold on Language

). When creating a new word of any sort, whether it’s a common noun, verb, baby name or even a brand name, there’s a tendency to gravitate toward known sound patterns. Truly original names, like Quatergork, or Ponveen haven’t yet made it into my son’s social circle. Novelty, it seems, thrives best when it’s a variation on the familiar. For example, let’s say you wanted to coin a new word referring to the wetly enthusiastic kiss executed by a drooling dog. Which of these would make the best candidate—quinge, slarm, or pift? I’m guessing you chose slarm. A quick tour through the English lexicon makes it clear why, as soon as you hit this patch of words: slime, sludge, slush, slobber, slop, slither, slippery, slick, slurry, slurp. The task of creating a new word never takes place in a vacuum, and known words that share some aspects of the new word’s meaning exert a magnetic pull. And since human memory creates strong links between words that are similar in sound as well as meaning, the bigger the cluster of similar-sounding words that overlap in meaning, the stronger the mental gravitational effect will be. Naturally, new coinages that join the cluster only serve to make its collective effect stronger. The phenomenon is very easy to see in brand names, since launching a brand by necessity involves creating a new name. The technology boom of the 1990s yielded company names that revealed some decidedly inside-the-box thinking: Lucent, Agilent, Avilant, Naviant, Consilient and Covisint. In the domain of drug names, there’s an over-representation of otherwise rare letters such as f, v, x, and z: Prozac, Paxil, Zoloft, Nexium, Viagra, Zyrtex, Valium, Celebrex, Dexedrine, and so on. It’s doubtful that this flagrant conformity causes a bit of harm to a brand (other than possibly making names more confusing to remember). Just as Quatergork seems more like a name for alien spawn than a human child, many consumers would likely be put off by a brand name that violates too many expectations. But there’s more to a good name than just a soothing sense of familiarity. Specific sounds, or combinations of sounds, can evoke certain impressions or emotional resonances. Some names, for instance, sound more masculine or feminine than others. In a fascinating study

, Kimberly Cassidy and her colleagues developed a computerized neural network model to dig up the sound-based statistical regularities that exist in English male versus female names. (For example, male names are more likely than female names to have a single syllable, to begin with a “w”, have stress on the first syllable, and to end in a stop consonant like “g”, “d” or “t” if they’re monosyllabic.) As a result, names could be scored along a male-female continuum depending on how many “masculine” or “feminine” sound properties they had. These scores helped to explain some interesting shifts in naming usage over time. For example, names that start out as being restricted to boys sometimes later drift over into unisex usage—think of names like Dana, Jamie, or Drew. But Cassidy and her colleagues found that not all boys’ names were equally likely to drift. Names with very high male scores stayed firmly anchored in the masculine domain while those that scored as less male-sounding were more often appropriated as names for girls. Cassidy and colleagues then investigated whether similar sound-to-gender biases play a role in brand naming. They made up a bunch of brand names that varied along the male-female sound dimension, and proposed them as names for fictional new products. They found that people preferred to match up the male-scoring names with products like power tools, and the female-scoring names with cosmetics and beauty products. What’s more, a comparison of the products advertised in Sports Ilustrated versus Glamour magazine showed that existing brand names already reflect these biases: the products advertised in Sports Illustrated tended to have higher male-scoring names than those that appeared in Glamour. In addition to gender, many more meaning dimensions seem to be implicit in the sounds of words, and they are being systematically explored by marketers and brand namers. In one such study

, marketing professor Richard Klink reported how tweaking individual sounds can shift judgments about a variety of product properties. He asked participants questions like: Which ketchup seems thicker, Nidax or Nodax? Which toilet paper seems softer, Fonib or Zonib? He found, among other thing, that fricative sounds like “f”, “s”, “v” and “z” were perceived as sounding smaller, faster, lighter, sharper and more feminine than stop consonants like “t”, “d”, “p” or “g”, and that the vowel sound in “lug” and “suck” is uniquely unappealing—lending some truth to the slogan “With a name like Smucker’s it has to be good.” The right-sounding name might even help politicians get elected. English professor Grant Smith has studied the sound characteristics

of the names of successful candidates for office, and claims to have developed a score that predicts with some accuracy which politicians are most likely to be successful based solely on their names. According to this score, Clinton has one of the most attractive political names among U.S. presidential candidates, while Bush and Dukakis were saddled with stinkers. As it happens, one of the sound features associated with winners’ names is ending in “n”. There you have it. Millions of American parents are clearly on to something. Prospective parents tend to obsess over the names of their incipient offspring, often getting conflicting advice from friends and family. Perhaps they should take their cues from language and marketing researchers. In the interest of projecting certain desired attributes, a survey of common words that sound like their top name choices might be revealing. For instance, a quick search at Babynameswizard.com shows only thirteen boys’ and girls’ names that begin with “sl” (including… you guessed it: Slayden)—perhaps not an accident, given the whole sludge category problem. On the other hand, there’s a bounty of names beginning with “br”—names that are possibly an excellent choice for parents who’d like their children to project confidence and strength (think brazen, brash, brassy, brave, bravado, brawny, brawl, brandish, brick, etc.). And who knows, perhaps the whole process of consulting with friends and family could be helped along with the right tools—expectant parents could circulate surveys to their friends and family, focusing their attention on questions such as: Which seems stronger, Brent or Kent? Which seems kinder, Jason or Mason? Which seems more presidential, Clinton… or Jaden? Image courtesy of Nejron Photo / Shutterstock