The Man With Uncrossed Eyes

"GB" is a 28 year old man with a curious condition: his optic nerves are in the wrong place. Most people have an optic chiasm, a crossroads where half of the signals from each eye cross over the midline, in such a way that each half of the brain gets information from one side of space. GB, however, was born with achiasma - the absence of this crossover. It's an extremely rare disorder in humans, although it's more common in some breeds of animals, such as Belgian sheepdogs. Here's GB and a normal brain for comparison: 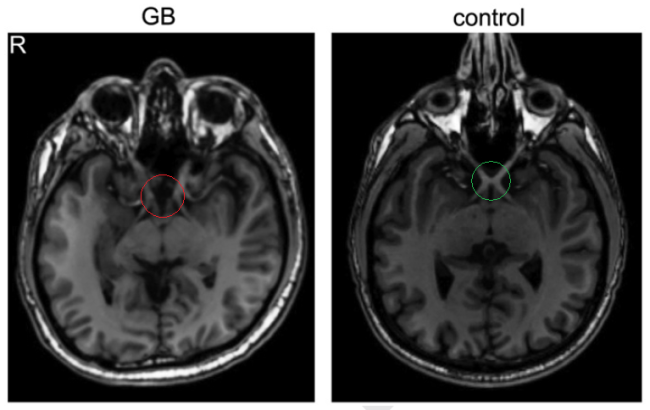 Canadian neurologists Davies-Thompson and colleagues describe GB in a new paper using functional neuroimaging to work out how his brain is organized. In the absence of a left-right crossover, all of the signals from GB's left eye end up in his left visual cortex, and vice versa. But the question was, how does the brain make sense of it? Normally, remember, each half of the cortex corresponds to half our visual field. But in GB's brain, each half has to cope with the whole visual field - twice as much space (even though it's getting no more signals than normal.) It turns out that the two halves of space overlap in GB's visual cortex, as these fMRI results show: 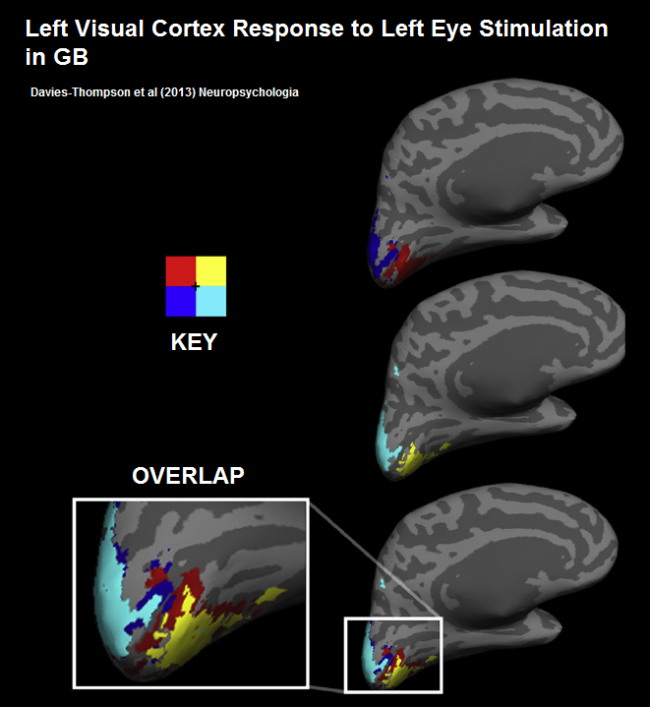 The four colours represent the four quarters of the visual field, and the brain blobs that light up in response to them. Although the bottom and the top of space are separately represented, as they normally are, there's complete overlap between the areas that respond to bottom-left and bottom-right stimulation, and likewise top-left and top-right. It's possible that they are separately represented at a smaller scale, however. Despite this, GB's vision was remarkably good - he scored around 20/80 vision, one quarter as accurate as a typical person. This is a fascinating case report, and vision neuroscientists will find much to ponder here. Still, what I'd love to know is how does it feel to have overlapping representations of the two sides of space? Does everything seem to be mirrored vertically? Does GB find it easier to tell objects apart when they're above and below the other, compared to side-to-side?