The Man Who Fought a Bull With Mind Control 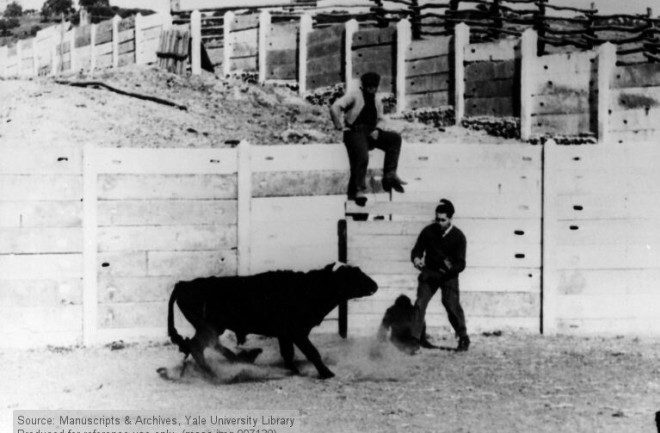 Jose M.R. Delgado steps into a Spanish bullring as a bold demonstration of his research. (Credit: Yale University News Bureau)

The investigator, dressed incongruously in sweater and tie and holding a small metal box, stands in a bullring. He taunts a bull with a gesture of his hand. Suddenly the bull faces him and charges. Taking a couple of steps back, the investigator presses a button on the box to send a radio signal, and the bull halts in mid-stride. It turns away. The animal’s natural aggression has evaporated.

This risky behavior-control demonstration, conducted in Spain in 1963, was the signature experiment of José Manuel Rodríguez Delgado, a physiologist and scientific showman who explored the varied responses of the brain to electrical stimulation.

During the middle decades of the twentieth century, Delgado grew notorious for using electricity to elicit rage, anxiety, pleasure, drowsiness, and involuntary movements in his animal and human subjects. Critics complained that he was paving the way for mind control; Delgado countered that changing the functioning of brains through electrical stimulation was not necessarily a bad thing.

“He was a big personality,” says Jonathan Moreno, Professor of Ethics, Perelman School of Medicine, University of Pennsylvania. “The audacity of the bullfight experiment impressed everyone. A number of other researchers could have accomplished something like that, others who were managing rodent brains with electricity, but Delgado was the one to capture the public’s imagination.”

From Spain to the Bull

Born in Spain in 1915, Delgado first aspired to become a physician specializing in the health and disorders of the eye. After exposure to physiology and neurology, however, he changed his focus to the brain. He joined the Yale medical faculty in 1950, by which time he had already begun a series of experiments that capitalized on his talents as a builder of ingenious gadgets — implanted electrodes and radio receivers — that allowed him to deliver electrical stimulation to the brains of animals and humans directly and remotely. Often all it took was the flip of a switch.

In these experiments, Delgado observed the effects of electricity on the behavior and affect of his subjects. In monkeys he stimulated regions of the brain that controlled aggression, and he sometimes trained threatened animals to flip levers to manipulate and extinguish the belligerence of other monkeys who intimidated them.

He studied the effects of inducing involuntary muscular movements in cats. And for one unfortunate chimpanzee, Delgado designed a kind of biofeedback in which he generated an unpleasant sensation in the animal’s amygdala whenever it produced a particular type of brain signal; the chimp learned to avoid making that signal and grew quite subdued.

The bull experiment, however, drew the most attention. Delgado attributed the sudden end of the bull’s charge to “a combination of motor effect, forcing the bull to stop and turn to one side, plus behavioral inhibition of the aggressive drive.”

It was, The New York Times explained at the time in a front-page article, “the most spectacular demonstration ever performed of the deliberate modification of animal behavior through external control of the brain.” But in 2005, a team of physicians reporting in Brain Research Reviews, dismissed the experiment as “a famous publicity stunt.”

Delgado applied electrical stimulation to the brains of humans as well. In 1952 he became the first researcher to report on the longterm effects of the implantation of electrodes in people, and in later research his devices sparked intense euphoria, anger, laughter, friendliness, and even lust in human subjects. A female subject whose stimulation generated extreme terror afterward “remembered her fear but was not upset by the memory,” Delgado wrote. Strangely, subjects sometimes insisted that the involuntary muscular movements that resulted from Delgado’s stimulation were intentional acts.

When detractors observed that Delgado was setting the stage for mind control, he replied that his techniques could not produce specific thoughts, direct an aggressive or emotional response toward a specific target, or impel subjects to perform complex tasks. No “Manchurian candidates,” he insisted, could develop from his research. To the contrary, he noted “a moral and social duty to advance scientific knowledge and to improve the welfare of man” that his work represented. “This research is both ethical and desirable,” he noted. Improper use, not the technology itself, should be regulated.

Even so, Delgado’s research prompted enough protest to encourage him in 1974 to return to Spain, where his controversial image faded. He died in 2011.

Lacking today’s fancy equipment and relying on grit and inventiveness, Delgado and his research remain significant. “If you think about the progress from Delgado to transcranial magnetic stimulation to robo-rats to contemporary brain research funded by DARPA [the federal Defense Advanced Research Projects Agency], you can see the progression and the growing prospect of mind control and the ethical issues that come up,” Moreno says. “When you turn on a brain implant, is it now the same person who consented to have the implant in the first place? We are just starting to think about these questions.”

Jack El-Hai frequently writes on the history of science and medicine and is the author of The Lobotomist and The Nazi and the Psychiatrist.