The mass murder and suicide in a college in Oregon last week brought out the following claim by a professional troll: 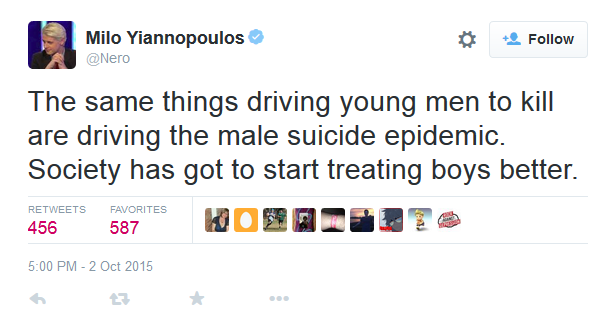 So is there an epidemic of male suicides? I'll assume we're talking about the USA although what I'll say goes for most other countries. Here are the facts: 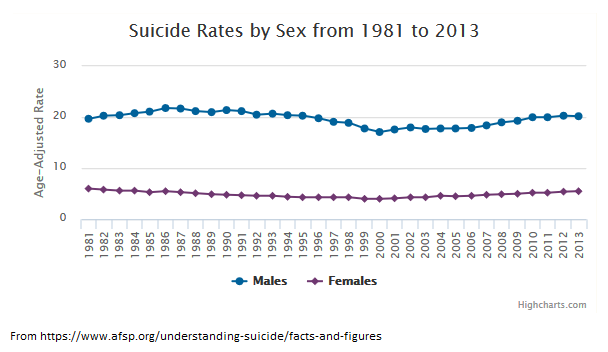 In summary, there is no male suicide outbreak. Every suicide is a tragedy and since most suicides are men, it is largely a male tragedy, one that deserves all possible attention - but it is not an epidemic. Then again, perhaps by "epidemic" Milo does not mean to imply that this was a new phenomenon? Some epidemics last a long time, after all. Surely it's shocking that males have such high suicide rates, however long this has been true? Well, yes, but my point is that whatever is driving male suicides, it is not especially modern, and is not confined to the West. So the problem, whatever it is, is unlikely to be due to how we 'treat boys', given that boys were treated very differently 100 years ago, in Afghanistan or in Zimbabwe today, and yet the male suicide bias has remained all too constant. Incidentally, Milo's is not the first simplistic theory to have come undone when faced with the facts about suicide. For instance, back in 2009 a pop psychologist called Oliver James claimed that British people are 'twice as unhappy' as their counterparts in the rest of Europe. However, this does not seem plausible given that British suicide rates are much lower than those in some of the other European countries, such as France and Germany, which James held up as models of well-being. Similarly, consider the idea that we can measure and compare levels of mental illness in different countries around the world using standardized surveys. These surveys have been carried out, at great expense. The problem is, that these estimates don't correlate with suicide rates. For instance, Japan's suicide rate is more than double that of the USA, even though Japan has a rate of mental illness (according to the surveys) three times smaller than the USA. Overall, suicide statistics are, if you'll forgive the expression, the graveyard of bad ideas about society.