The link between creativity and mental illness is pervasive in popular culture. But research remains controversial. 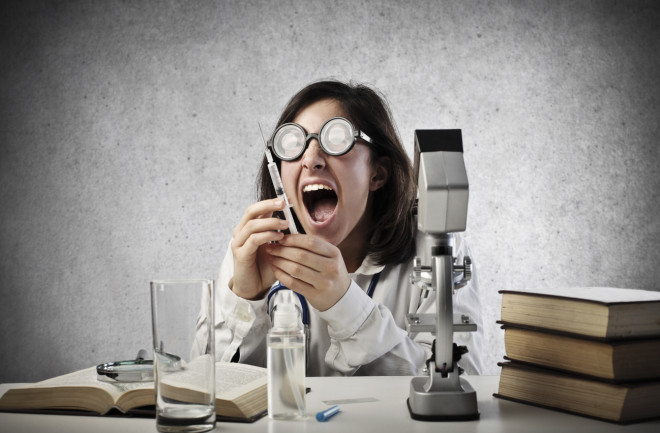 There is something irresistible about the connection between brilliance and mental illness. In popular culture, we embrace the wild-haired scientist scribbling equations over every surface — existing on a precipice between virtuosity and insanity. Likewise, we think of artists as tortured souls who must fight their inner demons long enough to produce works of brilliance before ultimately cutting off an ear or falling into a deep depression. Whether there is any truth behind the stereotype has divided scientific opinion for decades.

Perhaps the most widely cited evidence for the link between creativity and mental illness comes from the work of American neuroscientist Nancy Andreasen. In 1987, Andreasen found an increased incidence of bipolar disorder among creative writers and their family members through interviews she conducted at the University of Iowa. Among them was the renowned science-fiction writer Kurt Vonnegut.

A similar study published two years later, based on interviews with British artists and writers, found a 38 percent incidence of mood disorder — although a control group was not included. Both, however, have been heavily criticized for their small sample sizes, their use of self-reported data and interviewer bias. Psychologist Judith Schlesinger, an outspoken critic of these studies, argued that the mad genius hypothesis has as much scientific credibility as Bigfoot and risks pathologizing creatives by ignoring the hard work and courage that is key to a successful career.

The Problem with Measuring Creativity

Two of the main challenges researchers face are defining what creativity is and determining how to accurately measure it. “Divergent thinking” is often used as a proxy for creativity, defined as the ability to come up with as many answers as possible to an open-ended problem. The classic example is to ask participants to come up with potential uses for a brick, to which a divergent thinker might respond, “paperweight, doorstop, makeshift weapon, meat tenderizer…”

In contrast, convergent thinking occurs when there's only one answer to a question. Standardized tests, in which test-takers rely on memorization or logic to arrive at the correct conclusion, are one example. But the association of divergent thinking with creativity often dismisses the role of convergent thinking in, say, creative endeavors such as scientific innovation.

An alternative way of measuring creativity is to select people based on their occupation (architects versus accountants) or reception of creative accolades, such as the Pulitzer Prize. The issue with this approach, however, is that it’s difficult to determine whether people with mental illness are inherently more creative or whether the solitude of artistic endeavors increases the incidence of depression and mood disorders. In other words, it’s difficult to disentangle cause from effect.

More creative people also have greater difficulty suppressing the precuneus, a brain region within the default mode network that is particularly active when our mind wanders or during periods of self-reflection. Increased precuneus activity allows more information to flood the brain, enabling distant associations to be made. Researchers have detected reduced suppression of the precuneus during memory tasks in people with schizophrenia and their close relatives.

Some researchers argue that only mild cases of psychopathology are associated with increased creativity. Such individuals are thought to occupy a position on the spectrum where their symptoms do not mediate a diagnosis but are strong enough to facilitate creative thought. This corresponds to research from 2014 showing a negative correlation between mental illness and creativity, potentially because severe symptoms hamper productivity.

A Swedish study, published in 2012, followed approximately 1.2 million people over several decades but found almost no increase in psychiatric disorders among people who held creative jobs (outside of a small increase in bipolar disorder). However, the authors did note that a significant proportion of first-degree relatives of psychiatric patients occupied scientific and artistic professions, suggesting that milder traits of mental illness may be conducive to creativity.

The idea that both mental illness and creativity are linked at the genetic level forms the basis of the shared vulnerability model. The model suggests that a common biological cause can give rise to either psychopathology or creativity depending on the presence (or absence) of protective factors, such as social support or a high IQ. The identification of genes associated with both conditions, such as neuregulin 1, support the shared vulnerability model.

This may also explain why psychopathologies such as schizophrenia have persisted throughout evolution, despite associations with reduced fertility and having fewer children. Creative thinking gave humans a huge evolutionary advantage. It spurred innovation, allowing us to develop tools to build looms, railways and — eventually — smartphones. A shared genetic link meant that when creativity aided survival, genes linked to mental illness were also propagated in the population.

While mild cases of mental illness may be linked to increased creativity, the association is complex and likely goes both ways. Even Vincent van Gogh, an epitome of the mad genius stereotype, was known to use painting to relieve symptoms of depression.

Art therapy has since been established as a psychological intervention for post-traumatic stress disorder, depression and other psychiatric illnesses. Being creative, whether through chiseling the likeness of an ancient Greek god from a marble slab or dancing in your living room, stimulates the release of dopamine and lowers levels of the stress hormone cortisol. It can also help us to communicate and come to terms with our emotions, without necessarily using words.

Romanticized notions of the wild-eyed scientist and disturbed artist don’t yet hold up to scientific scrutiny. The more mundane reality is that brilliance comes from a combination of originality, graft, determination in the face of failure and a supportive network — which opens the potential for creative genius to all.