The Kalash in perspective 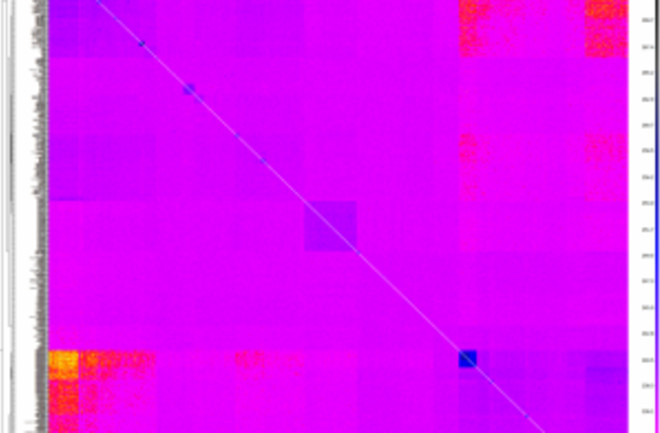 When Zack ran ChromoPainter/fineStructure on South Asians the results naturally yielded a blueish hue along the diagonal. This is expected because the diagonal represents the population's own relationship with itself. The bluer the diagonal, the more inbred and isolated the population is likely to be. To the top left you see various Austro-Asiatic tribes, in the middle the "Gujarati A" population from the HapMap (probably Patels), and in the bottom right various Pakistani groups, who presumably have higher rates of consanguinity than the South Asian norm. But one group stands out among the other Pakistani groups: the Kalash. They're highly endogamous because they're the last pagan population in Pakistan, isolated in the fastness of the Chitral. It is likely that if their region of Pakistan had been under Afghan, and not British, rule these people would have been forcibly submitted to Islam like their Nuristani cousins across the border 100 years ago. As it is I assume that at some point I may have to update these posts with the note that Pakistani Taliban forcibly converted the few thousand remaining Kalash to Islam. Such is the march of history in the abode of peace.

Religion may be a critical explanation for this isolation, because the similarly isolated Burusho of northern Pakistan are not nearly as inbred. Though the Burusho are speakers of a linguistic isolate, they adopted Islam ~500 years ago, and so are likely to have intermarried more frequently with outsiders. The Kalash isolation means that in some ways they're relatively useless in comparative genomic analysis. Though they are not an 'ancestral population' they routinely jump out as distinctive early on in PCA or ADMIXTURE/Structure/frappe analyses. In short, they are close to one large extended family. Nevertheless, they can be somewhat informative when these particularities are taken into account.

Presumably the Kalash are distant from other populations because of their isolation, but their relationship to other world populations will retain the same general conformation before their endogamous period. With that in mind I ran a narrow South Asian focused ADMIXTURE run. With ~400,000 markers I had: The Kalash, Burusho, Brahui, Pathan, Gujarati Patels, Hazara, Uygur, Russians, Japanese, Bantus of Kenya, Basque, Adygei, and Druze. Below are the results for K = 7 for selection:

Here are the Fst (genetic distances) between the various modal elements (labelled for convenience):

And some MDS's to illustrate:

Because of their light skin and hair both the Kalash and Burusho have inspired claims that they are "lost white tribes." This is almost certainly false for the Burusho. Aside from their moderate East Asian admixture, they're not so different from other Pakistanis in their region genetically. The older uniparental results confirm this; the Burusho have many characteristic South Asian mtDNA lineages. The Kalash mtDNA is almost totally West Eurasian, but looking at the "Kalash" component above you don't  see particular closeness to the Russian/European modal component in comparison to the South Asian ones. Yet looking through the images at the links above I think you'll be struck by how European some of the Kalash and Burusho seem in visible appearance, as well as how similar to each other they look (though the Burusho do sometimes show evidence of East Asian admixture, as you'd expect). This may simply be an artifact of Western photographers who are struck by the fact that "indigenous people" are capable of staring back at them with blue eyes, but it may also be local adaptation. The Kalash and Burusho almost certainly arise from the fringes of the ancient admixture between West Eurasians and South Eurasians, but their phenotype exhibits far less of the South Eurasian imprint than the lowland peoples of the Punjab. I have no good model for why mountains would foster such a phenotypic difference, but that's all I'm left with.

In the end the Kalash and the Burusho are the best refutation of the "blondes going extinct meme." The meme posits that the European physical characteristics par excellence are becoming submerged in a rising tide of color. The racial panic was explicit during the Victorian era, but more recently it has been sublimated and left inchoate because of the reigning ideology of multiculturalism whereby "right thinking" whites wouldn't dare express racial consciousness (despite clear revealed preferences). But the Kalash and the Burusho illustrate that even out of a period of admixture distinctive traits from one parental population can reassert themselves through stochastic (e.g., drift) or deterministic (e.g., selection) forces.