The Inherent Limits of MRI Tractography?

The creation of a comprehensive map of the connectional neuroanatomy of the human brain would be a fundamental achievement in neuroscience. However, creating this map remains a challenge... The introduction of diffusion-weighted MRI (DWI) and the diffusion tensor MRI (DTI) opened the possibility of exploring the structural properties of white matter in the living human brain.

Essentially, DWI promises to allow neuroscientists to map the connections between brain regions. These connections take the form of white matter pathways (or 'tracts'), which criss-cross the brain carrying neural signals. DWI seeks to image the white matter pathways by detecting the diffusion of water molecules along the tracts. To date, the performance of DWI has been mixed due to various technical limitations, but many neuroscientists hope that these will be overcome soon. Thomas et al. say, however, that even exceptionally high-quality diffusion MRI data just doesn't provide a very accurate white matter map. Their approach was simple: they took the dead brain of a rhesus monkey and performed diffusion MRI to map its white matter. The data quality was extremely high, because dead brains are immune to most of the sources of noise that affect living brains - head movement, blood flow, etc. As a known 'ground truth' or yardstick against which to compare the accuracy of DWI, Thomas et al. used anatomical tracer studies. Tracing is the old school way to map white matter - it's precise but time-consuming. It also can't be used on humans. Thomas et al. report that

Overall, even in ideal experimental conditions, the anatomical accuracy of DWI tractography is suboptimal... a diffusion tractography technique that produces anatomically accurate results remains an elusive goal even with DWI data of exceptional quality. The DWI data used here are of such high quality that, by our estimation, acquiring data of the same resolution from a living human brain in a standard MRI scanner would take thousands of hours of scan time. 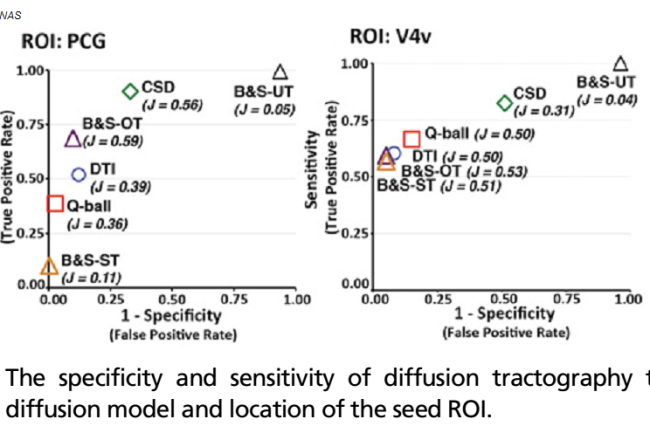 We believe our results highlight an inherent limitation of DWI tractography: inferring fiber direction information from a water diffusion displacement profile is fundamentally a complex, underdetermined inverse problem that cannot be solved.

The many hundreds of neuroscientists using DWI won't be pleased to hear this. I wonder if a rebuttal is in the works anywhere. I suppose one line of response might be to point out that Thomas et al.'s argument rests on the accuracy of the tracer technique in the rhesus monkey brain - can we be sure that it's always right?