The Hidden Messages in a Laugh 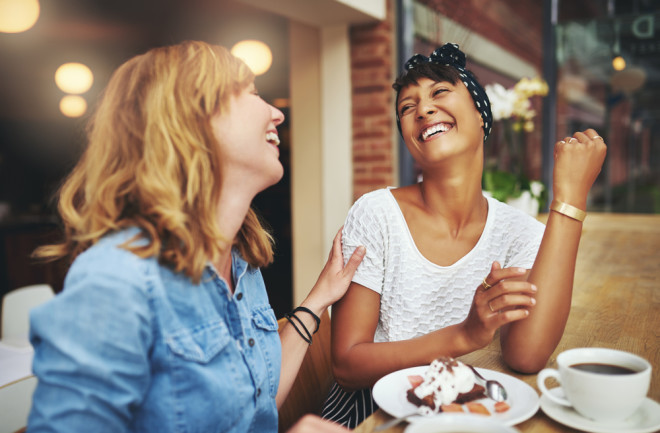 From hearty belly laughs to polite chuckles, laughter underpins our more enjoyable social interactions. And just like body language and facial expressions, laughter, too, is a physical reaction that’s loaded with subtext.

There are many ways to laugh out loud — some giggles are more heartfelt than others — and discerning the difference is a key social skill. For example, the way we laugh sounds very different when we are at a bar with friends versus a meeting at work. And, a new study shows, the different shades of laughter often hold enough information by themselves for us to discern key facts about the people yukking it up.

Researchers from the University of California-Los Angeles recorded 24 pairs of people interacting with each other — half of the pairs were friends, and half had just met. They took small snippets of laughter from these conversations and played them to 966 individuals from 24 societies around the world, ranging from the U.S. to Japan to Himba tribesmen in Namibia. Participants were asked to determine if the two people laughing were friends or not, based only on how their laughter sounded.

It’s All in the Laugh

On average, people could tell friends from strangers 61 percent of the time — significant, but not overwhelming. The real differences were when it came to gender. The pairs were divided into female-female, male-male and female-male groups, and participants from all cultures overwhelmingly stated that the pairs of females were likely to be friends. Guys who were recorded laughing together didn’t seem as friendly to study participants — they were more likely to be labeled strangers. The mixed-sex pairs fell somewhere in between.

Can you identify the authentic laugh in these two samples?

The study shows that our vocalizations differ depending on the situations we are in. Laughter was chosen, as it is a more impulsive response compared to speaking, so it is more likely to reflect how we actually feel.

Acoustic qualities such as louder laughs and greater variations of pitch and volume were noted in laughter between friends, characteristics of spontaneity and likely a result of greater familiarity and the accordingly lesser impulse to restrain our behavior. They published their results this week in the journal Proceedings of the National Academy of Sciences.

The study also highlights differences in how we think of friendships between the sexes. Lead author Greg Bryant said in a press release that the marked tendency to label laughing women as friends is likely related to studies showing that women take longer to form friendships that allow for carefree laughter.

If the women are relaxed enough to laugh around each other, the thinking goes, they must be friends. In this case, it may not have been the quality of the laugh that was important, but rather the fact that laughter was present. Still, with men and mixed-sex pairs, participants guessed correctly over half of the time, indicating that information about our thoughts and feelings is embedded within our laughter.

Bryant has also studied the differences between fake, or polite, laughter and genuine mirth. He found that we use different systems to produce different kinds of laughs, meaning that there are obvious differences between them. As our social interactions have gotten more complex, various non-verbal cues have emerged, some intentional, some instinctive, that give us insights into group dynamics.

Like it or not, how you laugh says a lot about you. By the way, the correct answer was sample B.