As sufferers of post-traumatic stress syndrome know all too well, frightening experiences can be strong, long-lasting and notoriously difficult to erase. Now, we're starting to understand why. Far from trying to purge these memories, the brain actively protects them by hiring a group of molecular bodyguards called CSPGs (or chondroitin sulphate proteoglycans in full). 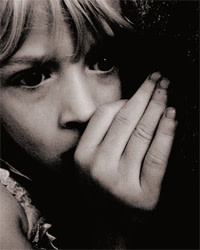 By studying the brains of rats, Nadine Gogolla from Harvard University found that CSPGs - large chains of sugars and proteins - accumulate in the space around nerve cells and form defensive nets around a select few. Dissolve these nets, and the rats' fearful memories were more easily erased.

The nets start to form round about the time when rats reach adulthood and their fearful memories become harder to erase. As adults, rats can learn to be scared of an inoffensive sensation, like the sound of a buzzer, for the rest of their lives, if it's paired with an unpleasant one, like an electric shock.

However, the strength of this terror starts to wane if the rats repeatedly hear the ominous buzz without any nasty consequences. This process is called extinction, but it's nowhere near as permanent or robust as the creation of the original fear. The minute the shock returns, the fear response recovers. This happens so quickly that the memory clearly hadn't been erased or overwritten - the rat had merely learned to block it out.

Things are different in puphood. Before their third week of life, a rat's fear memories can be easily erased; only afterwards do they become indelible. Gogolla thinks that the nets are the reason why. She looked at the brains of baby rats in their first month of life, and focused on their amygdala, a pair of almond-shaped structures that have roles in processing emotions. The number of CSPG nets in these regions shot up as the days went past, but particularly in the third week, when the switch from erasable fear memories to permanent ones takes place. That's no coincidence.

Using electrified floor panels, Gogolla trained the mice to fear a burst of white noise at different ages. All of them quickly picked up this new dread, and they all of them lost it if the white noise was played on its own. But for those who were trained before the 16-day mark, before most of their CPSG nets had formed, the memory stayed gone even when the shocks were reintroduced. However, for mice who were trained after the 23-day mark, their dormant fears came easily rushing back. 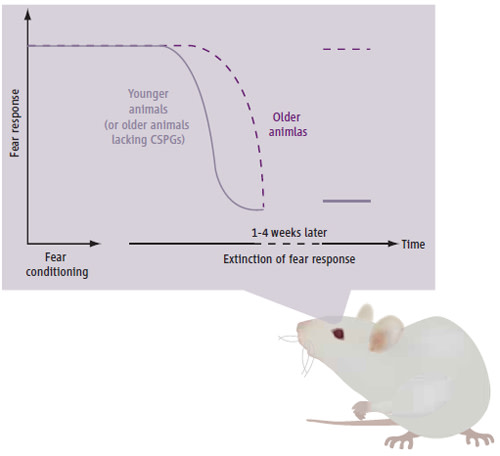 To clearly demonstrate the protection provided by the nets, Gogolla set about destroying them. She injected 3-month-old rats with an enzyme called chondroitinase ABC that breaks down CSPGs. A day later, all the nets had gone, as had the permanent nature of the rats' fear memories. They could learn to fear white noise just as other adults did, but the destruction of their nets had reset them to their childhood state when their fears could be easily and rapidly deleted. All it took was a couple of bursts of painless white noise, and the rats' fears vanished completely.

Gogolla found that the net-degrading injections only worked if they were given to the animals before their initial bout of fearful training. This means that the protective nets (and by extension, the enzymes that destroy them) fundamentally change the way that we lay memories down in the brain. With the nets, the memories are encoded in a way that later makes them difficult to erase.

We store these memories (at least in part) by strengthening the connections (or synapses) between different nerve cells. This strengthening process is known as "long-term potentiation" or LTP, and it was severely weakened by the injections that knocked out the CSPG nets. This implies that the nets affect how strongly fear memories are stored in the first place; they could also physically protect the strengthened synapses once they are formed.

The fact that the anti-net injections don't work on existing memories is absolutely critical. It means that you can't use these enzymes to get rid of fearful memories that rats already have. They can only act as a preventative measure against building permanent versions of such memories in the future. Even if the same thing worked in a human brain, we wouldn't have a ready-made way of erasing traumatic memories. At most, it could provide a way for preventing permanent fears from consolidating in the minds of people who are prone to such things, such as those who suffer from anxiety disorders.