The Formula for Love, Plus the Best of V-Day Science 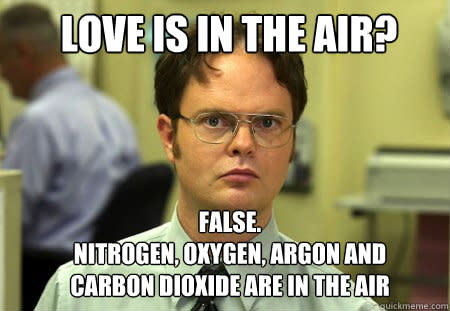 Hey, Internet. It's science here wishing you a happy Valentine's Day. And we do mean happy---we wouldn't be here if there weren't any oxygen in the air right? Let's start with a pretty picture. Copy all of the below mathematical function and enter it into Google. Just do it.

...and links to the best V-Day science out there: You Can Die of "Broken Heart Syndrome" That soap opera cliche of someone clutching their chest and kneeling over dead after finding out a dead lover has some science behind it. Sudden shocks---even positive ones like winning the lottery---can cause a massive release of adrenaline, causing the heart to freeze up. The hearts of patients who die from this take on a distinctive shape resembling a Japanese octopus trap, which is where the name takotsubo cardiomyopathy comes from. Why We Celebrate Valentine's Day: Naked Romans Every year on Valentine's Day, writers dig up the origin of the holiday to talk about naked Romans. Sorry, we're not immune to it either. Those pagan Romans used to run around naked with whips, hitting young women to increase their fertility. (Seriously? Dinner plans are looking so much better now.) Then, the Church pegged that pagan celebration to the story of St. Valentine, so today we have chocolate and roses and singing valentines. We're not really sure what those have to do with St. Valentine either. The Dark Side of the Love Hormone The "love hormone" oxytocin makes you more empathetic and generous and, as it turns out, also more racist and less trustful. Huh? Ed Yong, who's covered this before on his blog, writes on the latest hypothesis about oxytocin at New Scientist. Instead of just making us feel cuddly, it helps direct our attention to salient social cues in the environment. And what's salient, of course, depends on the environment. Most Popular Breakup Songs According to Facebook Since Facebook tracks both your relationship status to and what songs you listen to when (among other things), they put it together and released a list of most popular songs when starting new relationships and breaking up. We're only surprised that Adele doesn't have a monopoly on the breakup list.

Physical Theories as Women (and Men!)

Oldies but goodies. Two pieces comparing the types of men and women you date with the types of physics you might encounter. Did you know that the derivative of acceleration is called jerk? Just saying some of these remind us of that. Elsewhere on DISCOVER, you've got the hearts of space (love really is universal), animals that don't have sex (sex is not so universal), and right here on Discoblog's NCBI ROFL is the Valentine's week archive. Get lovin'.