The Evolution of Neuroimaging

A fun new paper looks at the changing landscape of neuroimaging research through an analysis of the journals Neuroimage and PNAS. The article comes from UPenn researchers Jordan D. Dworkin, Russell T. Shinohara and Danielle S. Bassett.

Dworkin et al. created a network analysis of keywords from the 8,547 Neuroimage papers that were published between 2008 and 2017. This analysis produces a graph in which the nodes are keywords (topics) and the edges (connections) reflect the tendency for those keywords to be mentioned in tandem. 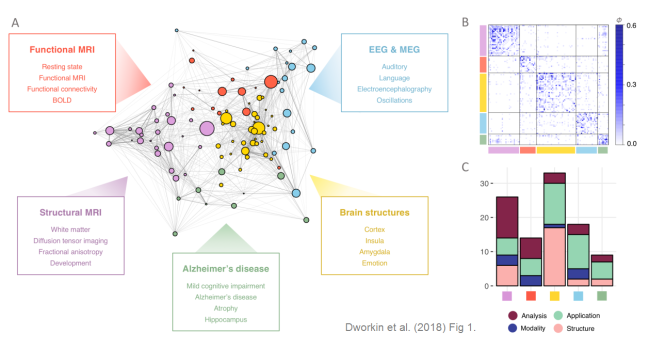 Here we can see the top 100 Neuroimage keywords grouped into five umbrella categories (panel A) and the connections between those topics (panel B). Of note, Alzheimer’s disease is the only neurological or psychiatric disorder to have its own category, and Alzheimer’s topics tend to be mentioned alongside structural MRI.

Next, Dworkin et al. looked at how the Neuroimage topic network has changed over time 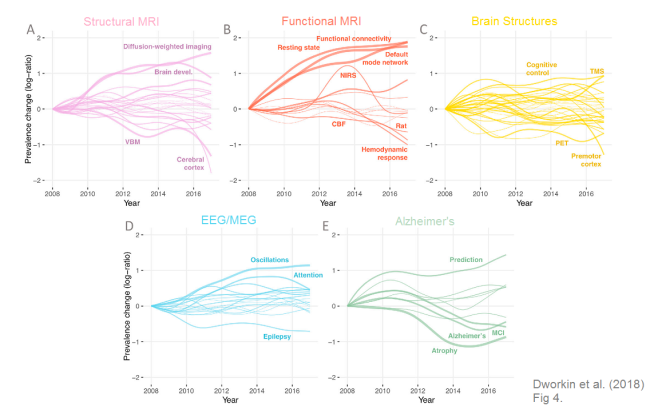 Notable here is the rise of functional connectivity, resting state fMRI, and the default mode network (DMN) within the fMRI category, as well as the decline of voxel-based morphometry (VBM) as a topic in structural MRI.

The change in the popularity of a particular topic over time was strongly correlated with changes in the popularity of its neighbors. Dworkin et al. used this fact to point our three topics which might soon show increased popularity: ‘independent component analysis’, ‘effective connectivity’, and ‘semantic’, each of which have increasingly popular neighbors but haven’t themselves seen much growth yet. Overall, this is, as I said, a fun paper. It’s just an analysis of two journals so we can’t draw any big conclusions from these results, and they largely confirm what most people in the field would have already noticed regarding the rise of certain hot topics. There is some more detailed analysis of the graph properties predicting changes in topic popularity which I think does give more novel results, and it will be interesting to see if they replicate for other journals.