The Ethics of Research on Leaked Data: Ashley Madison

A paper just published reports that Republicans are more likely to have used the adultery website Ashley Madison than Democrats, while Libertarians were even more likely to do so. That's a claim that could ruffle some feathers, but the way in which the researchers conducted this study might be even more controversial. That's because this paper is based on the 2015 Ashley Madison data leak, which exposed the personal data, including names and credit-card details, of millions of registered users. For this study, the authors, Kodi B. Arfer and Jason J. Jones, took the leaked data and matched it up against voter registration records for five U.S. states. They considered a voter to be an active Ashley Madison user if they had ever paid money to the website. About 1 in 500 voters met these criteria. Those voters registered as Libertarians were most likely to be active users, even controlling for age, gender and state. Registered Republicans came next and Democrats were least likely. 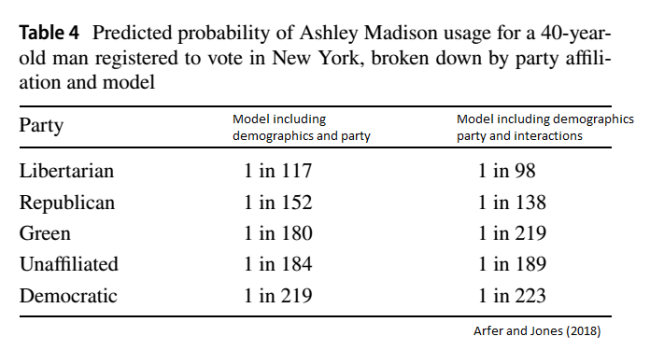 Arfer and Jones conclude, provocatively, that:

Our results are perhaps the strongest evidence yet that people with more sexually conservative values, although they claim to act accordingly, are more sexually deviant in practice than their more sexually liberal peers.

Personally I wouldn't put too much stock in these results, partly because there are innumerable confounding variables that weren't considered in these models, but mainly because, as the authors themselves point out, Ashley Madison usage is rare but adultery is far more common (e.g. 21% of husbands in the General Social Survey, by self report). It's not clear that Ashley Madison use is a good proxy for actual adultery, in other words. But what certainly is interesting about this study is the ethics. In the paper, Arfer and Jones do not mention that any ethics committee/IRB approved their study [edit: but see the comments below: "We did get IRB approval, from a UCLA IRB. They certified the study as exempt from review (because it didn't involve new data collection or interacting with subjects), although my understanding is that there was actually a full committee review"] I wouldn't think they needed approval though, because they didn't collect any new data from human participants. The authors do discuss the ethics of their work, briefly. Acknowledging that the original data leak was an unethical and illegal breach of privacy, Arfer and Jones go on to say that this doesn't make using the data wrong:

We believe that using data that were originally collected unethically is itself ethically permissible. To forbid such use would be closing the stable door after the horse has bolted. In the case of [Ashley Madison] in particular, not only have the data already been publicly available since 2015, it has been widely discussed in the news (e.g., Biddle, 2015; Lamont, 2016; Victor, 2015), with some reports even describing how to obtain and use the data (e.g., Paton, 2015; Prince, 2015). We cannot undo the past, but we can make the most of the present by getting what social and scientific value we can out of undesirable events, whether those events are natural disasters, disease epidemics, or human wrongdoing.

Hmm. It's a tricky ethical question, but I'm not sure I'm happy with this 'horse has bolted' answer. Publishing this study of the data might be seen as rubbing salt into the wound of those who were exposed in 2016, for instance.