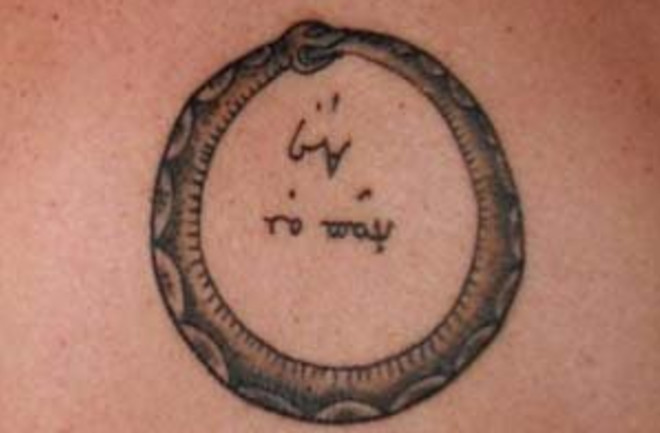 Angela write: "As an Archaeologist, I wanted my first tattoo to be something related to culture. The Ouroborus is an ancient symbol of a serpent biting its tail and has been a part of a number of cultures and beliefs including (but not limited to!) Egyptian, Greek (who "borrowed" it from the Phoenicians and gave it the name "ouroborus" meaning "tail-eater"), Norse, Chinese, Aztec, Hindu, and various Native American Indian mythologies. The snake in my tattoo is a custom piece by my tattooist, but the writing is straight from the earliest-known drawing of the Ouroborus in the Chrysopoeia of Cleopatra drawn around 1600BC. The Ouroborus has carried a number of meanings; the cyclical nature of the universe (the serpent eating its own tail to sustain itself), infinity and eternal unity (the text is translated as both "one is all" and "all is one" or even "the one, the all"), reincarnation, in Alchemy it is a purifying sigil, in Christianity it is a symbol of the confines of the physical world, and the serpent is often depicted with light and dark sides to it (i.e. yin and yang). In many myths, the serpent encircles the world - a myth that may have been inspired by those times of the year during which the Milky Way can be seen winding through the night sky, like a great snake. I chose this for my first tattoo because I have always been fascinated by cross-cultural symbols and one that encompassed so many meanings was particularly interesting to me."