The Erogenous Zones of The Brain

A paper just published in the journal Cortex discusses the nature of human erogenous zones: Reports of intimate touch

The results cast doubt on a number of popular theories about this topic – including one from a leading neuroscientist.

Oliver Turnbull and colleagues of Bangor University in the UK had 793 volunteers anonymously complete an online questionnaire. The participants were recruited from the UK and South Africa; they were mostly students. Volunteers rated each of 41 body parts on a scale of 1-10 for “ability to facilitate sexual arousal”.

It turned out that, across genders, sexual orientations, and nationalities, everyone agreed that the genitals were top, followed by mouth/lips, with nipples, nape of neck and thighs also highly placed. The correlation coefficients for average ratings across pairs of groups were extremely high at 0.9 or above: people agreed with each other.

Agreement on the most unerogenous zones was also strong: these included the elbow, shin, knee-caps, nose, and forehead. Makes sense.

The level of agreement counts against the popular belief that men and women have substantially different erogenous zones. Though women didscore a few areas – namely the highly ranked non-genital ones – more highly out of 10 than men.

The authors also say that their finding disproves the theory that feet are erogenous zones because the brain area responsible for feet sensation overlaps with the area representing genitals.

The ‘hot feet’, hypothesis, proposed by neurologist and hypothesis-proposing machine V. S. Ramachandran (see previous posts) in “Phantoms in the Brain”, was inspired by the fact that feet lie adjacent to the genitals in the ‘map’ of the body found in the primary somatosensory cortex (S1) which is where touch sensation is first processed in the brain.

You can see this on the famous sensory homunculus: 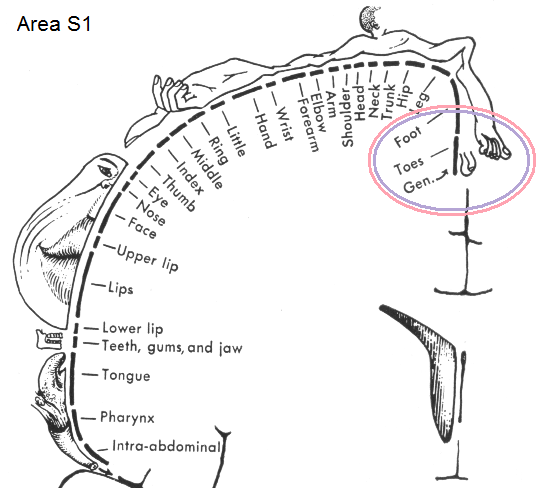 So activity “spillover” is unlikely to explain erogenous feet, even in any people who do experience the phenomenon.