Last month, a neuroscience paper appeared that triggered a maelstrom of media hype:

The paper, published in Frontiers in Computational Neuroscience, comes from the lab of Henry Markram, one of the world's most powerful neuroscientists. As well as being head of the Blue Brain Project at the École Polytechnique Fédérale de Lausanne, Markram founded the €1 billion Human Brain Projectand co-founder of scientific publishing giant Frontiers. The new paper is fascinating. But the headlines were completely misleading: this paper has nothing to do with multiverses and very little to do with anything 11-dimensional. The paper is actually all about "cliques" of neurons. A clique is simply a group of neurons, each of which is connected to all of the others. Here's a diagram (graph) showing a hypothetical clique of 5 neurons: 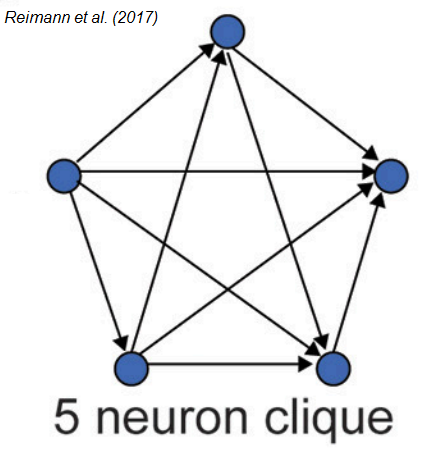 If these were real neurons, they would of course occupy 3-dimensional space, just like everything else in the universe. Now, mathematicians refer to a clique of 5 neurons as having a dimension of 4. This doesn't mean that five connected neurons occupy some mysterious fourth dimension. It just means that the graph of the connections could be depicted as a 4-dimensional object. But we could equally well depict it as a 2-dimensional diagram (seen above.) In general, a clique containing n nodes has a dimension of n-1. The nodes could be neurons or anything else. So where did the wacky multi-dimensional media coverage come from? It seems to have been prompted by the hype-filled Frontiers press release on this paper, called "Blue Brain Team Discovers a Multi-Dimensional Universe in Brain Networks." If you look beyond the headlines, the paper is actually pretty interesting, although it raises more questions than it answers. The big claim is that neural networks in the brain contain an unexpectedly high number of cliques, including large ones with a dimension of 7 (not 11, though.) 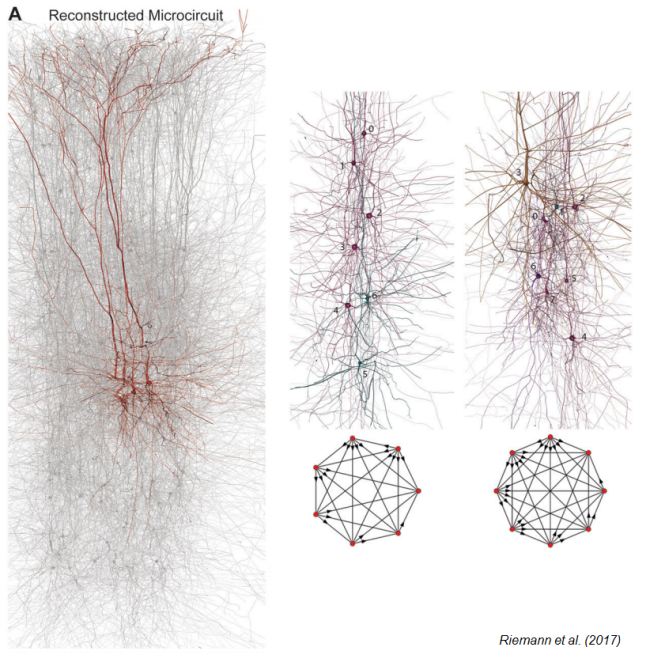 A caveat is that most of the work in this paper wasn't done in actual human brains, but rather in a computer simulation of a small chunk of rat cerebral cortex. The virtual neural network features 31,000 neurons and 8 million connections. The authors say that the simulation "closely resembles" the real rat cortex in many ways, but still, it's a simulation. The paper does contain some work on real neural networks (from rats and C. elegans worms) which confirms the presence of lots of large cliques. So what does the cliquey nature of nervous system mean? That remains to be seen. The authors suggest that cliques could be very important. Indeed, that they might be a unifying principle of the brain:

I wonder however whether cliques and cavities might just be a side effect of the fact that neurons don't connect to each other randomly throughout the brain, but are contrained by e.g. spatial proximity? If a group of neurons are physically close together, they are more likely to synapse with each other than with neurons far away, and so a clique could be formed just by proximity. Artzy-Randrup et al. (h/t) made this point back in 2004 in response to claims of complex network structures in the C. elegans nervous system:

Neurons are spatially aggregated and connections among neurons have a tendency to form in local clusters (15). Two neighboring neurons have a greater chance of forming a connection than two distant neurons at opposite ends of the network.

The authors of the new paper did consider a control condition, a simulation based on "distance-dependent connection probabilities between the different morphological types of neurons." They report that the 'real' rat cortex simulation showed more cliques than the control simulation. This suggests that the abundance of cliques is not just a product of proximity. But remember, this was all a simulation.