The Carrot, Not the Stick, Works Best to Encourage Cooperation 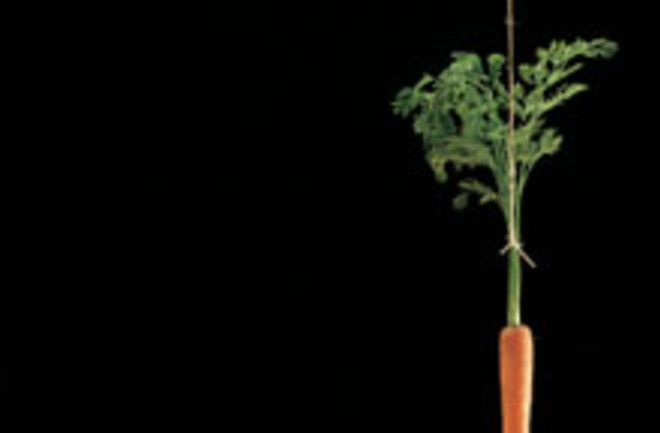 If you're trying to get people to work together, carrots may prove more useful than sticks--that is, rewarding cooperation might motivate people more than punishing them, according to a study published in Science. Test subjects played the "public goods game," in which they have to decide whether or not to donate money to the group's pot.

The pot is multiplied and redistributed equally, regardless of who contributes and who doesn't. When people play a pure version of the game, the temptation to freeload – reap the rewards without contributing anything – often leads to rapidly disintegrating cooperation [New Scientist].

Related Content: 80beats: Stressed Out Lab Rats Become Creatures of Habit 80beats: “Expert” But Bad Financial Advice Turns Off Decision-Making in the Brain 80beats: In Terms of Enjoyment, Other People Know You Better Than You DoImage: iStockPhoto

But researchers found that when players were given the choice to either reward their fellow players for good behavior, or punish them for failing to donate, rewarding others yielded a larger payoff for the group as a whole. G