The Brain: The Connections May Be the Key

Once we model the connectome—the million  billion points of contact between neurons in  the brain—we’ll glimpse the anatomy of the mind. 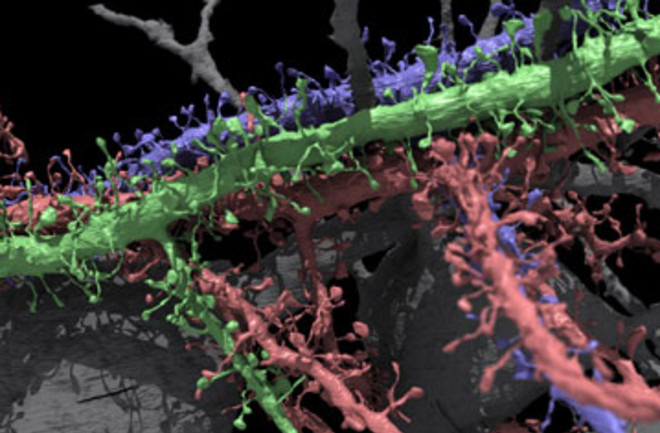 If I didn’t know Sebastian Seung was a neuroscientist, I would have pegged him as a computer game designer. His onyx-black hair seems frozen in a windstorm. He wears black sneakers, jeans, and a frayed bomber jacket over an untucked shirt covered in fluorescent blobs. If someone had blindfolded me on Vassar Street in Cambridge, Massachusetts, led me into Building 46 on the campus of MIT, past the sign that says Department of Brain and Cognitive Science, taken me up in the elevator to the fifth floor and whisked off the blindfold in Seung’s lab, I still wouldn’t have guessed he had anything to do with brains. There are no specimens floating in jars on the shelves. There are no electrodes plugged into the heads of sea slugs. Instead, I see a dozen young men gazing at monitors, some pushing their computer mice, others drawing tethered pens across digital tablets to manipulate 3-D images, each packed with more megabytes than a feature film on a Blu-ray Disc.

And there is Seung himself, gazing over the shoulder of postdoc Daniel Berger, whose monitor looks like a science fiction forest, with branches and trunks colored turquoise and cherry, floating unrooted in space. I almost find myself wondering when Seung’s next game will hit the stores.

But appearances to the contrary, Seung is an expert on the web of neurons that make up the brain. And the images he’s creating are part of an ambitious attempt to understand how the connections between those brain cells give rise to the mind. “How do you put together dumb cells and get something smart?” he asks.

Neuroscientists know that the brain contains some 100 billion neurons and that the neurons are joined together via an estimated quadrillion connections. It’s through those links that the brain does the remarkable work of learning and storing memory. Yet scientists have never mapped that whole web of neural contact, known as the connectome. It would be as if doctors knew about each of our bones in isolation but had never seen an entire skeleton. The sheer complexity of the connectome has put such a map out of reach until now.

The strange forest on Berger’s desktop is one small but crucial piece of the picture. It is just three neurons large—“a thousandth the width of a human hair,” Seung says—but it shows every detail of their connections down to the smallest bumps and spikes. Taking advantage of the latest advances in electron microscopy and computer-controlled imaging, Seung and his team are creating some of the most detailed three-dimensional reconstructions of cortical gray matter ever made.

Seung believes that by the end of this century, his successors will have mapped the connectome of an entire human brain. “Our descendants will look back on these achievements as nothing less than a scientific revolution,” he writes in his new book, Connectome: How the Brain’s Wiring Makes Us Who We Are. As scientists gain the power to see the brain in its full complexity, he argues, they will finally be able to answer some of the most fundamental questions about the mind.

The breakthrough has been a long time coming. The first accurate pictures of the human brain date back to the 1660s, when English physician Thomas Willis published anatomical images created by his assistant, medical illustrator Christopher Wren. Those pictures helped destroy the ancient belief that animal spirits pumped through hollow chambers inside the brain. Yet the microscopes of Willis’s day were so crude that he couldn’t make out the fine structure of the brain’s cells. It wasn’t until the late 1800s that Camillo Golgi invented stains that could reveal details of individual neurons. Spanish scientist Santiago Ramón y Cajal then used Golgi’s stains to demonstrate that the brain is a thicket of branching cells, and he hypothesized that electricity jumped from one neuron to the next.

Ramón y Cajal made the most of the technology of his day, but he could not see the actual points of contact between neurons—what came to be known as synapses. Later generations of scientists had to infer the location of synapses from experiments. It was from those experiments that the modern theory of the mind emerged. In the mid-1900s, neuroscientists proposed that learning causes a physical rearrangement of the brain’s structure: New synapses form between some neurons, while existing ones grow stronger or die out. In 1949 Canadian neuroscientist Donald Hebb proposed that learning leads groups of neurons to form tight connections with each other. These so-called cell assemblies, he argued, are what store memories.

For Seung, the brain’s ability to produce memories and other features of the mind has always been an irresistible mystery. It was enough to lure him from a budding career as a physicist to build brainlike computer models based on the concepts of Hebb. His computer models were able to learn, so Seung wondered if there might be a way to test those models against the actual connectome to see if Hebb’s assumptions were right.

There was just one problem: Nobody knew what the connectome looked like. MRI scans can capture the entire brain, but they can get down to a resolution of only a few cubic millimeters, not nearly fine enough. Other methods, such as staining, allow scientists to look at one neuron at a time but not to track the broader links between them. Seung needed a way to see every neuron in a given piece of brain tissue.

He found the way by teaming up with scientists who know how to slice brains very, very thinly. Jeff Lichtman, a neuroscientist at Harvard University, has built a device called an ultramicrotome that uses a diamond knife to shave brain tissue layer by layer. The ultramicrotome then affixes each slice to a tape that gets fed into a microscope. The microscope takes a high-resolution picture that Lichtman and his colleagues send to Seung’s lab.

Each image is a few hundredths of an inch across, but it’s packed with neural cross sections. Stacking hundreds of thousands of layers against one another can create a three-dimensional model of a piece of the brain. To render a final model, Berger and others inspect every image by eye, coloring each individual neuron in its own specific shade. Once finished, a layer is aligned to the next one, with the same neurons colored the same shades.

Such images contain details far beyond what had ever been seen before. But mapping a few neurons does not give Seung enough data to go after the really big questions about the brain. “There’s a critical scale we have to get through for this to be valuable at all,” he says. That scale, Seung suspects, is about one cubic millimeter: a pinch of brain tissue that could sit atop the period at the end of this sentence. A hundred thousand neurons can fit inside that volume, making about a billion connections with each other. Mapping the connectome inside a cubic millimeter of brain tissue would give Seung enough data to make statistically significant observations about how neurons are connected.

If memories really are encoded in cell assemblies the way Hebb claimed, Seung should be able to observe those assemblies (pdf). He will, in effect, be able to see memories in the brain’s cells.

Painting the neurons by hand, as Berger did, is far too time-consuming, so Seung accelerated the mapping by programming computers to scan brain layers and automatically recognize the neurons in them (pdf). Computers also make lots of mistakes, but those errors leap out when humans look at the models. Instead of painters, Seung and colleagues have become proofreaders.

The collaboration between humans and computers has sped the process along. Instead of weeks, it now takes only a matter of days to map an individual neuron. If Seung can find ways to speed things up further, he may be able to reach his 100,000-neuron mark in a few years.

It would be simple enough, he suggests, for neurosurgeons to set aside a smidgen of tissue removed during human surgery. Then Seung could see if the patterns of connections are different in the brains of healthy people and those with autism, schizophrenia, and other disorders. These connectopathies, or wiring defects, might cause the brain to malfunction as it processes information, shuttling signals from neuron to neuron.

Seung expects that when scientists scale up to a full human brain, in the next few decades, they’ll finally be able to investigate the deep workings of the mind and address questions that, for now, belong more to the realm of philosophy. “Is it true that you are your connectome?” Seung asks. One way to find out would be to model a person’s brain in a computer. If it were detailed enough, it might be able to function like the original brain. Would it contain the same memories stored in cell assemblies? Could you upload yourself to a computer to escape death?

Seung thinks these questions can be tested, but he doesn’t dwell on them. Instead he is focusing on his millimeter-map milestone. To hit that mark, he will need bigger, faster computers. Shaving a cubic millimeter of brain tissue would yield a petabyte of data. That’s a quadrillion bytes—enough to store more than 50 years’ worth of high-definition movies. If the cost of computer memory continues to fall, Seung should be able to store that much data in a few years.

But better technology alone won’t get Seung to his connectome. “The challenge is analyzing them,” he says. Toward that end, he’ll need a lot more eyeballs. The more people who can proofread his connectomes, the faster his maps will grow. As a result, he and his colleagues have set up a website where the public can pitch in.

“We’re trying to gamify it,” Seung says. He may end up being a computer game designer after all.