The Brain: A Body Fit for a Freaky-Big Brain

Human biology reorganized itself to cope with the punishing burden of our oversize thinking parts. That shift completely reshaped who we are. 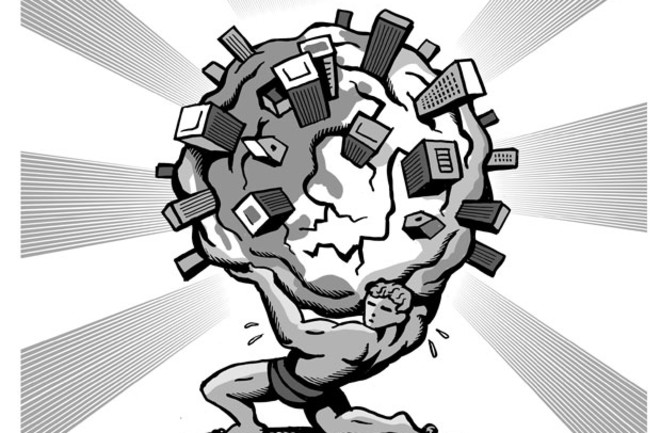 In 1758 the Swedish taxonomist Carolus Linnaeus dubbed our species Homo sapiens, Latin for “wise man.” It’s a matter of open debate whether we actually live up to that moniker. If Linnaeus had wanted to stand on more solid ground, he could have instead called us Homo megalencephalus: “man with a giant brain.”

Regardless of how wisely we may use our brains, there’s no disputing that they are extraordinarily big. The average human brain weighs in at about three pounds, or 1,350 grams. Our closest living relatives, the chimpanzees, have less than one-third as much brain—just 384 grams. And if you compare the relative size of brains to bodies, our brains are even more impressive.

As a general rule, mammal species with big bodies tend to have big brains. If you know the weight of a mammal’s body, you can make a fairly good guess about how large its brain will be. As far as scientists can tell, this rule derives from the fact that the more body there is, the more neurons needed to control it. But this body-to-brain rule isn’t perfect. Some species deviate a little from it. A few deviate a lot. We humans are particularly spectacular rule breakers. If we were an ordinary mammal species, our brains would be about one-sixth their actual size.

Competing theories seek to explain the value of a big brain. One idea, championed by psychologist Robin Dunbar of the University of Oxford, is that complicated social lives require big brains (pdf). A relatively large-brained baboon can make a dozen alliances while holding grudges against several rivals. Humans maintain far more, and more complicated, relationships.

Managing a social network can yield significant benefits: When a fight breaks out, it pays to have friends at your back. But keeping tabs on one’s social life requires effort. Dunbar and his colleagues have found that it takes longer for people to answer questions when they have to think about what’s going on in other people’s minds. And the more “mind reading” a question requires, the more it activates the brain.

A different perspective comes from Daniel Sol of the Center for Terrestrial Ecology and Applied Forestries in Barcelona, Spain, who studied the introduction of animals to new habitats. Comparing successful and unsuccessful invaders, he found that in both birds and mammals, big-brained species are more likely to be successful than are small-brained ones (pdf). This research suggests that larger brains are more adept at problem solving, which translates into a better chance of survival.

It is possible that both Dunbar and Sol are at least partially correct. But no matter how the debate resolves, a puzzling question remains: If big brains are so useful, then why are they relatively rare? The answer is that nothing in nature comes for free—and where the brain is concerned, the cost can be enormous. In fact, scientists are discovering that a lot of human biology has reorganized itself to cope with the burden of an oversize brain.

in 1995 Leslie Aiello, then of University College London, and Peter Wheeler of Liverpool John Moores University offered the first possible reason for the rarity of big brains. Neurons, they pointed out, have a voracious appetite. They require lots of energy to produce their voltage spikes and to release neurotransmitters. They get that energy from oxygen and food, mostly glucose. A three-pound human brain burns up to 20 times as many calories as three pounds of muscle.

We cannot ignore this demand, even for a moment. A few minutes without oxygen may not do too much damage to our muscles but can irreparably harm the brain. The brain also requires a constant supply of food. Twenty-five percent of all the calories you eat each day end up fueling the brain. For a newborn infant, with its little body and relatively large and fast-growing brain, that figure leaps to 87 percent.

evolved. The first members of our genus that looked like us,  H. erectus stood about as tall as modern humans, with brains that weighed around 900 grams. A half-million years ago, the brains of our ancestors started to grow again; 200,000 years ago they finally reached about the same weight as Homo sapiens brains today.

Aiello and Wheeler noted that this dramatic increase in brain size would seem to have required a dramatic increase in metabolism—the same way that adding an air-conditioning system to a house would increase the electricity bill. Yet humans burn the same number of calories, scaled to size, as other primates. Somehow, Aiello and Wheeler argued, our ancestors found a way to balance their energy budget. As they expanded their brains, perhaps they slimmed down other organs.

The scientists compared the sizes of organs in humans and other primates. Relatively speaking, our liver is about the same size as a baboon’s. Our heart is on par with a gorilla’s. But our guts have shriveled. They weigh only 60 percent of what you’d expect in a primate of our size. Intestinal cells also need a lot of energy, because they are highly innervated. Losing such a big portion of their guts could have allowed our ancestors to compensate for much of the brain’s extra energy demand.

Aiello and Wheeler christened their idea “the expensive tissue hypothesis.” To test it, they compared the size of brains and guts in a range of primate species (pdf). They found that the bigger a primate’s brain relative to the species’s overall body size, the smaller the guts tend to be. This consistent trade-off suggested that trimming our guts was essential to supersizing our brains.

Then William Leonard, a biological anthropologist at Northwestern University, put the expensive tissue hypothesis to a new test. Instead of correlating brain and gut size across primate species, Leonard decided to look at mammal species overall. Beyond the primates, he found, there existed no correlation whatsoever between brain size and gut size.

This suggested that the gut-shrinking phenomenon within the primate groups was probably too subtle to explain our increase in brain size completely. Something else had to be going on as well. That something, Leonard says, is diet. After studying the diets of primate species and tallying the quantity and quality of food consumed, Leonard found a switch from lower-energy diets of bark and leaves to higher-energy cuisines of seeds, tubers, and meat in the brainier species. As brain-to-body ratio increases, presumably, the denser calories supply the additional needed fuel.

Greg Wray, an evolutionary biologist at Duke University, is finding secrets to big brains in an entirely different place: the human genome. One of the genes involved in feeding the big brain, called SLC2A1, builds a protein for transporting glucose from blood vessels into cells. It is vital to the brain’s well-being. Mutations that reduce the number of transporter proteins in the brain lead to disorders such as epilepsy and learning disabilities. If one copy of the SLC2A1 gene is completely dysfunctional, the results are devastating: The brain develops to only a portion of its normal size. If neither copy of the gene works, a fetus simply dies.

Wray and his colleagues compared SLC2A1 in humans and other animals. They discovered that our ancestors acquired an unusually high number of mutations in the gene. The best explanation for that accumulation of mutations is that SLC2A1 experienced natural selection in our own lineage, and the new mutations boosted our reproductive success. Intriguingly, the Duke team discovered that the mutations didn’t alter the shape of the glucose transporters. Rather, they changed stretches of DNA that toggled the SLC2A1 gene on and off.

Then he looked at glucose transporters that deliver the sugar to muscles. The gene for these muscle transporters, called SLC2A4, also underwent natural selection in humans, but in the opposite direction. Our muscles contain fewer glucose transporters than in chimps’ muscles. Wray’s results support the notion that our ancestors evolved extra molecular pumps to funnel sugar into the brain, while starving muscles by giving them fewer transporters.

Becoming Homo megalencephalus was hardly a simple process. It was not enough for evolution to shrink our gut and shift our diet. It had to do some genetic engineering, too.

Carl Zimmer is an award-winning biology writer and author of The Tangled Bank: An Introduction to Evolution

, among other books. His blog, The Loom, runs at blogs.discover magazine.com/loom