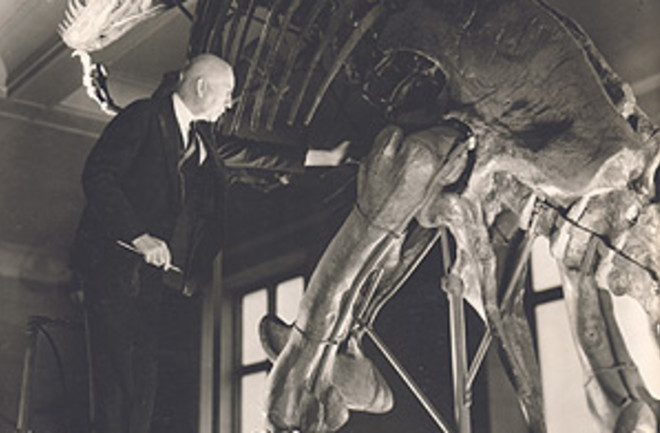 Barnum Brown examines the skeleton of Tyrannosaurus rex, mounted in its original misguided “Godzilla” pose. All images © American Museum of Natural History and the Department of Vertebrate Paleontology, AMNH

On a December morning in 1898, a 25-year-old paleontologist named Barnum Brown trudged through the snow-choked streets of New York City for what he thought would be a routine day at the American Museum of Natural History. But before he could remove his hat, his supervisor, Henry Fairfield Osborn, anxiously summoned him. “Brown,” he said, “I want you to go to Patagonia today with the Princeton expedition . . . to represent the American Museum. The boat leaves at 11; will you go?” “This is short notice,” Brown replied. “But I’ll be on that boat if . . . I [can] go home to pack my personal belongings and arrange for my absence.”

Although he had never been out of the country before, Brown did not return for almost a year and a half. In Patagonia he prospected for fossils largely on his own. On one excursion, he was shipwrecked off the Patagonian coast when a large wave slammed his small cutter; despite not knowing how to swim, Brown floated safely to shore grasping a barrel. By befriending the locals, he got his project back on track and eventually shipped 4.5 tons of fossil mammal bones back to the museum. Brown’s gamble—to strike out by himself to search for fossils in a foreign land—established a precedent for his expeditions and launched his legendary career..

Among paleontologists, Barnum Brown is almost universally recognized as the greatest fossil collector of all time, and although his name is no longer widely recognized among the general public, the name of the most famous dinosaur he ever discovered—Tyrannosaurus rex—most certainly is. The fossils he unearthed across continents from the Americas to Asia vastly expanded our knowledge not only of the evolution of dinosaurs but also of most major groups of reptiles and mammals. Crucial to his success was a penchant for eccentricity and risk, both professionally and personally. His expeditions, many of which he undertook with little or no backup, even from his trusted companions, led him to several of our planet’s most remote and dangerous regions. As if that weren’t risky enough, Brown often used his guise as a bone digger to cover a second, clandestine role as an American intelligence agent, gathering strategic geologic and geographic data that would aid both the country’s exploration for oil and the government’s war efforts.

Brown led many expeditions, including one to Wyoming in 1903 (top). In Montana he unearthed the skull of Tyrannosaurus rex in 1905 (below).

But Brown’s first priority was always fossil hunting. His finds are still used to investigate major questions in paleontology, and some of his ideas—including a radical insight about the intimate relationship between dinosaurs and birds—today seem almost uncannily prescient. As paleontologists with access to the archives of the American Museum of Natural History, we have a unique opportunity to look back a century later on his discovery of the world’s most famous dinosaur. Perhaps more surprisingly, we still have an intimate relationship with Brown, whose techniques, theories, and discoveries are continuing to help us understand the era when reptiles ruled the earth.

Brown led many expeditions, including one to Wyoming in 1903 (top). In Montana he unearthed the skull of Tyrannosaurus rex in 1905 (below).

Barnum Brown’s passion for paleontology began early. Born in 1873, he spent his childhood in eastern Kansas, in a landscape whose hills rippled with exposed coal seams. Hired hands helped his homesteading father run a small-scale strip-mining operation; as Brown recalled, this opened a window on a captivating ancient world of fossils. “They unearthed vast numbers and ­varieties of seashells, crinoid stems and parts, corals . . . and other sea organisms,” he wrote. “I followed the plows and scrapers, and obtained such a large collection that it filled all of the bureau drawers and boxes until one could scarcely move. Finally Mother compelled me to move the collection into the laundry house.”

His interest in fossils found a natural outlet at the University of Kansas, where Brown studied both paleontology and how fossil fuels were formed and mined. During summer recesses in the mid-1890s, he joined the university’s field trips to the big badlands of South Dakota and the plains of eastern Wyoming. In the summer of 1896 he hooked up with a field crew from the American Museum of Natural History and prospected for mammal fossils in both New Mexico’s San Juan Basin and Wyoming’s Bighorn Basin. Impressed with his skills, the museum hired Brown, even though he had not yet finished his undergraduate education.