Want a boy at all costs? The secret may lie in your glucose levels 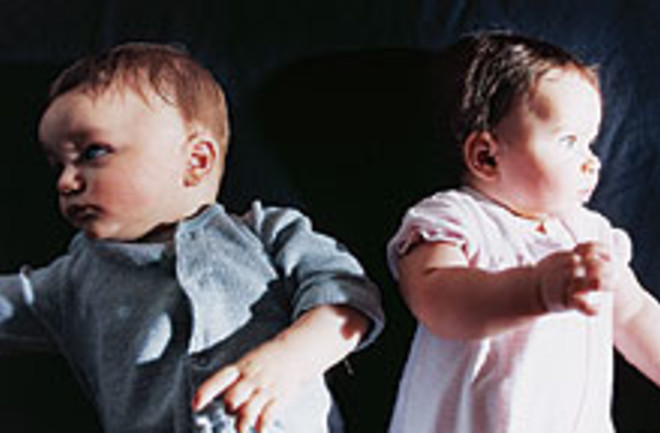 Would you rather have a boy or a girl? Photographer Elinor Carucci fulfilled both wishes at once and is the proud mother of twins Eden (left) and Emmanuelle. Elinor Carucci

Some couples worry—a lot—about whether they will have a boy or a girl. So they try any number of strategies to influence nature’s choice. Folklore says eating more red meat increases the chance of having a boy. So does having sex standing up or during the quarter moon or on odd-numbered dates. A diet of fish and vegetables, on the other hand, is said to produce girls—as does having sex when the moon is full or the date is even. Some popular books say having sex during ovulation is likely to produce a girl, others that it more often leads to a boy.

These techniques may seem laughably unscientific, but the idea of influencing a child’s sex is not. Hundreds of scientific studies have shown that insects, reptiles, birds, and mammals unconsciously influence the sex of their offspring, producing more males at times and more females at other times.

In 1973 two Harvard scientists, biologist Robert Trivers and mathematician Dan Willard, came up with an evolutionary theory to explain this behavior. If a pregnant woman is strong and likely to bear a healthy child, they noted, she’s better off having a boy: Healthy males tend to have many more offspring than weaker males. If a mother is weak and apt to bear a weak child, it is to her evolutionary advantage to have a girl: Even the least robust females tend to have some offspring, whereas the weakest males may never mate. Natural selection should therefore encourage mothers in poor condition to bear daughters and those in prime shape to have sons.

In the 32 years since the Trivers-Willard hypothesis was published, it has spawned more than 1,000 reports of evidence for it and (less often) against it, in animals and people. A review of 10,000 human births in Italy, for instance, found that mothers who weighed the least before becoming pregnant had 3 percent more daughters than heavier women did. Among women living in a small Ethiopian community, those with the most fat and muscle mass in their upper arms were more than twice as likely to have boy babies as those women with the thinnest arms. Single American mothers, who tend to have fewer resources than those who are married, have boys less than half the time, while married women have them 51.5 percent of the time. Other research has shown that women who smoke cigarettes or ingest a lot of PCB-contaminated fish bear more girls.

A few years ago, John Lazarus, a biologist at the University of Newcastle upon Tyne in England, reviewed 54 studies of sex ratios in humans. He found that 26 supported the Trivers-Willard hypothesis, one found evidence against it, and the rest found no effect. The evidence in animals follows the same equivocal yet supportive trend. In a recent review of 422 mammal studies, Elissa Cameron, a mammal ecologist at the University of Nevada at Reno, found that 34 percent of the studies supported the idea that a mother’s condition can affect the sex of her offspring. Only 8.5 percent found the opposite. Most of the studies found no proof either way.

Cameron had earlier spent four years as a graduate student at Massey University in New Zealand, observing wild horses in the Kaimanawa Mountains. She correlated sex ratios of foals with their mothers’ condition at three different points: at conception, halfway through their 11-month pregnancies, and at the foal’s birth. “The only consistent result I got was with the measure at conception,” Cameron says. “Condition at conception was strongly linked to the birth of a male or female foal.”

With this in mind, she took a closer look at the other studies she had reviewed. Of those that correlated sex ratios with the mothers’ condition at the time of conception, she found that three-fourths supported Trivers and Willard.

Humans show a similar pattern. Scientists have observed, for instance, that couples who have sex a few days before or after the woman ovulates tend to have boys, while those who have sex at or very near the point of ovulation tend to have girls. Some of the evidence for this comes from studies that looked at frequency of intercourse: Couples who have a lot of sex are more likely to conceive early in the woman’s cycle. One study looked at births in Australia from 1908 to 1967 among couples who conceived during the first month of their marriages, a time of frequent sex. These couples had 3 percent more boys than average. Similarly, in countries at war, sex ratios tilt toward boys, presumably because of frequent sex during home leaves and after demobilization.

How does this work? One theory holds that shifting hormone levels affect the viscosity of fluids in a woman’s reproductive tract, giving either the X-bearing sperm or the smaller Y-bearing ones an advantage in the race for the egg. When luteinizing hormone is released at ovulation, for example, it may somehow make the chase easier for the X sperm. Animal studies suggest the mother’s diet makes a difference. Dairy cows fed nutritious diets bear more bull calves than cows with poorer nutrition. Rat and mouse mothers on high-fat diets have more male offspring than those on high-carbohydrate diets.

After reviewing many such studies, Cameron suspects that high-fat diets make a difference by raising blood glucose levels. Glucose, she says, aids the survival of male embryos conceived in laboratory cultures. When glucose is added to the culture medium for cows and sheep embryos, a greater number of males survive. The same seems to be true for human embryos in vitro: Glucose enhances the growth and development of males but not of females.

Cameron also points to two studies of mice in diabetes research, where blood glucose levels are high. “In both cases, the offspring of the mice had a heavily male-biased sex ratio,” she says. Certain findings in humans could also be interpreted to support the importance of glucose in sex determination, Cameron says. Smoking lowers glucose levels, for example, and living in warmer climates raises them.

Cameron plans to do her own mouse study to see if she can skew the sex ratio of offspring by manipulating blood sugar levels. It’s not clear that glucose levels in the blood have a direct effect on glucose in the uterus. But if they do, and if the glucose hypothesis proves correct, scientists might one day exploit it. Manipulating human births would be ethically problematic, but livestock and lab animals would be natural targets. “In dairy cows, for example, you would like to get more female calves,” says Cheryl Rosenfeld, a veterinarian and biomedical researcher at the University of Missouri at Columbia. “In beef cattle, on the other hand, breeders would like to increase the ratio of male calves.” In laboratories, medical researchers would like to manipulate the sex ratios of rats and mice to make it easier to conduct studies that focus on a specific sex.

When it comes to people, could diet somehow work in tandem with the timing of intercourse to influence gender? Perhaps, Cameron and others say. Both are tied to hormone levels and thus affect conditions inside the uterus. As for all those diet strategies (eat meat for a boy, vegetables for a girl), Cameron says she wouldn’t be entirely surprised if they affected conditions in the uterus enough to make a difference: “We can’t know if they are hogwash until we understand how this really works.”