The Biology of . . . Perfect Pitch

Can your child learn some of Mozart's magic?

The psychology annex building at the University of California at San Diego has no elevator, but it has something even better: a singing stairwell. "It's a low F, I think," Diana Deutsch says, pausing on the top step to listen to the wind's howl. Deutsch has a face as round and sprightly as a sixteenth note, a red bob of hair, and a doctorate in psychology. She also has perfect pitch. "I realized I had it when I began taking piano lessons at the age of 4," she says. "It was a great surprise to me that other people could not name notes. It was as if everyone around me was unable to name colors." 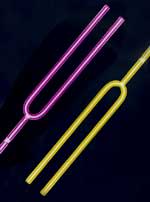 Composers such as Chopin, Bach, Handel, Beethoven, and Mozart, and performers such as Heifetz, Horowitz, Segovia, and Rubinstein have all had perfect pitch. But only one in 10,000 Americans shares their gift. Photographs by Monica Bradley