The Best Brain Model Yet

Scientists grow a 3-D "brain" on a sponge-like scaffold. 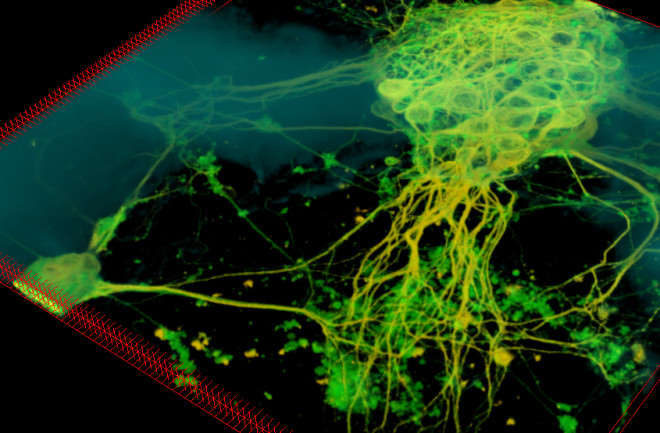 The doughnut sustains neurons (above) for months, longer than any other brain model. | David Kaplan/Tufts University

David Kaplan and his team built their model by constructing a collagen gel-filled protein ring that cultures rat neurons. Unlike older, simpler models, this one’s compartmentalized architecture (indicated by the multicolored rings) simulates the regions of the brain, and the chemically neutral protein allows neurons to connect realistically.

After growing the model for two months — previous ones lasted a few weeks at best — the team dropped different weights on the system to simulate brain trauma, like a concussion. Amazingly, all measured responses mimicked a human brain, making it the most realistic, responsive 3-D human brain model to date. And its longevity will allow researchers to introduce diseased cells to the model to better understand how brain diseases play out over time.

Although it’s impressive, the model has limitations. It absorbs oxygen and nutrients through cell membranes, not blood vessels, shortening its life span. Researchers want to integrate a humanlike vascular component to “feed” the model and extend its already superior life span.