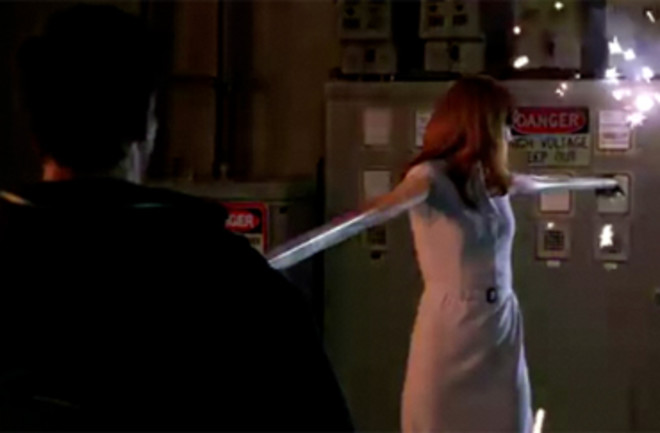 Friday night's episode of Terminator: The Sarah Connor Chroniclesdelivered the goods—a twisty episode, crammed with action, plot, and emotion, all leading up to a terrific set up for the third season (if there is one, and I really hope there is). The series has long-featured a T-1001 model terminator with unknown motives. For those of you not up on your terminator model numbers, the T-888 models features your classic Arnie-style metal endoskeltons wrapped in human flesh, while the T-1000's are made from 'liquid metal' of the sort featured in Terminator 2: Judgment Day. These terminators can form themselves into pretty much any shape they like, and real world researchers are already trying to develop materials with similar properties. These research efforts generally come under the heading of smart materials. One approach is create a single material which can be controlled—for example electrorheostatic materials are normally liquids, but become more viscous or solid when an electric field is applied to them, or shape memory alloys can be set into a particular pattern and then deformed. If the alloy is later heated, it will return to its 'programmed' original pattern. Another approach is to create an object out of a collection of tiny robot like entities, sort of like intelligent Lego bricks. These efforts tend to fall under the rubric of programmable matter (programmable matter is an umbrella term for a number of futuristic technologies, including the ability to create psuedo-atoms on demand). Carnegie Mellon has a "claytronics" projects with a spiffy speculative[1] demo that looks like it could be right out of the Terminator backstory. (Seriously. I half expected Sarah Connor to kick down the conference room door screaming "Death to Skynet!") MIT has projects along the same lines at it's Distributed Robotics Lab, and there are other groups around the country working on ways that allow collections of small, relatively dumb and ineffectual sub-robots to come together to make large, resilient and very effective composite robots—just like a certain Scottish-accented terminator we know. [1] i.e. not real -- yet.