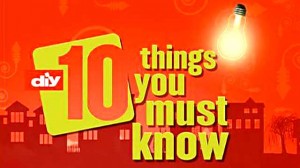 Lately I’ve noticed lots of articles with titles that are variations of “Ten Things You Should Know About X.” I became so convinced this was not just a figment of my paranoid imagination that I did a search for "10 things" OR "ten things" in Google News (with quotes) and was immediately rewarded with more than 676 hits. This is impressive, since Google News searches over a limited time horizon. The top hits Du Nanosecond were: “Mitt Romney's the frontrunner: 10 things the first big Republican debate showed”, “10 Things Not to Do When Going Back on Gold”, “10 Things We Learned at UFC 131”, “Top 10 things to do in your backyard”, “Steve Jobs: ten things you didn't know about the Apple founder”, and my personal favorite, “Ten things you need to know today”. What accounts for this ten-centrism? My first thought is an old joke. You’ve probably heard it: There are ten 10 kinds of people, those who get binary numbers, and those who don’t. Part of what I like about this joke is that it captures a bit of the arbitrariness of our penchant for counting in tens rather than twos. There is, on the other hand, the non-arbitrariness of how many bony appendages jut out of our pentadactyl palms. But, a list of the “Two things you need to know today” doesn’t seem to do justice to the complexity of modern life. So herewith is my list of the Ten Reasons We Are Seeing An Excess of Lists of Ten Things We Should Know: 1. We don’t have time to read anymore. Knowing we are going to get just ten things to process is comforting in its promise not to drain our attention from facebook and twitter. 2. Ten is close to the approximate size of our working memory. The size of our working memory, the amount of stuff we can recall from lists of things to which we’ve been recently exposed, is about seven (at least for numbers). I seem to recall there being a “plus or minus 2” factor here, in which case the upper limit for most of us mortals is nine items. 3. Since writers can’t make a living any more, we are sliding into an era of bullet point-ism. Anyone who has had a teacher who cares about writing has been warned by this teacher that making lists of bullet points in our essays is no substitute for actual writing in which thoughts are carefully connected to one another with transition sentences. This takes far too much time to work in any feasible business model for writers today (I’m trying not to use the word “nowadays” because the very same teacher who warned me not to write in bullet points also told me that this word was to be avoided). For one thing, they have to compete with bloggers like me who write for basically nothing. Ergo, the era of the articles of “ten things you should know,” which are typically not much more than bullet points. 4. In many cases, there’s more than ten things that you should know, or fewer than ten things that you should know. But, like “decades,” “centuries,” and other arbitrary anchors in the otherwise continuous flux of events and time, the writer doesn’t have to justify ten, because that’s what every other writer is chunking things we should know into. 5. It’s a way for pentadactyl animals to feel superior to unidactyl animals. No doubt if the planet were run by one-fingered/toed creatures, we would live in a George-Bush-like world of black and white. Downside: it takes longer to read “Top Ten” lists than “Top Two" lists. Over evolutionary timescales, this problem could result in unidactylism eventually reigning supreme. 6. At this point in the list, with four more to go, we enter the fat and boring midsection of the list of top ten things you should know about lists of ten things. It’s basically not remembered, so there’s really no point in putting anything here. Ditto for 7, and 8. 9. Because of the well documented recency effect, it’s time to start having content in our list of ten things again. I recall reading an apropos adage in a publication like Business Week that was like a pina colada to my information overloaded brain: “the value added is the information removed.” When it comes to digits, it seems that “the functionality added is the digits removed” – at least if our evolutionary history is any kind of guide. Our Devonian (350 million years ago) ancestors had 6-8 digits. In going down to five, and therefore lists of ten points, we’ve gone from fairly low achieving vertebrates to the spectacular successes of most subsequent animals by reducing our digits to what’s really needed. 10. If we’ve maintained our concentration to this point in the list, we will be rewarded with a bit of humorous fluff that helps bind some of our anxiety about the essential meaninglessness of our lives, and --- especially --- our time spent on reading yet another list of ten things we should know. Image: Logo of a home and garden show in Australia. Correction: "didactylism" in #5 changed to unidactylism - thanks to @Matt for pointing out the miscount!