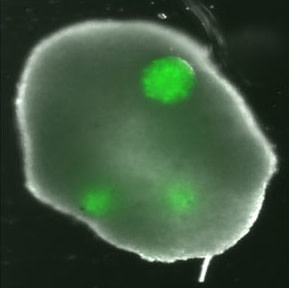 The engineered ovary after 48 hours.

For many cancer patients, treatment can be a double-edged sword. While recent advances in chemotherapy, radiation therapy, and surgery have brought relief to millions of sufferers, a significant fraction have had to sacrifice their ability to have children in return. Going under the knife or being bombarded by high-energy rays—though often critical for therapy—can sometimes irreparably damage a woman's eggs or man's testes, robbing them of their fertility. To say that this leaves young patients pondering therapy with an unenviable set of choices would be something of an understatement. Fortunately, thanks to some groundbreaking work by researchers from Brown University, female patients may soon never have to make this most difficult of decisions. A team led by Sandra Carson, a professor of obstetrics and gynecology, has built the first synthetic human ovary

from scratch by cobbling together the three cell lines involved in egg development—the theca cells, granulosa cells, and egg cells themselves—into a fully three-dimensional honeycomb-shaped structure. The hope is that the artificial ovaries could eventually be harnessed to nurture and grow immature eggs removed from patients about to undergo therapy. (For lengthier procedures, the extracted eggs could even be cryopreserved

before being placed into the lab-grown organs.) Once the treatment is over, the mature eggs, or ova, would be reinserted into the patients' ovaries or, if these have sustained too much damage, fertilized in vitro and implanted into the uterus. 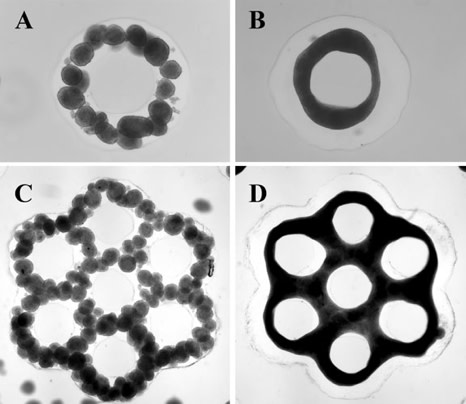 , was developed by Carson's colleague, bioengineer Jeffrey Morgan. As the name implies, 3-D Petri dishes do a lot more than simply provide a comfortable medium for the cells to grow: they also direct them to assemble into specific 3-D shapes that can be combined with other cell clusters, Lego block-style, to construct larger "microtissues." With it, the researchers coaxed the theca cells to form tiny honeycomb structures that they then filled with clumps of granulosa cells and egg cells. Like a normal ovary, the theca cells closed around the eggs and granulosa cells a few days later. And, like its human counterpart, the artificial ovary successfully fostered the eggs' growth to maturation. In addition to helping keep the patients' child-bearing dreams alive, these artificial organs could offer scientists an unprecedented look at how the natural ovary develops and how various problems, including exposure to chemicals and radiation, can inhibit or even shut down egg development. The research could also help oncologists design better treatments that are just as effective, or even more so, but much less risky for the patients (and future children).