Synesthesia Mask Lets You Wake Up and Smell the Colors 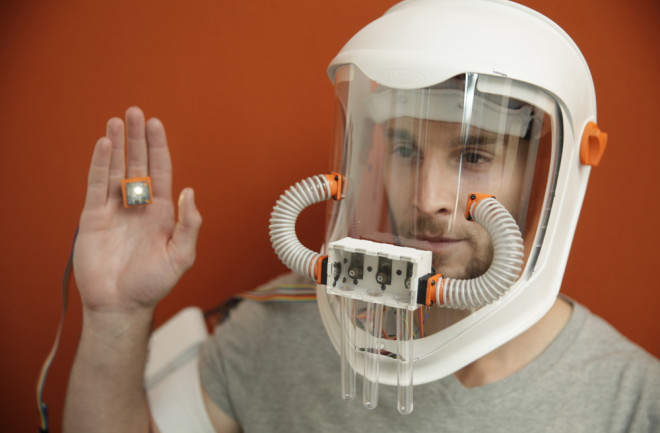 Zachary Howard wearing his synesthesia mask. (Credit: Instructables) What does a Picasso painting smell like? For individuals with synesthesia, catching the odor of, say, plum, while scrutinizing a painting from Picasso's blue period is just part of experiencing the world. A small percentage of the population are synesthetes, or people who interpret sensual stimuli with more than one sense — smelling colors, or tasting sounds for example. While very few people have access to this unique perspective on the world, there is now a way for the rest of us to get a taste, or whiff, of what synesthesia is like.

Zachary Howard, an aerospace engineer completing a fellowship at Autodesk, created a mask that mimics the effects of synesthesia using a color sensor, microprocessor and essential oils. By linking a sensor worn on the finger to an Intel Edison chip on the armband, Howard's device breaks any object's color scheme down into the three primary colors that correspond to three scent reservoirs. This information is transmitted to a system of fans and servo motors that controls how much of each of each scent to release. The smells flow up to the mask, and the wearer gets a constantly-changing odor portfolio that represents the colors of the world around them. In Howard's version of the mask, he chose to use lavender for blue, grapefruit for red and pine for green, but every user could theoretically choose any combination of smells they want. Speaking to Popular Science, Howard said that his combination of scents was particularly unsettling when representing gray. Most of the materials for his mask can be bought at the hardware store and assembled with some basic circuit building and programming knowledge. He provides detailed instructions for assembly over at Instructables. [embed]https://www.youtube.com/watch?v=9vLSuLL9xLA[/embed]

While there is no definite explanation for synesthesia, scientists think that it may be caused by communication between regions of the brain that control different senses.When one region of a person’s brain talks with another region that is wired to perceive a certain sense, the pathways cross and allow the person to experience “crossed senses.” Synesthesia is different for everyone who has it— some people claim they can smell a sound, while others hear a color, and some can even “taste” words. In one of the most common forms synesthesia, individuals perceive letters as having colors associated with them, turning sentences into a rainbow.

Colors Can Smell Any Way You Want

Beyond the novelty of Howard's mask, opening up various aspects of the world to different senses could allow artists to create in different ways. Many artists were rumored to have synesthesia, including Vincent Van Gogh and Duke Ellington, and today Pharell has spoken openly it. One artist with synesthesia has even painted her interpretations of famous songs, adding a visual complement to aural stimuli. Now, with a little technological help, we can stretch our senses in new directions, as well.