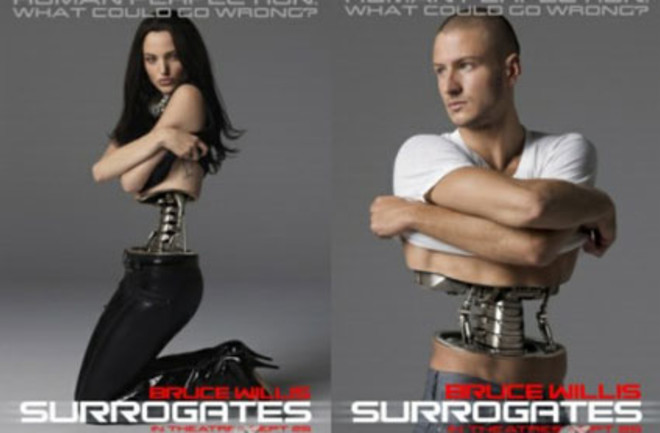 The world of Surrogates, people venture forth into the world via sleek and sexy avatars from the comfort of elaborate wireless hookups in their bedrooms. Life…Only Better goes the technology tagline. In theory, the scene won’t take place for another half century - unless you’re watching the film in Los Angeles, in which case it all looks strikingly familiar. Surrogates – which opens today – stars Bruce Willis as a police detective trying to track down the killer with a weapon that can disable avatars while simultaneously killing their users. While his avatar is younger, stronger and has a full head of hair, back home, he’s lost the connection with his wife, who only interacts as an avatar. The cautionary tale looks at a technology that’s meant to give mobility and a new lease on life to the wheelchair-bound or hideously disfigured and has been usurped by a pleasure-seeking populace. Think Second Life on acid. It’s easier to shell-out money for an avatar than a gym membership. The Touchstone Pictures production is based on the Top Shelf graphic novel from writer Robert Venditti and artist Brett Weldele. In fact, Venditti was inspired by the emerging obsession with plastic surgery and nascent experiments with mind-controlled computers as inspiration. What’s creepy is how plausible the conceit is given the mushrooming of cosmetic procedures, reality television and pervasive societal shallowness. In the interests of streamlining, the film loses some of the nuance and humor of the graphic novel, though the special effects team does a wonderful job of re-imagining actors with the youthful Plasticine look of avatars. And it’ll probably make you think twice about scheduling that next Botox appointment. — Science Not Fiction guest-blogger Susan Karlin