A new study claims that Functional Connectivity in MRI Is Driven by Spontaneous BOLD Events The researchers, Thomas Allan and colleagues from the University of Nottingham (one of the birthplaces of MRI), say that their results challenge the assumption that correlations in neural activity between 'networks' of brain regions reflect slow, steady low frequency oscillations within those networks. Instead, they report that the network connectivity is the result of occasional 'spikes' of coordinated activation that last only a short time. The authors fMRI scanned 12 volunteers using powerful 7 Tesla MRI. The scan sessions lasted 11 minutes and included resting periods along with simple motor and a memory tasks. After cleaning the data, they first used the method of ICA to identify networks of areas that tended to be activated together - such as the well-known motor network and the default mode network (DMN). Allan et al. then used an approach called paradigm-free mapping (PFM), which was developed in Nottingham by their own team a few years ago. PFM identifies 'events', points in time when brain activity changes as if some stimulus had been applied. At the network level, this revealed spontaneous 'spikes' representing times when the voxels within each network were co-activated: 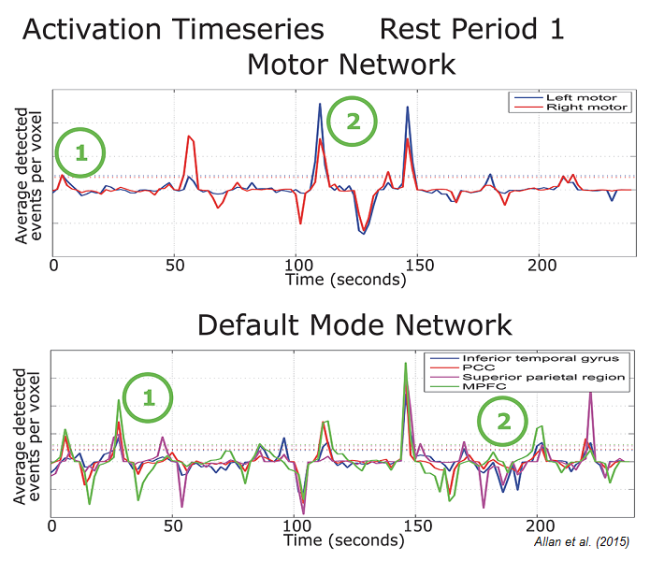 When Allan et al. looked at the spike-free time periods, they found only weak evidence for functional connectivity within these networks, suggesting that much of the connectivity that neuroscientists have long been studying can be understood as a product of spontaneous events, rather than slow oscillations:

Possibly all the connectivity could be attributed to events if we assume that some events went undetected by the PFM method. It's a fascinating idea, although as the authors note, it's not wholly new:

"Our results are similar to those from other studies [35, 36] that also showed short periods of high correlation".

However, Allan et al. say that their approach is more robust against the problem of head movement and other artifacts, compared to previous studies. However, while the 'events' are very clear on the image I've shown above, this is not a graph of the actual fMRI signal, but rather it represents the proportion of voxels within a region that were classed as 'activated' by the PFM algorithm. Allan et al. show the mean signal time-series corresponding to these graphs in a Supplementary Figure and here, it's hard to make out discrete 'events', in my opinion: 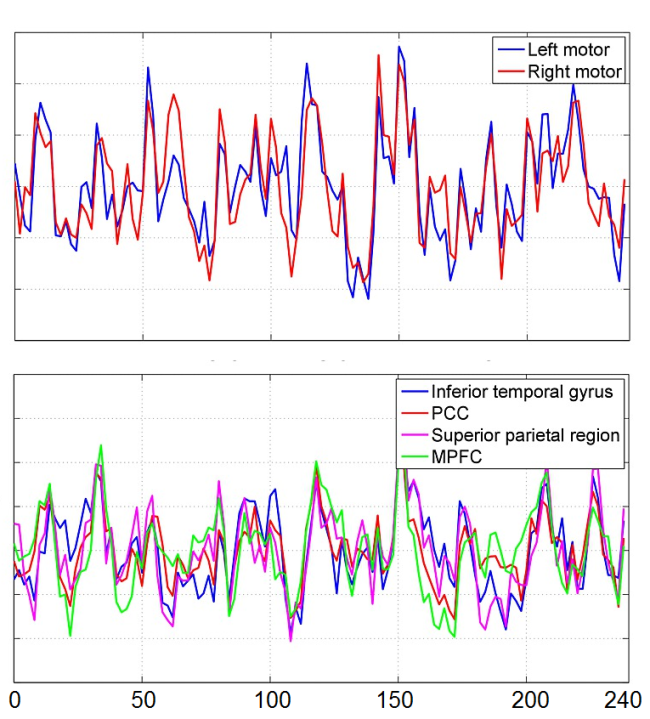 But the authors showed that the strength of connectivity in a network was significantly stronger in the presence of these events. The PFM therefore is picking up on some kind of nonstationarity in the brain's activity, even if it's not visible with the naked eye. What are these events, then, and what triggers them? Could they be the neural correlates of spontaneous thoughts? It's all very interesting. The only reason for caution in interpreting these results is that some of the events were not limited to particular networks but spanned the entire brain. One of these happened at time-point 150 on the graphs above. These global spikes, which Allan et al. admit are "unexpected", might be of non-neural origin, e.g. "sudden global increases in blood flow."