Seeking the Atom of Attention 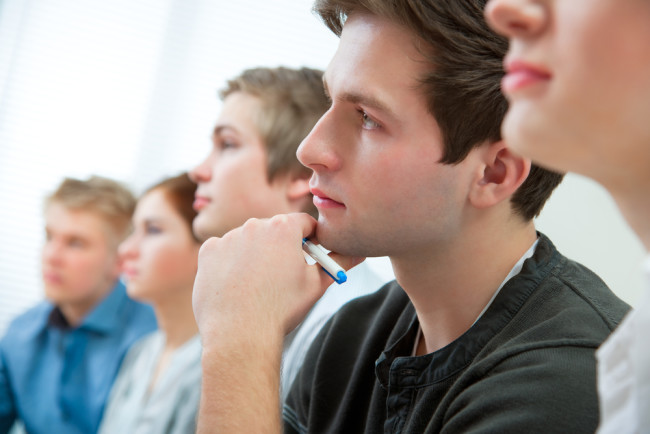 Imagine what it would be like to take in everything about this moment. Not only would you be aware of these words on the screen before you, but also of the location of nearby objects with centimeter precision, of the feeling of your toes in your shoes, of every creak, crack and squeak. You would be able to focus on thousands of memories at once, and track every one of your changing emotions no matter what else you were busy with. Needless to say, your mind would overload with all this information. So why are you still functioning? Because you have the ability to selectively process only a subset of the information-rich world at a time---that is, the ability to pay attention. Attention is the gatekeeper that "decides" what the mind processes and what it ignores. Yet we typically pay attention so naturally that we seldom pause to consider exactly how our minds accomplish this feat.

One of the best starts toward understanding how something works is to determine the underlying unit withwhich it operates. By discovering the atom, for instance, scientists learned that the number of atomic protons distinguishes the chemical elements, and that the number of atomic electrons influences their magnetic properties. For decades, cognitive scientists studying attention have asked a similar question: what is the unit of attention? That is, what is it at the most fundamental level that attention latches onto in the surrounding world? Based on our intuitive experience, we might think that attention works something like a spotlight, illuminating everything in our field of view. This spotlight theory of attention is not only intuitive, but for a long time was the dominant theory in vision science. The theory holds that everything that falls within our attentional spotlight should be processed equally quickly---including all objects and their surrounding space. For instance, when paying attention to the shape of one particular cloud in a cloudy sky, you would process a neighboring cloud’s shape just as clearly as that of the one you’re focusing on, since both clouds would still fall within your field of view, or spotlight. However, a wealth of research from the field of visual perception has shown that this spotlight-based theory of attention is incorrect. As cognitive scientists have discovered, the mind processes information more quickly from objects you pay specific attention to. It does not process information equally quickly from all objects in your field of view, even though it often seems as though this is the case. So, you actually process the shape of the cloud you’re focused on more clearly than that of a neighboring cloud, even if you can see both of them in your field of view. This is essentially the object-based theory of attention. It says that attention latches onto structures.

The strongest evidence of object-based attention was demonstrated by a group of American and British psychologists. Participants in their 1994 experiment

were shown two side-by-side rectangles on a computer screen.The corner of one of the rectangles briefly flashed (called the cue), warning participants that another corner would soon flash again (called the target). Participants had a simple task: to hit the spacebar as soon as they saw the target. The trick was this: sometimes the target would occur on the same rectangle that had been cued, and sometimes it would occur on the neighboring rectangle. When the experimenters compared participants’ response times, they discovered that participants were quicker to respond to targets that occurred on the rectangle that had been cued, even though the distance between the cue and the target in both cases was exactly the same.If the mind treated all objects and space within our field of view equally, then attention would not have been slower to shift across the space between objects---but it was. The researchers named this phenomenon the “same-object advantage.”

, I teamed up with Yale psychologists Brandon Liverence

to ask, What is the unit of attention in time? Might attention work like a spotlight in time, processing different events equally quickly? Or does attention process information more quickly from “objects” in time? Although most of us aren’t used to speaking about objects in time, our minds are capable of delineating boundaries in time, such as between sentences. So, for instance, when speaking with friends, does your mind process information more quickly from within a single sentence rather than across two sentences? One type of object in time is a rhythmic pattern. Rhythm is integral to our ability to engage in speech or to synchronize our movements with others, among other things. And just as a simple rectangular object has a rectangular boundary, a simple repeating rhythm has boundaries where one unit of a rhythm ends and the next begins. It is this repeating structure that we latch on to, for instance, when we tap along to the beat.

In our experiment, participants listened to simple, repeating rhythms. A given rhythmic object was simply a pattern of long and short notes of the same pitch---e.g. da da da daaa, da daaa---and each repetition of this pattern constituted a separate object. As in the rectangles experiment, participants would occasionally hear a higher pitch (the cue) followed shortly by a second higher pitch (the target). Their task was to hit the spacebar as soon as they heard the target.The cue and target could occur either together within one rhythmic unit, or in adjacent rhythmic units. Fascinatingly, we found that participants were quicker to respond to targets that occurred in the same rhythmic object as the cue---even though an identical amount of time elapsed between cue and target in both cases. In time, as in space, there appears to be a same-object advantage. Furthermore, this same-object advantage occurred even when the rhythm was conveyed not auditorily, but visually:by a bar on a central pivot that seesawed up and down to mark each new beat of the rhythm.In this visual version, the cues and targets were brighter flashes of the bar. Once again, participants were quicker to respond to targets that occurred in the same rhythmic object in which the cue had occurred.

A New Unit of Attention

Collectively, these findings suggest that the general unit of attention---not only in space, but also in time, and in both vision and audition---is the object. Even though we may not be aware that it is happening, our minds are constantly processing information more quickly from objects we pay specific attention to than from adjacent objects. So the next time you're at an orchestral performance and feel like you're taking in everything continuously, remember that beneath the hood your mind is actually tackling the music in bite-size chunks. But of course, the mystery remains how (and why!) we nonetheless perceive the world as fundamentally continuous. Julian De Freitas is a graduate student in experimental psychology at Oxford.Image by Alexander Raths / Shutterstock