Scientists See the Foreshadowing of Depression in Brain Anatomy 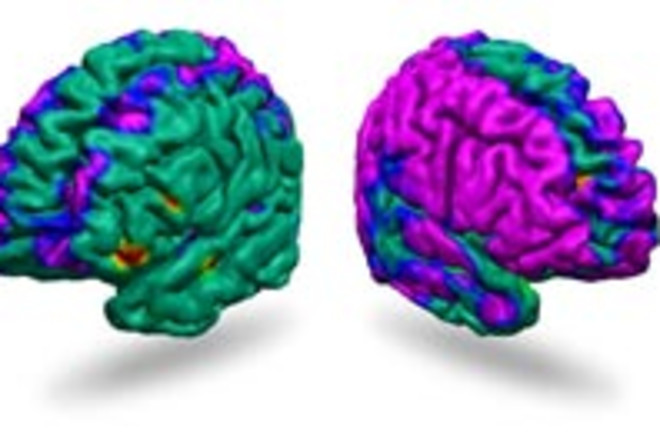 People with a family history of depression have an altered brain anatomy, a new study says, even if they themselves have never experienced clinical depression.

Brain scans showed a 28-percent thinning in the right cortex -- the outer layer of the brain -- in people who had a family history of depression compared with people who did not. "The difference was so great that at first we almost didn't believe it. But we checked and re-checked all of our data, and we looked for all possible alternative explanations, and still the difference was there" [Reuters],

said study coauthor Bradley Peterson. Researchers scanned the brains of 131 individuals ranging in age from 6 to 54, about half of whom came from families with a history of depression. The

team was looking specifically for abnormalities in the brain that could signal a predisposition to depression, rather than changes that may be caused by the disease [Reuters].

The cortical thinning seems to fit the definition as a warning flag. Says Peterson:

“That’s what is so extraordinary. You’re seeing it two generations later, and you’re seeing it in both children and adults.... And it’s present even if those offspring themselves have not yet become ill” [The New York Times].

The cerebral cortex is largely responsible for reasoning, planning, and mood, and researchers suggest that its thinning may interfere with a person's ability to interpret social and emotional cues from others. Interestingly, not all of the subjects with depressed family members showed thinning on both sides of their cortices; it was primarily those with thinning in the left hemisphere who had actually developed depression. The study, to be published in an upcoming issue of Proceedings of the National Academy of Sciences, does not prove that depression is determined by genetics, Peterson stresses.

“We don’t know if this has a genetic origin or if it’s a consequence of growing up with parents or grandparents who are ill. Studies have shown that when parents are depressed, it changes the environment in which children are growing up” [The New York Times].

But the research does suggest

some ways in which mental health clinicians might intervene early to head off the development of depression in those at highest risk. For those with early signs of cortical thinning, psychotherapy, coaching, skills training and even medications used to treat symptoms of ADHD might prevent further deterioration of brain tissue and block the development of depression, Peterson said [Los Angeles Times blog].

Related Content: 80beats: Viagra Helps Women Combat the Sexual Side Effects of Antidepressants DISCOVER: Are Antidepressant Drugs Actually Worth Taking? DISCOVER: Is Dirt the New Prozac? DISCOVER: Shiny Happy People looks at happiness classes and the field of "positive psychology" DISCOVER: Wired for Emotion follows the effort to understand the root cause of depression Image: Bradley S. Peterson/Columbia University. The purple regions are the thinnest.