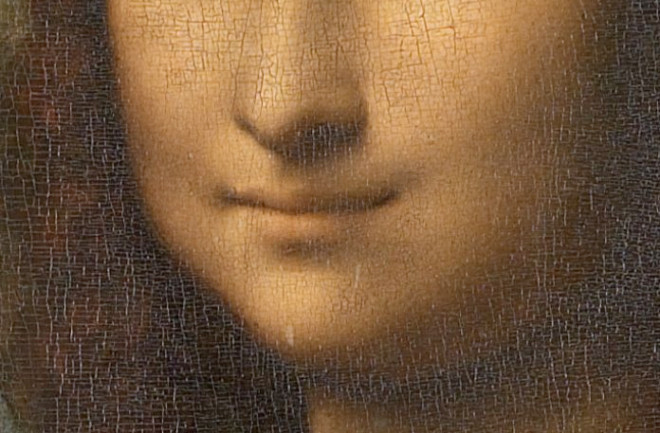 Researchers have unraveled the mystery of the Mona Lisa’s enigmatic smile, with help from another Leonardo da Vinci painting that uses the same clever technique.

The Mona Lisa has captivated people for centuries because her smile is so elusive; from one angle, she seems to be smiling, but when you look directly at her lips, her smile appears to flatten. It’s really a clever visual trick, in which subtle blending of colors exploits our peripheral vision.

And now it appears da Vinci had used the trick before. A recently discovered earlier da Vinci portrait, “La Bella Principessa,” uses the same visual effect to create the impression of an elusive smile.

The girl in the portrait is Bianca, the illegitimate daughter of Ludovico Sforza, who ruled Milan during the 1490s. Her father commissioned the painting in 1496, in honor of Bianca’s upcoming wedding to a commander of the Milanese army. She was 13 years old.

Bianca’s portrait conveys all the tension and complexity of her situation. When viewed from a distance, Bianca seems to be smiling. But up close, her mouth seems to tilt downward, giving her a grim, melancholy look. And like the Mona Lisa, Bianca’s smile appears more readily in viewers’ peripheral vision, and fades when viewers look directly at her lips.

“As the smile disappears as soon as the viewer tries to ‘catch it’, we have named this visual illusion the ‘uncatchable smile,’” researchers Alessandro Soranzo and Michelle Newberry of Sheffield Hallam University wrote in a paper published in the journal Vision Research.

To find out how da Vinci’s subtle illusions worked, Soranzo and Newberry set up a series of experiments in which people either viewed the portraits from a distance or saw blurred versions to simulate peripheral vision. (We see things in the center of our field of vision more sharply than we see things on the edges.)

People agreed that the Mona Lisa and “La Bella Principessa” appeared more content, on a numerical scale from one to seven, from a distance than when viewed up close, but distance didn’t make a difference for “Portrait of a Girl,” painted in 1470 by Piero del Pollaiuolo, who didn’t use da Vinci’s visual illusion. Digitally blurred copies of the images created the same effect as distance.

Next, to test how precisely this ambiguity was achieved, researchers showed subjects copies of the paintings with black rectangles over the subjects’ eyes, mouth, or both.

With the mouths covered, the ambiguity vanished. That indicated that the subjects’ shifting expressions were originating from their mouths.

"Virgin of the Rocks," by da Vinci.

“Virgin of the Rocks,” by da Vinci.

The portraits’ mouths seem to change their slant thanks to a technique called sfumato, which blends colors and shades to produce soft, gradual transitions between shapes, without any clear outlines. In both the Mona Lisa and “La Bella Principessa,” da Vinci used sfumato to soften the outlines of the mouth, so there’s no clear line between the lips and the rest of the face.

When a viewer focuses on the subject’s eyes, the sfumato technique creates the illusion of the lips slanting upward. But when you look at her lips themselves, they seem somewhat pursed.

That’s why the Mona Lisa seems to smile more when you’re not looking at her mouth.

Soranzo told Discover, “Given da Vinci’s mastery of the technique, and its subsequent use in the Mona Lisa, it is quite conceivable that the ambiguity of the effect was intentional.” And da Vinci may have experimented with the technique even earlier, in his 1483 work “Virgin of the Rocks,” although that hasn’t been proven yet.

“Many of Leonardo’s followers used a similar technique, but without they haven’t been able to achieve the same result,” said Soranzo. Soranzo next intends to analyze da Vinci’s work in comparison to his followers’ in order to better understand the secrets of that subtle smile.