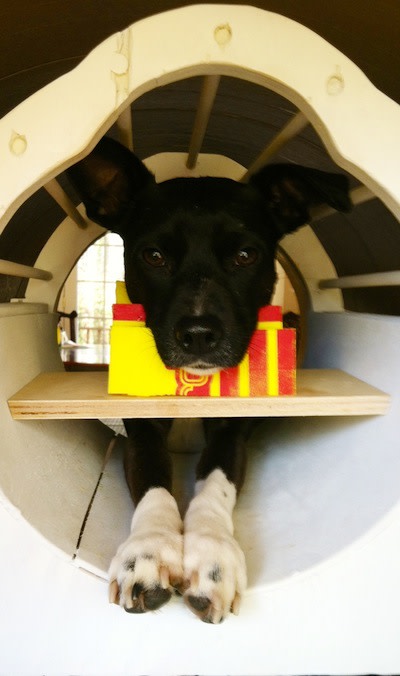 We've learned a lot about how the brain works from functional magnetic resonance images. I should clarify: we've learned a lot about the human brain. Thousands of people have volunteered to lie down inside fMRI scanners and have the activity in their brains monitored as they perform different kinds of mental tasks, or even just do nothing at all. We must resist the temptation to look at the pretty fMRI images and think they're just photographs of the mind. They're actually more like very complex, statistically worked-over graphs. But even with those caveats, there's a lot to learn from them. But fMRI only works if you hold very, very still. Having been scanned myself for a story a few years back, I can vouch that this experience takes a lot of patience, and a high tolerance for loud buzzing noises and for narrow, confined spaces. Scientists have managed to take fMRI scans of monkeys and rats, but they've either been knocked out cold, or restrained so the images of their brains don't blur. If you can persuade a gorilla to lie peacefully in the bore of a scanner for half an hour and look at pictures of bananas, do let us know. All of which is to say that it's delightful to read a paper just published today in PLoS One in which Emory University scientists report the first successful fMRI scan of unrestrained dogs. The dogs they studied were a border collie named McKenzie and a mutt named Callie. The scientists trained the dogs to jump into the fMRI bore and set their chin on a rest, so that they were staring out the open end. A human handler, standing outside the bore, then made a hand signal. If the left hand was raised, that meant the dogs would get a hot dog after the session. If both hands pointed to each other, that meant no treat. Regardless of the signal, the dogs had to stay motionless in the bore for ten seconds. The hanlder would then give the dog a treat if one had been indicated. 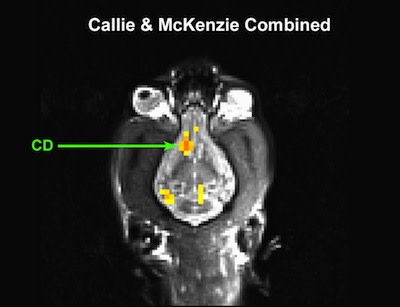 It turned out that the dogs kept their heads still enough that the scientists could line up scans of different trials. And that meant that they could do some comparisons of the activity inside the dogs' brains when the handler indicated a hot dog was on the way and when the handler indicated it wasn't. A huge amount of research on humans and lab animals has pointed to one region in particular as being important for perceiving these kinds of rewards, known as the ventral striatum. It releases the neurotransmitter dopamine, which heightens attention throughout the brain. So the scientists focused their attention on the ventral striatum of the dogs. Of course, dog brains are shaped differently than human brains, so finding it took some work. But once they did, they found a satisfying pattern: when the handler made the hot dog sign, the ventral striatum showed higher levels of activity. (In this picture it's marked CD, standing for the caudate cluster, in which the ventral striatum is located.) When the handler made the no-hot-dog sign, on the other hand, the ventral striatum remained quiet. Interestingly, McKenzie the border collie had a much stronger response than Callie. That may be no coincidence, because McKenzie has had lots of agility training in her life. The pathways for learning rewards and responding to them--particularly from humans--may be stronger in her brain. Which raises an important question: what's the nature of the reward in a dog's brain? Is it the prospect of the hot dog alone that triggers the response, or does pleasing a human by doing a drill correctly play a part? As I wrote in this Time story in 2009, a new field called canine cognition is taking shape to address these questions. Until now, canine cognition studies have been limited to basic psychological experiments, such as seeing how well dogs can make sense of a pointed hand. Now we can start to see what's happening inside the canine brain during some of those experiments as well.