A few weeks ago I alluded to the controversy around proposition 37. This was the GMO labeling law proposal. Many life scientists in California opposed this law. One aspect of this issue is that it is an area where the Left may be stated to be "anti-science." This is why this was highlighted in Science Left Behind. But there's a problem with this narrative: the survey data for it is weak. There are broad suggestive patterns...but the reality is that the strongest predictor of skepticism of genetically modified organisms is lower socioeconomic status. The GSS has a variable, EATGM. Here are the results by ideology:

I would caution that the sample size is small. But, if you dig deeper into the survey data you can find evidence that conservatives are more unalloyed in their support of biotech.

And yet with all this said, today I noticed that the California proposition 37 results are rather stark in their geographic distribution. The measure failed statewide, but 2/3 of the people in San Francisco and Santa Cruz counties supported it, as did 60% of the people in Marin (interestingly, only a little over 50% supported it in San Mateo and Santa Clara). I couldn't find a tabular list with the results by county, but there are interactive maps. If someone was industrious (and had more time than I do) they would go and collect the data from the maps, and do a loess of "support proposition 37" vs. "support Obama." 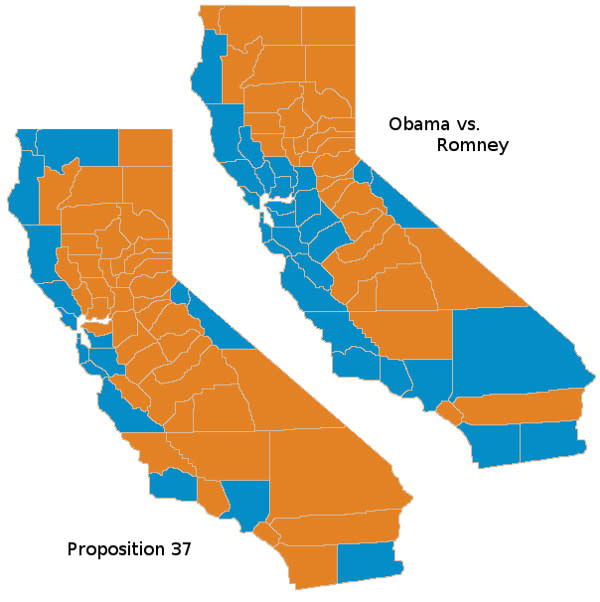 The main problem is that from what I can tell a lot of Left-liberals who support anti-GMO policies, explicit or implicit, do so because they believe that that is anti-corporate. My argument is that whatever issues one might have with agribusiness, one should litigate the question of scale in agriculture directly and forthrightly, rather than focus on sidelights like GMO.