There are now over 400 responses to the survey. Here is a link to the responses in CSV format. If you import this into R, an extra parameter in regards to encoding may be necessary: 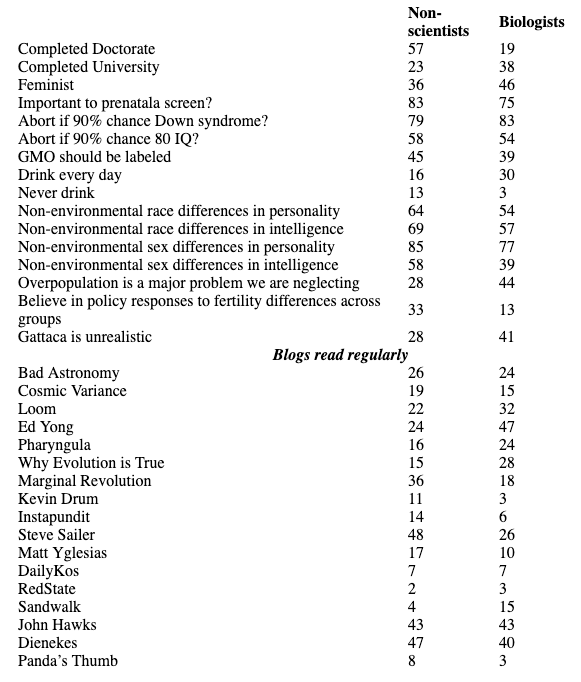 It makes sense that people who say they're biologists tend to be very well educated. One thing not evident explicitly in the table is that the biologists who read this weblog tend to be more conventionally Left-liberal in their views, and I think that explains some of the differences in response to questions such as feminism.  More interesting to me is that my non-scientist readers seem to exhibit a more strongly hereditarian viewpoint, or accept the predictive power of genetics to a greater extent, than the biologists! You can chalk some of this up to ideology, but when you look at the Gattaca question I think you are getting to the heart of a major issue: biologists, and geneticists in particular, understand the limitations of genetic inference. This does not mean that one accepts a "blank slate" perspective. On the contrary, almost all of my readers accept individual differences in intelligence and personality being genetically mediated (I omitted that result there was so much unanimity). But, there does need to be some subtly in how we interpret the interplay between genes and environment. As Jim Manzi would say, this is an area with "high causal density." The world of Gattaca is really more about social engineering than genetic engineering, and the former is much more difficult than the latter.

A minor admission of surprise, in a good way, is that it seems the overwhelming majority of my readers do accept non-environmental differences in personality between the sexes. Obviously someone who reads this weblog is not representative of the general population, but as you may know I have been moderately pessimistic about acknowledgement of non-reproductive biological differences of the sexes in the current intellectual/political climate (where in some quarters such acknowledgement is ipso facto admission of being sexist). These results update my assessment in this domain somewhat, though to be sure I stated the question in a very broad and general manner which would be difficult for many to disagree with.

Finally, it seems that biologists and non-scientists read blogs a fair amount, but their selection differs somewhat. In particular, biologists seem to be reading blogs by...well, biologists (e.g., Larry Moran, Jerry Coyne). Not too surprising. The main exception is Panda's Thumb. But the reality is that many biologists have only a marginal interest in the 'controversy' of evolution, so I don't think that this exception is very telling.