Our clumsy noses won't win any sniffing contests, but we can use them to find chocolate. 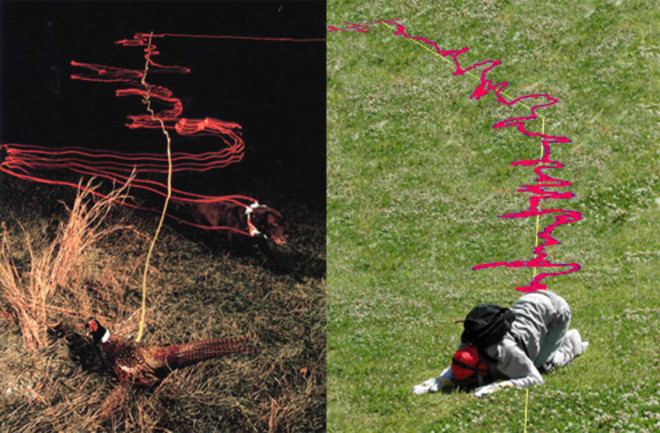 The zigzagging patterns of a dog and a human hot on the trail of a delicious scent show remarkable similarity.

THE STUDY  “Mechanisms of Scent-Tracking in Humans” by Jess Porter et al., published in the January 2007 issue of Nature Neuroscience.

THE MOTIVE In a sniffing contest between rats, dogs, and people, we would undoubtedly come in a distant third. Humans have a notoriously poor sense of smell. Of our 1,000 olfactory receptor genes, more than half have fallen into disuse, and the long snouts of our primate ancestors have regressed to stubby noses. It’s often assumed that our fine stereoscopic vision and intelligence compensate for our inability to detect a wide range of smells. A minority view holds that with proper training—as embraced by perfumers and wine tasters, for example—anyone can learn to detect a delicate bouquet. A team of neuroscientists at the University of California at Berkeley decided to run an experiment to see if humans could track scents by crawling along the ground like dogs. The answer: Not only can they do it, but they improve with practice, using both nostrils independently to sample separate airstreams.

THE METHODS  Jess Porter, a grad student in biophysics at Berkeley, designed the experiment with the aid of her adviser, neuroscientist Noam Sobel. “He’s been a proponent for a long time of using humans to study these fundamental questions about the sense of smell,” Porter explains. “A lot of people balk at the idea of using humans because you don’t have the ability to manipulate their genome or record from their neurons directly. But we can exploit the fact that we can communicate with people and ask them to do really bizarre things exactly how we want them to do it.”

Thirty-two Berkeley undergraduates—16 men and 16 women—volunteered to don eye masks (to block vision), earmuffs (to muffle sound), and thick kneepads, elbow pads, and work gloves (to reduce their sense of touch), leaving only their noses open to sensory cues. Then Porter and Sobel asked the subjects to crouch on their hands and knees and sniff their way along a scent trail—a 33-foot twine line soaked in a chocolate solution and tacked, with one 45-degree bend midway, across a grass meadow. “Most people were game to try it,” says Porter. “They just assumed, well, these are crazy scientists and this is another crazy thing they do.” Two-thirds of the subjects were able to follow the track to the end within 10 minutes, sniffing from side to side, noses close to the ground, in a zigzag path.

In a subsequent experiment, four subjects repeated the exercise three times a day for three days. These expert trackers learned to reach the end of the trail within three and a half minutes on average, aided by an increase in their sniffing rate. A pressure transducer, connected to the subjects’ nostrils by two thin plastic tubes and carried in a backpack, showed that sniffing frequency increased as subjects became more experienced.

Porter and Sobel also did a third experiment to see if humans could locate a scent by comparing the inputs of their two nostrils. (It is well known that mammals can pinpoint a noise by comparing sounds entering each ear, but nobody knew whether two closely spaced nostrils could do the same with smell.) When 14 subjects repeated the experiment with one nostril taped shut, they were considerably less likely to reach the end of the track—just over one-third could do it, as compared with two-thirds for the free-breathing testers—and they were 26 percent slower. Breathing through a “single virtual nostril”—a Teflon tube that forced both nostrils to draw from the same stream of air—also hurt performance. Apparently, stereo sniffing is important for detecting the source of an odor. “This is analogous, we think, to the fact that you can use your paired ears to localize sound in space, and you can use paired eyes to have depth perception,” Porter says.

THE MEANING We may have lost our sensitivity to a wide range of smells—the Berkeley students were still no match for a dog—but our nostril architecture and nerve pathways for detecting odors are perfectly functional and probably work better than previously thought. Porter and Sobel’s findings suggest that smell has played a more important role in human evolution than is commonly assumed, says Gordon Shepherd, a Yale University neurobiologist who studies human smell. A good sense of smell probably helped our ancestors find out which foods were edible after leaving Africa’s forests for the savanna.

“Four or five million years ago, when primates came down from the forests and out onto the plains, it was harder to find foodstuffs than by just swinging in a forest,” Shepherd says. “They had to make decisions about food that was ripe, that was palatable, and so forth.That’s when flavor was critical for making those decisions. And smell is the major component in the multisensory perception we call flavor.” While Porter points out that humans “don’t use their noses to find a bakery in the morning,” she also argues that “we’ve still retained an amazing ability to smell that can be revived with practice. That’s exciting.”