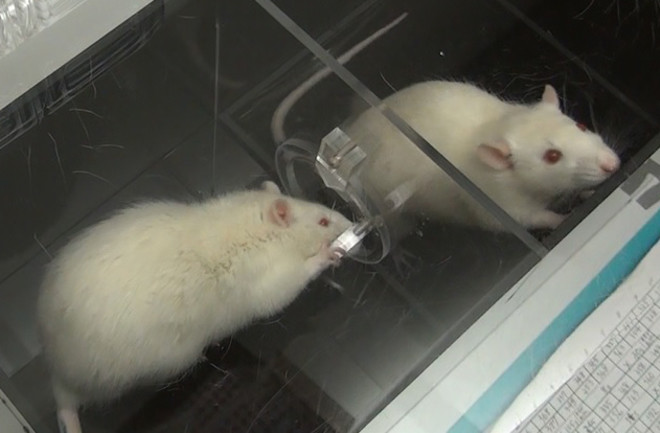 Somewhere along the way, “rat” became the operative term for a double-crossing, backstabbing person who betrays their friends. But in reality, rats — the cheese-loving kind — won’t hesitate to help a fellow rat in dire straits.

In a new study, researchers placed two rats in a cage divided in half by a wall with a small door. On one side of the wall, a rat sat high and dry. But on the other side, a second rat was soaked and left to sit in a pool of water; rats hate getting wet. When the dry rat noticed the distressed and drenched cage mate, the dry rat consistently opened the door to liberate the comrade. Researchers say their findings suggest that rats may experience empathy.

To test a rat’s empathetic behavior, scientists set up three scenarios in which a dry rat could liberate the soaked cage mate. In the first scenario, scientists placed a rat — we’ll call it the helper rat — in the dry area of the experimental box, and a soaked rat in the pool area. Nine out of 10 helper rats opened the door dividing the two spaces, allowing their distressed friend to escape the pool. You can see helper rats in action in a short video clip from the study.

Researchers also switched the rats’ roles to see how the pool experience affected their behavior. Interestingly, rats familiar with the pool’s discomfort bailed out their pals much sooner than rats that hadn’t yet experienced the pool.

Putting Empathy to the Test

Did helper rats open the escape door because they saw another rat, or could they sense their cage mate’s stress?

In the second scenario, researchers again put pairs of rats in the experimental box, but both were dry. This time, only one helper rat out of eight assisted their neighbor. Thus, researchers concluded, stress was necessary to generate helping behavior.

The final scenario put rats’ empathy to the ultimate test: Helper rats could choose to help their wet neighbor in one room — this time with a deeper pool — or enjoy a tasty treat placed in a second adjacent room. In test after test, rats chose to help their pals before nabbing the treat. In some instances, the helper rats even shared the treat with their soaked friend.

Researchers published the results of their study Tuesday in the journal Animal Cognition.

Researchers believe the rats’ behavior was an example of “emotional empathy,” or the ability to understand the thoughts, feelings and desires of another individual. Although researchers warn we should interpret these results carefully, rats, they say, could serve as models to gain deeper understanding of the neural processes that underlie social behavior.

So the next time your best friend does you a solid like helping you move, let them know they’re truly appreciated by giving them a high-five and calling them a “rat.”

More From Discover
Planet Earth
Humans Aren’t the Only Primates Who “Share for Sharing’s Sake”
Planet Earth
Sperm Whales Have the Biggest Brains, but How Smart Are They?
Mind
Who Were The Boskops And Were They Really Smarter Than Us?
The Sciences
We Still Use These 5 Native American Inventions Today
The Sciences
5 Hispanic Scientists That Made Amazing Contributions To Science
Technology
Taking a Closer Look at Forensic Science Behind U.S. Criminal Justice
Recommendations From Our Store
My Science ShopDiscover STEM Kits
My Science ShopDiscover 2022 Calendar
My Science ShopStrange Science
My Science ShopElements Flashcards
Shop Now
Stay Curious
Join
Our List