Rat Brains Wired to Communicate at a Distance 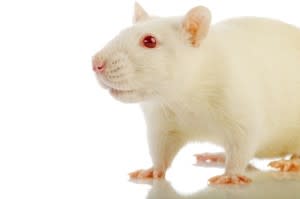 Can rats read minds? Perhaps not usually, but researchers at Duke University have developed what they call a brain-to-brain interface, which transfers information directly from one rat's brain to another. The interface allows the decisions of a rat on one continent to control the behaviors of a rat on another. To accomplish this, researchers in North Carolina implanted tiny electrodes into the brain of a rat to record its activity, and then trained the rat to distinguish between a wide chute and a narrow one by whisker feel. The rat had to correctly match the sensation (wide or narrow) with a corresponding hole (left or right) by poking it with its nose. When the rat correctly matched the width and hole, which it did 96 percent of the time, the rat was rewarded with a drink of water. Researchers called this rat the encoder. 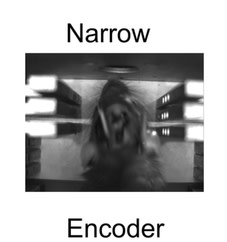 Image courtesy of Miguel Pais-Vieira et al. Then the researchers fitted a second rat with brain-stimulating electrodes. This rat was called the decoder. Researchers put it in a set-up similar to that of the encoder. They fed the encoders' brain activity through the electrodes to stimulate the decoder rats' brains. The decoder rat was still expected to stick its nose in the right hole, but it had no physical stimulation to guide it. Instead, it was entirely dependent on the signals sent to its brain from the encoder rat. When the decoder rat picked the right hole, which it managed about 62 percent of the time, both it and the encoder rat received a reward. That success rate was far higher than it would have been by chance alone. 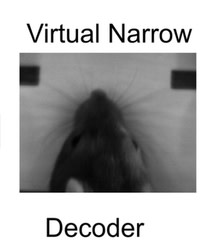 Image courtesy of Miguel Pais-Vieira et al. Then the researchers upped the ante. They recorded the brain activity of an encoder rat in North Carolina, sent it over the internet, and input it into a decoder rat in Brazil. The results were the same: 62 percent success, as reported in Scientific Reports today. The researchers say this is the first time a direct channel has exchanged behavioral information between the brains of two rats while completely bypassing their normal modes of communication. Being able to understand, control and eventually expand such communication networks could lead to organic computers in the future, capable of solving experience-based problems that go beyond the capability of normal computers.