Random Brain Waves Save Free Will?

A new paper adds to the perennial free will debate, by casting doubt on the famous Libet experiment. Back in 1983, neuroscientists led by Benjamin Libet found that, about two seconds before someone presses a button 'of their own free will', a negative electrical potential - dubbed the Readiness Potential (RP) - began to build up in the cortex. Their EEG study showed that the brain seemed to have 'decided' before the conscious mind did - bad news for free will. Since then, the meaning of the RP has been extensively debated. But the new study by Han-Gue Jo and colleagues of Freiburg makes a strong case that the "RP" is not really a 'thing' at all. They say that, in the two seconds before a button press, you see both negative and positive changes, in roughly equal numbers. There are slightly more negative ones, so on average, there is a small negative "RP", but only on average.

Almost half the button presses were not preceded by a negative potential, yet the button still got pressed - which means that the negative "RP" can't directly reflect the decision to press. Jo et al also ran a comparison condition, where participants had to listen to a beep, instead of pressing a button. So there was no 'free choice' to make, yet there were potential shifts in the two seconds before the beeps, just as there were before button presses. The difference was that in the beep task, there were equal numbers of positive and negative potentials, and they cancelled out to zero on average. Jo et al say that these shifts are more or less random, spontaneous background changes in the brain - nothing to do with 'readiness' or decisions. But why then are negative potentials more common just before movements? They suggest that

the negative deflections facilitate a movement in the near future, but they are not a neural sign of decision processes to move.

In other words, they don't reflect a choice being made, rather they contribute to making a choice. Random brain changes influencing our choices... is that good news for free will? Anyway, Jo et al did find a more substantial negative RP preceding button presses - albeit only about half a second beforehand. This occurred whether or not the ongoing slow wave was positive or negative: 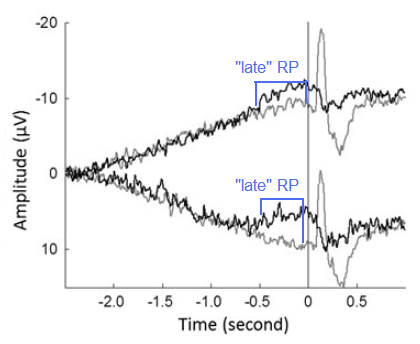 Could this -0.5 second 'late RP' be the real marker of the decision to move? If so, it would still precede the moment of the conscious decision, which on average occurred at -0.25 seconds before the button got pushed.