Psychiatry: End of the Road for "Endophenotypes"?

An important new study could undermine the concept of 'endophenotypes' - and thus derail one of the most promising lines of research in neuroscience and psychiatry. The findings are out now in Psychophysiology. Unusually, an entire special issue of the journal is devoted to presenting the various results of the study, along with commentary, but here's the summary paper: Knowns and unknowns for psychophysiological endophenotypes by Minnesota researchers William Iacono, Uma Vaidyanathan, Scott Vrieze and Stephen Malone. In a nutshell, the researchers ran seven different genetic studies to try to find the genetic basis of a total of seventeen neurobehavioural traits, also known as 'endophenotypes'. Endophenotypes are a hot topic in psychiatric neuroscience, although the concept is somewhat vague. The motivation behind interest in endophenotypes comes mainly from the failure of recent studies to pin down the genetic cause of most psychiatric syndromes: 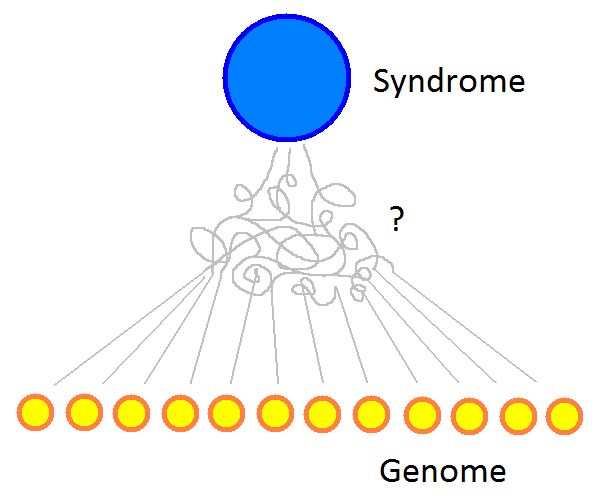 Essentially an endophenotype is some trait, which could be almost anything, which is supposed to be related to (or part of) a psychiatric disorder or symptom, but which is "closer to genetics" or "more biological" than the disorder itself. Rather than thousands of genes all mixed together to determine the risk of a psychiatric disorder, each endophenotype might be controlled by only a handful of genes - which would thus be easier to find. 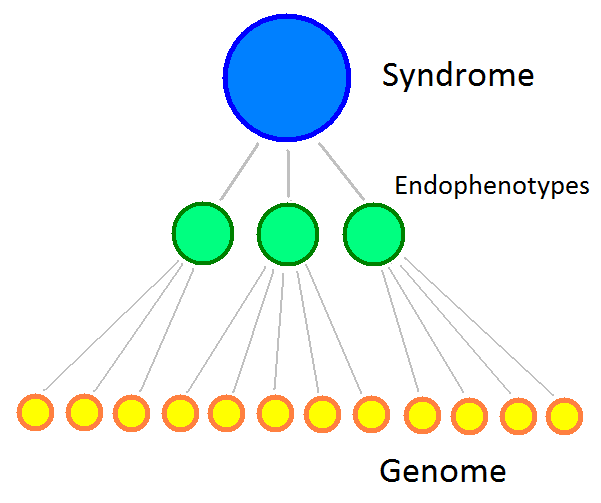 Endophenotypes therefore offer researchers a "bridge" between biology and psychiatry. That's the theory, anyway. But despite lots of talk, that theory has never really been tested - until now. To try to link endophenotypes to genes, the Minnesota team performed a genome-wide association study (GWAS) analyzing the DNA of 4,900 subjects who underwent neurobehavioural testing, including EEG. That's a moderate sample size by GWAS standards, but it's absolutely gargantuan in neuroscience and psychology terms. I can't think of another EEG study, genetic or otherwise, that had even 500 subjects, let alone nearly 5,000. This study is big. The results were equally striking - but mainly by their absence. This table summarizes all of the genetic findings for each of the seventeen 'endophenotypes'. Each column represents a different genetic 'search strategy'. The key thing to notice are the dashes, each one of which represents a null result. 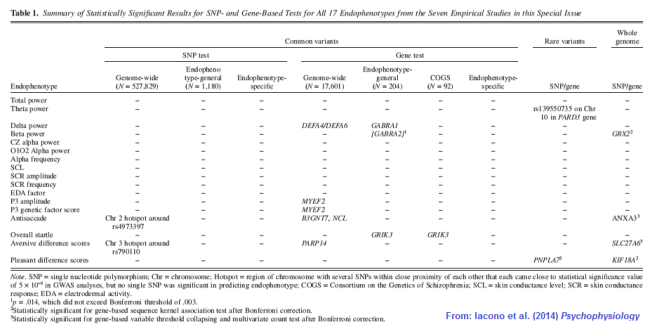 A dash means that no genetic variants were statistically significantly associated with the trait in question. Over 89% of the searches came up null in this way; for eight of the seventeen traits, the researchers found no associated genes using any strategy. For the other nine traits, there were a handful of 'hits', however many of these raise more questions than they answer, i.e. they occur in genes that are not known to be involved in brain function. There were absolutely no hits in the set of candidate genes chosen because previous research suggested that they ought to be involved. This doesn't mean that genetics has no influence on these traits, but it implies that the influence of any given genetic variant is tiny. Iacono et al. conclude by saying that

In my opinion, these results ought to prompt a fundamental rethink not just of endophenotypes but also of an idea that lurks in the background of an awful lot of neuroscience. This is the idea that some brain phenomena are more "basic" than others. One of the endophenotypes in the Minnesota study, for example, was brain alpha wave frequency as measured with EEG. Is alpha frequency "more basic" than, say, personality, or susceptibility to depression? To many people, it seems like it is. Alpha frequency is a measurable electrical phenomenon. It seems like "hard science" as opposed to personality which is "soft". But does that mean that it is simpler? After all, both alpha waves and personality are emergent properties of the whole human brain. Is it really a surprise, then, that alpha frequency turns out to be genetically complex? Or should we stop trying to divide the brain's functions into "physical" and "mental", "basic" and "complex" ones? Maybe, but that's idealistic thinking. In the real world, psychiatry has a lot of money, and a lot of hope, invested in the idea of endophenotypes. In Part II of this post, I'll look at what the Minnesota results mean for the future of psychiatric research.