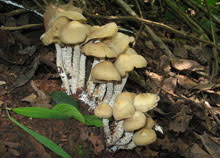 Medical research is getting a little groovier. In a new report, scientists declared that the active ingredient in hallucinogenic "magic mushrooms" had beneficial effects on test subjects who took the substance under a doctor's supervision. What's more, the effects lingered; 14 months after the experiment, more than half the subjects reported still feeling an

increase in well-being or life satisfaction, in terms of things like feeling more creative, self-confident, flexible and optimistic [AP].

The experiment was one of the few conducted in the four decades since the government cracked down on hallucinogens, banning most research and listing them as a dangerous drugs. Researchers say the study marks another shift in policy, which could yield research with dramatic insights.

"These drugs are no longer being confined to rats in test tubes," said David Nichols, a Purdue University pharmacologist who was not involved in the study. "What we're looking at is a largely unexplored technology for brain science -- it was discovered in the 1940s, set the psychiatry world ablaze in the 1950s, and was aborted by widespread recreational abuse, the reaction of the media and its confluence with the Vietnam war" [Wired News].

In the study, published in theJournal of Psychopharmacology [subscription required], researchers gave test subjects doses of psilocybin, the active ingredient in some wild mushrooms, and directed the volunteers to lie down, listen to classical music, and "look inward." When the trip was over,

many described life-changing mystical experiences of the sort typically reported by monks, saints and other devoutly religious. Even those who experienced fear or sadness rated the experience as spiritually important, and no one reported long-lasting negative effects [Baltimore Sun].

While some researchers hope to use psilocybin for scientific inquiry into the nature of human spirituality, others have more objective medical goals. Researchers say they'll conducting further studies to examine whether the mushrooms can help people with such wide-ranging ailments as obsessive-compulsive disorder, anxiety, and alcoholism, as well as people who are coping with a cancer diagnosis. For an in-depth look at how hallucinogens have snuck back into the lab, check out DISCOVER's recent story, "Could an Acid Trip Cure Your OCD?" Image: Wikimedia Commons

The drug is only given to people with no history of psychosis or serious mental disorders, and psychological support is provided during and after the experience [Los Angeles Times]. The psilocybin researchers also stressed that they're not encouraging people to take hallucinogens outside the controlled setting of a lab, and added that the powerful substances can provoke fear and panic.

was accompanied by another article [subscription required] which laid out the guideline for safe and ethical research on psilocybin: