A number of so-called scientific journals have accepted a Star Wars-themed spoof paper. The manuscript is an absurd mess of factual errors, plagiarism and movie quotes. I know because I wrote it.

Inspired by previous publishing “stings”, I wanted to test whether ‘predatory‘ journals would publish an obviously absurd paper. So I created a spoof manuscript about “midi-chlorians” – the fictional entities which live inside cells and give Jedi their powers in Star Wars. I filled it with other references to the galaxy far, far away, and submitted it to nine journals under the names of Dr Lucas McGeorge and Dr Annette Kin. 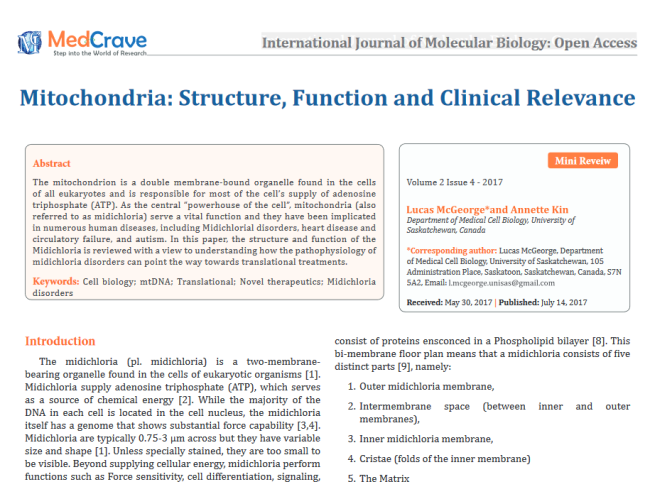 Four journals fell for the sting. The American Journal of Medical and Biological Research (SciEP) accepted the paper, but asked for a $360 fee, which I didn’t pay. Amazingly, three other journals not only accepted but actually published the spoof. Here’s the paper from the International Journal of Molecular Biology: Open Access(MedCrave), Austin Journal of Pharmacology and Therapeutics (Austin) and American Research Journal of Biosciences (ARJ) I hadn’t expected this, as all those journals charge publication fees, but I never paid them a penny.

Edit 28th July: All of the above journals have now deleted the paper, so I’ve made it available on Scribd.

So what did they publish? A travesty, which they should have rejected within about 5 minutes – or 2 minutes if the reviewer was familiar with Star Wars. Some highlights:

And so on. I even put the legendary Tragedy of Darth Plagueis the Wise monologue in the paper: 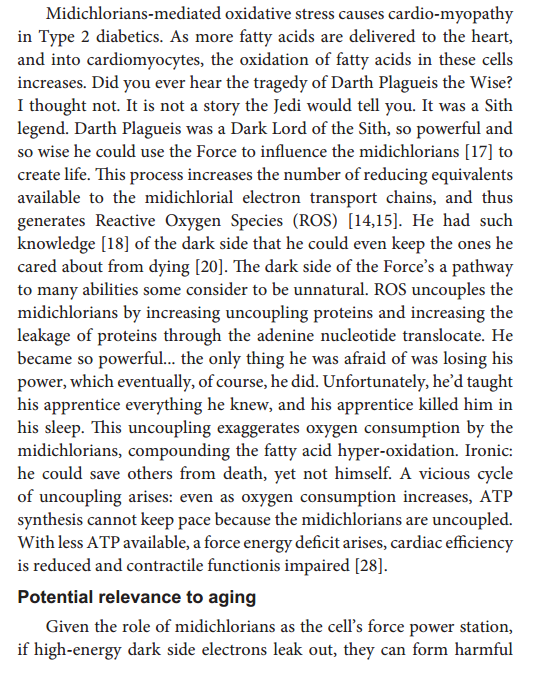 Tragedy of Darth Plagueis the Wise

Ironically, I’m not even a big Star Wars fan. I just like the memes.

To generate the main text of the paper, I copied the Wikipedia page on ‘mitochondrion’ (which, unlike midichlorians, exist) and then did a simple find/replace to turn mitochondr* into midichlor*. I then Rogeted the text, i.e. I reworded it (badly), because the main focus of the sting was on whether journals would publish a ridiculous paper, not whether they used a plagiarism detector (although Rogeting is still plagiarism in my book.)

For transparency, I admitted what I’d done in the paper itself. The Methods section features the line “The majority of the text of this paper was Rogeted [7]”. Reference 7 cited an article on Rogeting followed by “The majority of the text in the current paper was Rogeted from Wikipedia: https://en.wikipedia.org/wiki/Mitochondrion Apologies to the original authors of that page.”

Two journals requested me to revise and resubmit the manuscript. At JSM Biochemistry and Molecular Biology (JSciMedCentral) both of the two peer reviewers spotted and seemingly enjoyed the Star Wars spoof, with one commenting that “The authors have neglected to add the following references: Lucas et al., 1977, Palpatine et al., 1980, and Calrissian et al., 1983”. Despite this, the journal asked me to revise and resubmit.

At the Journal of Molecular Biology and Techniques (Elyns Group), the two peer reviewers didn’t seem to get the joke, but recommended some changes such as reverting “midichlorians” back to “mitochondria.”

Finally, I should note that as a bonus, “Dr Lucas McGeorge” was sent an unsolicited invitation to serve on the editorial board of this journal.

So does this sting prove that scientific publishing is hopelessly broken? No, not really. It’s just a reminder that at some “peer reviewed” journals, there really is no meaningful peer review at all. Which we already knew, not least from previous stings, but it bears repeating.

This matters because scientific publishers are companies selling a product, and the product is peer review. True, they also publish papers (electronically in the case of these journals), but if you just wanted to publish something electronically, you could do that yourself for free. Preprint archives, blogs, your own website – it’s easy to get something on the internet. Peer review is what supposedly justifies the price of publishing.

All of the nine publishers I stung are known to send spam to academics, urging them to submit papers to their journals. I’ve personally been spammed by almost all of them. All I did, as Lucas McGeorge, was test the quality of the products being advertised.