Political moderates and independents are not as smart on average

Long time readers know that it's trivially easy to extract information from the GSS that political moderates and independents are not as intelligent as partisans and ideologues. New readers are not always familiar. A comment:

First, a quick review of the data. I used two GSS variables, PARTYID and POLVIEWS, and limited the sample to non-Hispanic whites after the year 2000. I removed those of "Other party" as well. Finally, I crossed that against vocab score results, which correlates with intelligence with a value of 0.70. It is rather obvious that middle-of-the-roaders are not as bright: 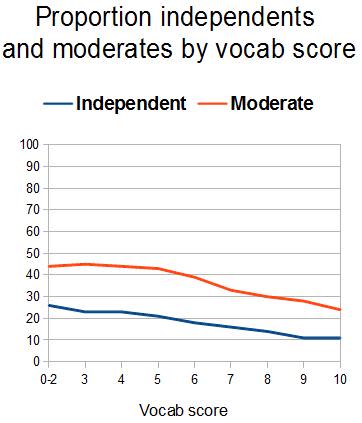 As you can see the proportion in the middle decreases as you go up in intelligence. Why? A straightforward explanation is that independents and moderates are "low information" political actors. And therefore they are likely to be less intelligent in the first place. But there is I think another dynamic going on: the smart know where to go to reinforce their biases. That is, they're far better at motivated reasoning, and become progressively more polarized and ideological. My point is that the reality is on many topics very few of us 'reason for ourselves.' Rather, we trust certain people who know better. On economics smart liberals trust Paul Krugman, and smart conservatives trust Greg Mankiw. Not only are these individuals gifted with a specialized knowledge of economics in relation to the typical smart person, but they're much smarter than average. That's one reason I'm usually not interested in talking politics in detail with people: why not just go to the source that they're garbling?