Pigeon Pathologists Know Cancer When They See It 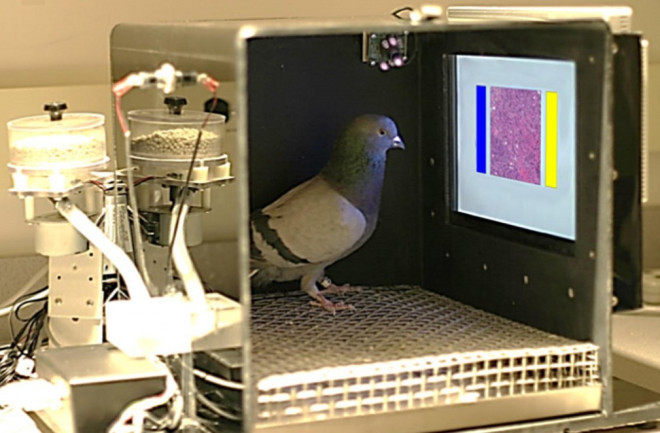 This is the conditioning box where pigeons learned their new skill. (Credit: Levenson et al.) Would you rather have a human or pigeons scrutinize medical images to detect the presence of cancer? At first blush, it seems like an absurd question. But if you went out on a limb and chose pigeons, their diagnoses, surprisingly, would rival a human’s in accuracy. In a thought-provoking study, researchers trained pigeons to look at anatomical images and distinguish between benign and malignant breast tissue. After about 14 days on the job, a pigeon flying solo could scope out cancerous tissue with 85 percent accuracy. In other words, in less than a month, pigeons picked up a skill that takes an inexperienced human observer considerable training to master. Let that sink in for a moment. Pigeon Pathologists To train pigeon pathologists, a team led by Richard Levenson from the University of California Davis Medical Center and Edward Wasserman from the University of Iowa placed pigeons in a conditioning chamber fitted with a touch-screen monitor. Eight pigeons were shown 144 images of benign or malignant tissue samples at three levels of magnification, at different orientations and at different brightness levels. The birds made a diagnosis by pecking on a blue or yellow rectangle on the screen, and they received a tasty treat for each tissue sample they correctly identified. At the outset, the pigeons were only 50 percent accurate, or simply chance. But after 14 days of training, their accuracy rose to 85 percent. When researchers placed the birds in groups to “vote” on the correct diagnosis — fittingly called “flock sourcing” — pigeons were 99 percent accurate. And just to ensure pigeons’ accuracy wasn’t due to memorization, researchers gave them a set of novel tissue-sample images, and the birds still performed just as well.

“We’re very excited about these discoveries,” says Wasserman. “We didn’t go into this expecting very much from the birds, but they did the tasks better than we thought they could.” Researchers published their findings Wednesday in the journal PLOS One.Why Do This? We’re certainly not going to replace trained human pathologists, who are still the gold standard, with flocks of pigeons at the doctor’s office. However, pigeon pathologists could help mathematicians and engineers who are working to improve medical imaging technology. For example, trained pigeons could be deployed to test how useful a particular image manipulation, or new imaging technique, really is. “There are some actual practical things that can be done, since pigeons are pretty faithful models of human vision and skills,” says Levenson. “Imaging technology is not static.” And as opposed to humans, pigeons could help test imaging tweaks in high volume both quickly and cheaply. “They are willing workers; they don’t need sick days. They are real workaholics,” says Wasserman. “They work for peanuts! Well, not really, because peanuts are too big.” But with advances in brain mapping and artificial intelligence, it’s not too far-fetched to envision a day when a computer evaluates medical images using an artificial neural network that apes the pigeon’s brain, Wasserman says. “We used biomimetics for a number of purposes, like shark-skin swimsuits, for example,” he said. “We have all kinds of other examples of devices and methodologies that are predicated on biological solutions.” Humbled Humans Still, there’s a larger, philosophical side of this pigeon story. Wasserman and Levenson say this experiment should, perhaps, humble us all a bit. The results of their study indicate that pigeons and humans both rely on similar neurological hardware to interpret the world. In other words, our underlying mechanisms of visual learning appear to be in parallel with a pigeon’s in many ways. We have utmost respect for dogs’ sophisticated sense of smell; we don’t seem to have trouble believing they can sniff out cancer, for example. But pigeons, the same birds often called “rats with wings,” also deserve higher praise for their skills. “We should be more appreciative of our fellow inhabitants on the planet. We don’t give them credit for the skills that they do possess,” says Levenson. “This is a tribute to the fact that we’re all in this together and we’re more similar than different in many ways.”