Is it your smile? Your laugh? Or your armpits? The frustrating science of finding pheromones.

A word of advice, should you ever find yourself in George Preti's lab:Don't inhale. From the doorway, his windowless lair at the MonellChemical Senses Center in Philadelphia looks harmless, with its wonkyassemblage of test tubes, beakers, reagents, rubber gloves, andlaminar-flow hoods. Then Preti guides you to a bench under one of thehoods. He unscrews a cap from a bottle of clear liquid and waves thevessel under your nose. When your reaction falls short of nausea, hetries another bottle, the fumes from which will ruin your appetite forhours. 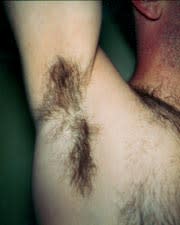 The human armpit is packed with two kinds of sweat glands. Eccrineglands help regulate temperature through fluid evaporation; the averagehuman body possesses up to 3 million of them. Apocrine glands numberapproximately 2,000; most are concentrated in the armpit and genitalregions. Men and women may communicate chemically through secretionsfrom the apocrine glands, which lie beneath hair follicles. Skinbacteria break down the secretions, creating a distinctive bouquet.

Preti grins and turns the bottle so that its label faces you.

Preti tells you the bottle contains a synthetic version of that sweetelixir brewed in nature just south of the shoulder and north of theribs. "Better living through chemistry!" he exclaims.Preti is hot on the scent of the human armpit because he believes that secretions from the so-called axillary region harbor pheromones,airborne chemical signals that influence mating, dominance, familyties, and maturation in other species of the animal kingdom. Scientistsalready know that in humans pheromones convey information aboutidentity, kinship, age, health, happiness, fertility, and arousal. Andstudies have shown that exposure to some human emanations can boostmood, tweak hormones, and inspire aggression or attraction in others.Nonetheless, scientists haven't figured out how human pheromones work.They can't even agree on a single chemical worthy of the title.

"We have no clue what the active ingredients are," Preti laments.

So he is determined to find them. An organic chemist who specializesin body odor, Preti is well versed on the glands in the humanarmpit—not to mention those in the mouth, breasts, crotch, andfeet—that secrete chemicals that vaporize readily. He catalogs dozensof volatile secretions and studies the skin-borne microbes that processthem before they're released to the air. And he looks for physiologicalbenchmarks that give hard proof of pheromonal effects in recipients."It's very arduous, time-consuming, and expensive," says his partner atMonell, neuroscientist Charles J. Wysocki. But in their latest work,the two have documented a specific effect of men's underarm chemistryon the hormones underlying women's menstrual cycles, and they say it'sonly a matter of time before they isolate the culpable constituents."It might be the whole bouquet," Wysocki notes.

Much of theevidence that people exchange and respond to airborne chemical messagesis inferential. Men who have no idea what they're smelling inexplicablyprefer the aroma of T-shirts worn by ovulating women to those worn bywomen in another part of their cycle. A woman will unknowingly ratemale body odor as more pleasant if the source of the odor shares fewerof her immune-system genes (which means he's less likely to be closekin). People exposed to cotton underarm pads worn by moviegoers cantell whether a viewer was scared or amused.

The effects of chemical messages among creatures other than humans arefar more dramatic. Coined in 1959 from the Greek words meaning "carrierof excitement," the term pheromone first referred to substancesproduced by insects to communicate with members of their own species.The first pheromone to be identified, called bombykol, is a substancemade by female silk moths that attracts males. Attracts isperhaps too coy a word; bombykol pretty much strips a male moth of freewill. Candidate pheromones have also been proposed for mice, elephants,pigs, hamsters, and deer. Compounds released in the urine or body odorof male mice, for example, can signal dominance and spark aggressionbetween males and prompt reproductively dormant females to startcycling. The scent of a strange male mouse will cause pregnant femalesto abort their fetuses. A substance called androstenone induces afemale pig to round her haunches and flex the muscles of her pelvicfloor in anticipation of mating. In nature, androstenone resides in thesaliva of male pigs; in commerce it resides in a product called BoarMate, which makes sows more receptive to artificial insemination.

No chemical elixir has been found to have effects analogous tobombykol or androstenone in humans. But researchers have known fordecades that human pheromonal effects extend beyond vibes andpreferences to basic physiology. One of the earliest hints came fromthe work of a young psychology student named Martha McClintock. In thelate 1960s, McClintock, still a student, showed that the menstrualcycles of her classmates at Wellesley College became synchronized amongwomen who spent a lot of time together: best friends, roommates, anddorm mates. In the 30 years since then, McClintock, now at theUniversity of Chicago, and many other investigators have shown thatexposure to female underarm secretions alone is sufficient to effectchanges in the timing and length of menstruation. Male axillarysecretions also can shift menstrual schedules. Somehow, an airbornemessage penetrates the endocrine system: from the breeze, to the brain,to the blood. 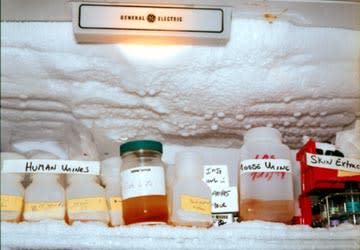 Vials in the freezer at the Monell Chemical Senses Center inPhiladelphia contain odoriferous substances that may be involved inchemosensory communication. The study of chemical ecology andcommunication is one of the center's six areas of research.

Preti hopes that he can map this route byidentifying specific physiological responses to pheromonal stimulation.Experiments with female goats, for example, suggest that the timing ofsexual receptivity can be modulated by pulses of luteinizing hormone,or LH, a compound that rhythmically surges in the bloodstream of womenas well as goats many times a day. The frequency of LH pulses increasesas women approach ovulation. In a study published earlier this year,Preti and Wysocki found that a single smear of male underarm extractsaround the noses of female subjects would shorten the interval to thenext LH pulse by an average of 20 percent. The extract odor wasdisguised with a fragrance, and subjects never guessed the nature ofthe test substance. According to Preti, "something in the applicationis influencing the timing mechanism in the hypothalamus," thereproductive command center in the brain.

The extract alsoseemed to put women at ease: Recipients reported feeling more relaxedand less tense than they did without the extracts, even though theprocedure required a hospital stay and repeated bloodlettings. Granted,it's no Boar Mate. But chemosensory experts say the role of pheromonesin human life is bound to be less than deterministic. For one thing,our sense of smell is embarrassingly inept compared with that of othermammals. And human beings probably aren't endowed with a functionalvomeronasal organ—an anatomic sensor of pheromone signals that is foundin many amphibians, reptiles, and mammals. The vomeronasal organ gotits reputation as a kind of sixth sense because in rodents, nervefibers from the organ's receptors bypass the cerebral cortex—the seatof consciousness—in favor of the amygdala and the limbic system, brainstructures that coordinate emotional and autonomic responses. If youdisable the gene for a single vomeronasal protein in mice, a male mouseloses his ability to distinguish other males from females and will tryto mate with both.

A functional vomeronasal organ is present innew-world monkeys but not in chimpanzees, gorillas, and orangutans, ourclosest relatives. And what about us? A research team at the Universityof Utah in Salt Lake City has championed the cause of the humanvomeronasal organ for more than a decade. Physiologist LouisMonti-Bloch, now at Pherin Pharmaceuticals in Mountain View,California, and his colleagues have documented the location of thevomeronasal organ's outlet in humans: a tiny pit just a couple ofcentimeters up the inner wall of the nostril. They've pioneeredequipment that confines puffs of airborne chemicals to that area, southof the smell sensors in the olfactory epithelium. They have testedodorless human-derived substances that reportedly cause electricaldischarges in the region of the vomeronasal organ pit and that changeblood pressure, heart rate, hormone levels, and mood.

Theirfindings haven't exactly been embraced. No one disputes the presence ofthe intra-nostril pit. But critics say there's no good evidence of anactive nerve pathway from the pit to the brain.

In any case,you may not need a vomeronasal organ to sniff out a pheromone. Pretiand Wysocki think the general sense of human olfaction may well havetaken over specialized chores relegated to the vomeronasal organ inother species. In addition to a freezer stocked with sweat, urine,spit, and worse, Preti keeps a long list of body-secretion compoundsthat could prove to govern effects on physiology or mood. He has a listof diseases that may someday be diagnosed by volatiles from the breathor the body. And with his boss, Monell director Gary Beauchamp, he isdeveloping the idea of the odor print: the notion, first proposed bythe late biologist Lewis Thomas more than 25 years ago, that body odorbears a signature of immune-system proteins as unique as a face or afingerprint. There's some evidence that people can recognize odorprints even when they aren't aware of smells. One recent study suggestsodor prints may even influence our choice of spouses. "It should beeverywhere on the body," says Preti. "But of course my favorite area isthe armpit."

Read "The Sniff of Legend" (Discover,April 1994) by Karen Wright, about pheromones and the search for thehuman equivalent of the vomeronasal organ.