A French study reveals which medications are most often associated with violence and aggression: Prescribed drugs and violence. 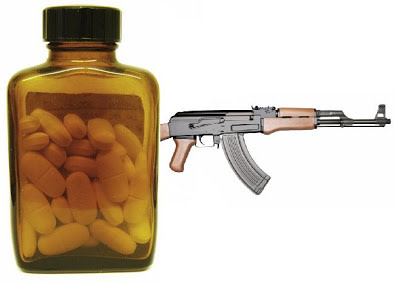 The authors trawled the French records of drug side effects from 1985 to 2008. By law, doctors in France must report any adverse event which is either serious, or unexpected, to the authorities.

They found a total of 540 reports mentioning "violence", but only 56 of these were clear-cut incidents of physical aggression towards others. Suicide and self-harm were not included, unless they also involved violence to other people.

There were 76 suspect drugs (because some reports included one or more). Here's the Hall of Shame:

Antipsychotics and anti-epileptics were also high on the list.

There were also reports involving and the antiviral drugs interferon (3), ribavarin(2), and efavirenz (3); the stop-smoking aid varenicline (4); anti-acne drug isotretinoin (4); and the banned weight-loss drug rimonabant (2). All of these can also cause depression, and I've blogged about some of them before for that reason.

Of the perpetrators, 86% were men. Nearly half had a prior psychiatric history, but that's not surprising because many of these drugs are prescribed to people with mental illness.

In terms of the number of reports of violence relative to the total number of adverse events for each drug, Parkinson's drugs were "worst". However, this doesn't mean much, because it might just mean that these drugs are generally mild in terms of side effects.

So it's an interesting dataset, but it's impossible to come to any firm conclusions as to how common these effects really are. Cases might go unreported if they're thought to be "normal" violence; and regular violence could also get wrongly blamed on a drug - criminals get sick too.

Finally, we ought to remember while these effects are inherently attention-grabbing (and Parkinson's drugs in particular have given rise to some tabloid-friendlystories), the overall rate was tiny - less than 3 cases per year, for all prescribed drugs, in a nation of over 60 million people.