People with Synesthesia’s Senses Are Entangled. Some See Letters as Colors

Not everyone's senses are separate. Those with the neurological condition can hear colors, feel sounds and even see time as different points in space. 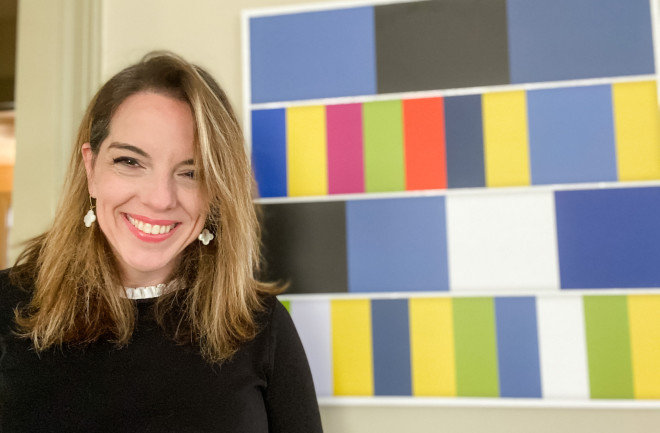 When Bernadette Sheridan hears your name, she doesn’t think about the spelling in a traditional sense. Her mind isn’t trying to figure out what letter goes after the other to form the name. Instead, she hears the name in swaths of color using her own “color alphabet.”

Sheridan, 49, is a synesthete. Or, in other words, someone with a neurological phenomenon known as synesthesia.

For as long as Sheridan can recall, letters and numbers weren’t just shapes and symbols. They were infused with color in her mind. A is red, B is blue, C is lime green and so on. For example, “Emily” — which happens to be Sheridan’s favorite name — is spelled with five bright, cheerful colors: yellow, navy blue, white, periwinkle and light yellow.

She even sees the days of the week and months in color. Sunday is dark blue, Monday is red-orange, Tuesday is gray-blue and Wednesday is yellow. January is light blue, February is light pink, March is yellow-green and April is raspberry.

Sheridan first learned about her unique sensory experience in 2002, while working as an art director for the New York Daily News. At the time, she was oblivious of the fact that other people didn’t experience words the same way she did. While working on headlines for the black-and-white pages of each issue, she would argue with her editor about words not being the right color.

“A word like killed is lighter and brighter,” Sheridan explains. “It has light letters, like I’s, L’s and E’s, but a word like murder is dark and foreboding. A word like slain has a red A right in the middle, like a knife. I would suggest words based on what I thought they looked like. Of course, [my editor] didn’t understand, and I didn’t understand that he didn’t understand.”

Then, one day, Sheridan’s editor gave her an article from the science section of the Wall Street Journal about synesthesia, a neurological condition in which one or more of the five senses, or other types of perception, crosses with another. It’s a type of sensory entanglement that can occur in a multitude of combinations, but there are at least 10 known forms of the condition. Some synesthetes can hear colors, feel sounds and see time as different points in space. People with the most common type, grapheme-color synesthesia, see letters as colors.

“I thought, ‘Oh my god, there’s a name for it!’” Sheridan recalls. “It’s like the day your world changes. … It gave me something to start looking at and learning about.”

Approximately 4 percent of the general population has some form of synesthesia. But because people often don’t realize they have the condition, scientists believe that the actual number may be even greater.

While the precise mechanism of synesthesia is still largely unknown, the prevailing hypothesis is that there is a genetic component that allows some people to have an increased cross-talk between neighboring areas of the brain that govern specific functions.

“It’s like two countries with porous borders that are talking,” says David Eagleman, a neuroscientist at Stanford University and leading researcher in synesthesia. “For example, the areas of the brain that are involved in letters and those that are involved in colors happen to sit close to each other, so it’s thought that — for whatever reason — there’s more of a relationship between them.”

In 2005, Eagleman launched the Synesthesia Battery, an online test to help people assess whether or not they have synesthesia and what form. The site eventually became the gold standard for assessing synesthesia and collected data from more than 40,000 rigorously-verified synesthetes.

Eagleman is working in collaboration with colleagues in Europe to conduct a large genetic study of synesthetes. They discovered a hotspot on a particular region of chromosome 16, one of the 23 pairs of chromosomes in humans, but have not yet identified the significance behind it. Eagleman says he suspects it will be a subtle variation that nonetheless has drastic consequences.

“It’ll be something that changes things by 1 percent — some little change in the confirmation of a neuroreceptor and your consciousness is different,” he says. “Our consciousness is very fragile, and all you need to do is change the network a little bit and you get a different experience. I think that’s what synesthesia is: You just change things by a little, tiny genetic tweak and, suddenly, letters have color to them.”

While true synesthetes naturally have this unique trait, scientists believe there is some degree of conditioning by external stimuli. As kids with synesthesia are learning to memorize sequences — such as the alphabet, numbers, weekdays and months — they associate them with colors that they’re exposed to as a built-in mnemonic device.

“If you have the genetics for it and you’re trying to learn these arbitrary sequences, your brain reaches out and says, ‘This doesn’t make sense,’” Eagleman explains. “It hooks things with a different property, like color, so it becomes easier to remember.”

Grapheme-color synesthetes, like Sheridan, all have their own unique color alphabet, but some commonalities exist. According to a 2015 study published in PLOS One, Eagleman and his team examined 6,588 English-speaking grapheme-color synesthetes from their database to see whether or not synesthesia was influenced by Fisher-Price’s brightly colored letter magnets. The sets, which were produced from 1971 to 1990, included red A’s, orange B’s, yellow C’s and lime green D’s.

A pattern emerged in their findings. The study found 6 percent of the total participants had color-letter associations that matched the toy set. Among that population, 15 percent of those born during the apex of the toy’s popularity, from 1975 to 1980, reported colors congruent with the toy. In contrast, no one born five or more years before the toy was manufactured matched the Fisher-Price colors. The researchers discovered that grapheme-color synesthetes who were exposed to the alphabet set during childhood were more likely to see similar colors as the toys.

“What that taught us is that you can imprint on particular things,” Eagleman says. “The reason most synesthetes probably seem to have a random alphabet is because what you imprint on is pretty random — whatever quilt you happen to have in your kindergarten classroom or whatever crayon you happen to pick up before you practice the letter C a million times.”

To better understand the neural pathways of synesthesia, researchers are using advanced neuroimaging to study the phenomenon. Using MRIs to examine the structural connectivity in synesthetes, some studies have reported increased volume of gray matter in certain regions of the brain linked to color processing. But these researchers have also encountered a chicken-or-the-egg conundrum: Were synesthetes born with extra gray matter, or did they develop it after because they used that part of the brain more than non-synesthetes?

Other studies used functional neuroimaging, such as single-photon emission computed tomography (SPECT) and fMRI scans, to trace neural activity to certain functions. The main area of interest is the hV4 region of the visual cortex, which has been shown to be more active in grapheme-color synesthetes. However, these findings are inconclusive.

“As we get better imaging of the brain, which is happening in real time, I think we're going to be able to start to draw out the pathways,” says Randall Wright, a neurologist at Houston Methodist Hospital. “We can speculate when pathways are involved based upon what the person is doing.”

The paucity of conclusive data is in large part due to the fact that the human brain is still one of science’s greatest mysteries. With 86 billion neurons and 100 trillion synapses, we’ve only grasped the tip of the iceberg in understanding the intricacies of the brain.

“There are so many things at different levels that we don't know about the human brain,” Wright says. “Studying synesthetes more can give us more insights into how the brain really works.”

‘What Color is Your Name?’

In January 2020, Sheridan launched an online synesthesia project called “What color is your name?” that visualizes people’s names as color blocks based on how she sees them. She created it as a way to share her sensory experience with the public.

“I want people who don’t have synesthesia to come to it and have fun with it — to be able to say, ‘Oh, this is a new way for me to understand how other people experience an overlapping of senses,’” Sheridan explains.

Her website has helped raise awareness of grapheme-color synesthesia, and she hopes that more people will discover their own color alphabet.

“It’s just something that you know about yourself, but nobody ever asks you,” she says. “For a lot of people who don’t know they have synesthesia, that’s the way to figure it out. Ask your friends a leading question. You could say to them, ‘What color is B?’ If they say it’s blue, they have synesthesia.”

More From Discover
Mind
Why Do We Hold On To Clutter?
Health
10 Science-Backed Ways to Boost Your Brain
Health
Extreme Fatigue: 4 of the Longest-Lasting Sporting Events
Mind
Weed Might Not Make You Creative After All
Mind
How Does Alzheimer's Disease Lead to Death?
Technology
What Is a Social Media Cleanse?
Recommendations From Our Store
My Science ShopDiscover STEM Kits
My Science ShopDiscover 2022 Calendar
My Science ShopStrange Science
My Science ShopElements Flashcards
Shop Now
Stay Curious
Join
Our List