How a common word is reshaping the English language, along with our notions of gender and equality. 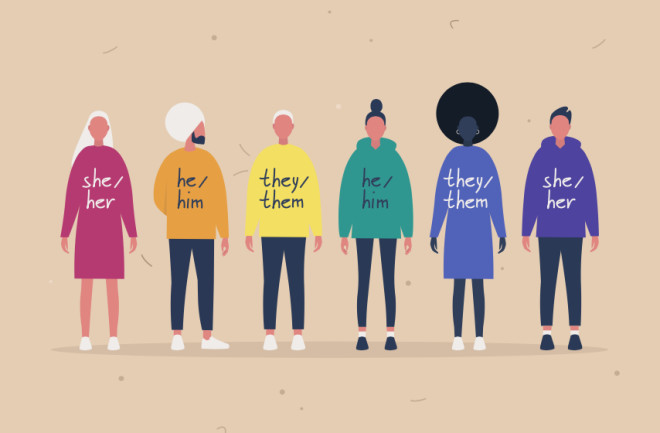 Battles of grammar, for the most part, play out in English classrooms and in the pages of style guides. Rarely do arguments over split infinitives and Oxford commas venture beyond the walls of academia. But one linguistic phenomenon lands in the limelight every so often, and it’s a word you know well: the pronoun “they” — along with its derivatives “them” and “their.”

It lies at the heart of a struggle over both grammar and human identity, specifically when it's applied to an individual rather than a group. For example: Alex was so hungry they cleaned their plate in a minute flat. In its singular form, this nondescript pronoun can refer to a person without specifying their (case in point) gender. As such, it wields great power in both the feminist and non-binary movements. What’s more, research suggests it’s a prime example of language in flux, marked by an observable shift in the grammatical paradigm as people adjust their understanding of the pronoun’s versatility. In 2015, the American Dialect Society even named it word of the year.

Many critics remain uneasy with singular “they,” and plenty of prescriptivists — those who uphold traditional and formalized language rules, rather than how people actually use language currently — condemn it as ungrammatical or ambiguous. But that hasn’t stopped its ascent.

At this point, it’s probably an exaggeration to call the dispute a battle. Dennis Baron, a linguist at the University of Illinois, likes to tell the old guard of proper English that, “If you complain about a particular issue, it’s usually … too late to do anything about it.” He also likes to point out that critics themselves, when they aren’t paying attention, regularly use singular “they.”

The word has a long, complex history, and today it exists in several nuanced forms. Evan Bradley, a linguist at Penn State Brandywine, says that “not all singular ‘theys’ are the same.” And they enjoy varying levels of acceptance. Some are so common that most people find them unremarkable. Imagine that a random driver swerves in front of you while cruising down the road. You might respond, “They cut me off!” in reference to the singular driver. Or, perhaps you find a billfold with no identification inside? It’s natural to say, “Somebody lost their wallet.”

The oldest kind of singular “they” appeared in writing around 1370, and certainly showed up earlier than that in speech. Shakespeare used it frequently around the turn of the 17th century (“And every one to rest themselves betake”), and Jane Austen in the 19th (“No one can ever be in love more than once in their life”). In these examples, the antecedent — the noun to which the pronoun refers — is generic, meaning it doesn’t indicate a specific person, or gender for that matter.

Despite these precedents, grammarians steered the generic antecedent in a different (and more masculine) direction. In the mid-1500s, William Lily declared in his Latin textbook that “the masculine gender is more worthy than the feminine, and the feminine more worthy than the neuter.” (He was speaking in the context of grammatical gender, rather than biological sex or socially-constructed gender roles in humans. And notably, English as a language is mostly without grammatical gender). Lily’s book stood as the foremost Latin grammar guide for centuries, and his gender rule, transferred to English, lived on in the axiom that “the masculine embraces the feminine.”

That thinking gave rise to the generic “he,” a longstanding linguistic scourge upon feminism. These days, most writers who can’t stand singular “they” at least sprinkle their writing with generic “she” as well as “he.” But for a long time, the masculine version was ubiquitous, pervading all writing up to and including the Constitution of the United States of America. Article II, Section 1, in laying out the president’s powers, states that “He shall hold his office during the term of four years.”

Eventually legislators in Britain enshrined generic “he” in law with the Interpretation Act of 1850, declaring that “words importing the masculine gender include females.” The U.S. passed a similar law in 1871. “‘He’ was deployed to include women when it was convenient,” Baron says, “and to exclude them when men decided, ‘No women in the clubhouse.’ ”

Second-wave feminists finally hurled generic “he” into the lexical dustbin a century later, but the problem remained that English does not have a built-in, third-person pronoun that is both singular and gender-neutral. Starting in the late 18th century, people began coining neologisms to fill the gap.

Some, like “hesh” and “hiser,” both from the 1800s, were combinations of the existing pronouns. Then there was “thon,” a contraction of “that one” that may have come closest to general recognition. Today there’s a new array of gender-neutral pronouns, including ze and ey. In the end, though, none have entered the mainstream (with the exception of “hen,” a made-up Swedish pronoun that now offers an increasingly popular alternative to the gendered “hon” and “han”).

Baron, who catalogued more than 100 of these inventions in a 1981 paper, says that “nobody really latched on to any one." But, he adds, “they said, ‘Yeah, there’s a need here.’ ” The solution, in his opinion, is already on the tip of our collective tongue. Singular “they,” as a word we use every day, may be the most viable option. Bradley agrees, saying that in language, “we tend to recycle things rather than create new things.”

In its more familiar variations, “they” is already a widespread feature of colloquial conversation and writing. And even in its least traditional form — to refer to a specific, nonbinary person — research shows that people, and especially the younger generations, are growing accustomed to singular “they.”

Kirby Conrod, a linguistics professor at the University of Washington whose own personal pronouns are they/them, polls students each semester to assess their feelings about this specific usage of the word. Most have no objection; some, especially those who grew up using singular “they” with nonbinary friends, are simply confused — why would the professor ask about such a mundane word? “It’s really already hit the threshold of this critical mass,” Conrod says. “It’s part of the language enough that I don’t think you could squash it if you tried.”

So why the resistance to singular “they,” especially with specific antecedents? According to Bradley’s research, people with traditional ideas about gender and sex — namely, that they are one and the same — are more likely to reject it, often saying it rings ungrammatical. But not everyone shares that complaint, suggesting this grammar isn’t hardwired. Those with nonbinary friends, family, coworkers and acquaintances tend to be more open to it.

Essentially, exposure and motivation to change your speech are the greatest predictors of acceptance for specific singular “they,” Bradley says: “Not everyone’s walking around with the same grammar in their head, and we can correlate that a bit with people’s attitudes.”

Some believe opposition to singular “they” has always, or at least often, been ideological. Genuine grammatical qualms may play a role, but Baron cautions that “linguistic analysis is not free from prejudice.”

One way or another, this plain pronoun has become a politically fraught word. Republican lawmakers defunded the University of Tennessee diversity office in 2016 after it encouraged the use of singular “they,” and the following year a transgender fifth-grade teacher in Florida was reassigned for asking students to refer to them as “they.”

These are isolated cases, though. Overall, the rise of singular “they” seems irreversible, as is often the case with linguistic transformations. And it’s not the first time a plural pronoun has morphed into a singular; in the 17th century the second-person “you” — until then used exclusively as a plural — gradually sidelined the now-antiquated, singular “thou.” No one today laments the loss.

It’s impossible to know how singular “they” will evolve throughout our lifetimes and beyond. Maybe it will spawn distinguishing variations to deal with ambiguity, in the way that “y’all,” “y’inz” and “you guys” have for the second-person. But throughout the transition, Conrod says, linguists are tracking minute changes “almost as a fossil record. What that tells us is that the grammar of English is shifting slightly.”

The shift is leaving an even more obvious paper trail. Following the American Dialect Society, Merriam-Webster also named singular “they” word of the year in 2019. Many of the institutions that guard and guide the written word, including the Associated Press, the Washington Post and the Oxford English Dictionary, have embraced it as well. People have recently started identifying their personal pronouns — he/him, she/her or they/them — on name tags at social events or personal bios on Twitter and other social media.

For like-minded speakers and writers, more specific questions still linger on how to use singular “they.” Some argue we ought to default to it when speaking about anyone whose gender we don’t know, regardless of their appearance. Conrod’s advice? “Really, really pay attention to what you’re doing and why you’re doing it,” they say. “Have an inner dialogue going. Notice when you use a pronoun, see what factors are influencing your decision. If the factors are your interpretation of somebody’s body or clothes, that is not amazing.”