Parents don't matter that much

Update: Stephen Dubner emailed me, and pointed me to this much longer segment which has a lot of Bryan Caplan. So it seems like the omission that I perceived was more of an issue with the production and editing process and constraints of the Marketplace segment than anything else. End Update I play a lot of podcasts during the day as I go about my business on my iPod shuffle. One of them is Marketplace, which has a regular Freakonomics Radio segment, where Stephen Dubner "freaks" you out with incredible facts and analysis, often with a helping hand from Steven Levitt. With all due respect to Dubner and Levitt, this still has very pre-Lehman feel. Economics has "solved" the workings of the explicit market, so why not move on to other areas which are ripe for conquest by the "logic of life?" In any case this week's episode kind of ticked me off just a little. It started off with the observation that college educated women apparently put 22 hours weekly into childcare today, vs. 13 hours in the 1980s. I guess fewer latchkey kids and more "helicopter parents?" Dubner basically indicates that the reasoning behind this is many parents are in a "red queen" arms race to polish the c.v.'s of their children for selective universities. This makes qualitative sense, but can we explain an increase of 9 hours on average for the ~25% of women who are college educated on striving to make sure that their kids have Wesleyan as the safety school? Let's put our quantitative "thinking-caps" on "freakonomics" style. ~25% of adults have university degrees. ~80% of these have public university degrees, which are usually not too selective. Some of the ~20% are from not particularly elite religious colleges. So the subset of Americans who graduated from elite universities is actually not too large a number. You can include these as natural aspirants for the best spots for their children. And a proportion of the large remainder, I'd estimate ~90%, who didn't go to a university which required a great deal of stress and c.v. polishing would certainly strive and hope for better for their kids. But can this explain a 9 hour average rise among tens of millions of women? Doesn't seem to pass the smell test for me. I suspect there's a more general norm of shifting toward "high investment parenting" among the college educated cohorts. A second aspect of the Dubner piece for Marketplaceis that it totally doesn't clue the listener in to the reality that there's a huge behavior genetic literature which predates the interest of economics in the outcomes of parenting. ~10 years ago Judith Rich Harris came out with The Nurture Assumption, which reported the conventional finding that shared family environment only explains a small proportion of the variation in many behavioral outcomes within the population. The remainder is split between genes and "other environment" (which is a catchall category). More recently Bryan Caplan's Selfish Reasons to Have More Kids is steeped in Harris' work. It's gotten a lot of media exposure, so I was surprised that Dubner didn't mention Caplan. Instead he focused on Bruce Sacerdote at Dartmouth, who has done some research on outcomes for adoptive and biological children. His research in this area seems about right, judging from what I know about findings in behavior genetics. In other words, he's not a trail-blazer as much as a trail-tender. You can find a representative paper online, What happens when we randomly assign children to families?:

I use a new data set of Korean-American adoptees who, as infants, were randomly assigned to families in the U.S. I examine the treatment effects from being assigned to a high income family, a high education family or a family with four or more children. I calculate the transmission of income, education and health characteristics from adoptive parents to adoptees. I then compare these coefficients of transmission to the analogous coefficients for biological children in the same families, and to children raised by their biological parents in other data sets. Having a college educated mother increases an adoptee's probability of graduating from college by 7 percentage points, but raises a biological child's probability of graduating from college by 26 percentage points. In contrast, transmission of drinking and smoking behavior from parents to children is as strong for adoptees as for non-adoptees. For height, obesity, and income, transmission coefficients are significantly higher for non-adoptees than for adoptees. In this sample, sibling gender composition does not appear to affect adoptee outcomes nor does the mix of adoptee siblings versus biological siblings.

If you are an adopted kid there are some traits where parents matter a lot. For example, what religion you follow. There are some traits where parents don't matter much at all. For example, how tall you're going to turn out to be. And there are all the traits in between, like whether you're going to finish college or are a regular church attender. Like most economics papers there's a lot of fancy regressions. But a few figures and tables will give you the right idea. 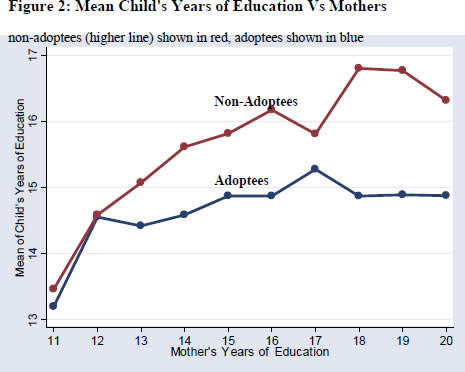 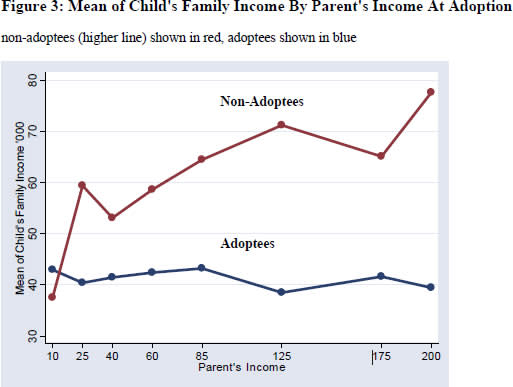 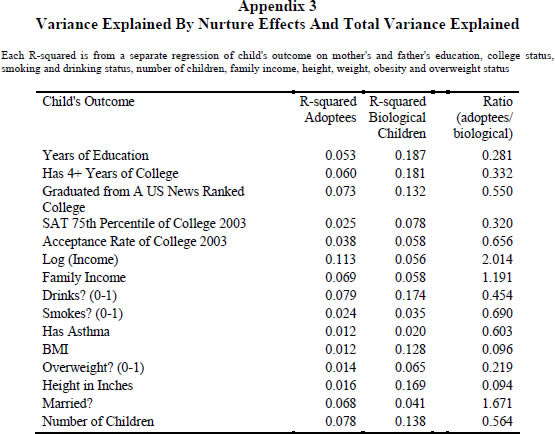 I agree with Dubner, Levitt, Sacerdote, Harris, and Caplan, that our society has convinced many parents that there are huge marginal returns in investment in quantity of time as opposed to quality. Falsely.

By "our society," I don't mean specific people. Rather, I think the Zeitgeist changes from generation to generation, and some prominent people reflect that Zeitgeist. There was a time where nature was all dominant, and then the pendulum swung back to nurture during the era of the "frigid mother." In the 1960s and 1970s despite the ascendant anti-hereditarian paradigm in the social sciences the rapid emergence of the "working mom" through female labor force participation resulted in less supervision in kids in households where both parents were working. But after this cultural "shock" perhaps we've adapted to the idea of women at work to the point where latchkey kids are no longer a culturally acceptable option? Or at least if you do have latchkey kids you're negligent. Much of the reaction to the free-range kids movement seems to verge on moral panic, indicating to me that helicopter-parenting has less to do with individual rational action and more to do with group norm adherence. "It's just what's done!" In hindsight I would have to admit that I was a de facto latchkey kid, and I had a stay at home mom! I Just mapped the route to and from the public library I regularly walked over the summers starting at the age of 8, alone, and it comes it at 0.8 miles. My dad was always at work, and my mom had less interest in books than I did. I do recall some young librarians asking if I was "OK" as I was carting stools back and forth because I was way too short to reach the top shelves in the adult stacks, as if I was lost, but after a while they got use to my presence and didn't bug me (though I do recall one security guard who always seemed to be think I was up to no good as I lugged the huge oversized biogeography books around). If this post piqued your interest, don't stop. To understand what this all means you need to think and read about this more. - Gene-environment correlation - Gene-environment interaction - Heritability - Norm of reaction For example, if you are thinking, "OK, so Razib just explained that getting a college education is mostly genetic," you don't get what I am trying to say here.