Non-Visual Processing in the Visual Cortex

Are there areas of the cerebral cortex purely devoted to vision? Or can the "visual" cortex, under some conditions, respond to sounds? Two papers published recently address this question. First off, Micah Murray and colleagues of Switzerland discuss The multisensory function of primary visual cortex in humans in a review paper published in Neuropsychologia. They criticize the conventional view that the primary visual cortex (in the occipital lobe) is little more than a reception point for signals coming from the eyes, via the optic nerve and thalamus. Instead, Murray et al. say, these parts of the brain also receive input from other sensory modalities - e.g. from the auditory cortex:

While Murray et al. focus on studies of healthy adult brains, another team of researchers recently showed non-visual processing in the visual cortex of congenitally blind individuals. Marina Bedny and colleagues of MIT published their results in the Journal of Neuroscience: "Visual" Cortex Responds to Spoken Language in Blind Children. Using fMRI, Bedny et al. show that sounds, especially spoken language, elicit activation in (what would normally be) the visual cortex of children born blind. This was not true of sighted children, even if they were wearing blindfolds. This suggests that the brains of the blind children had adapted, through some kind of neuroplasticity, to re-purpose the "visual" cortex to process sounds. 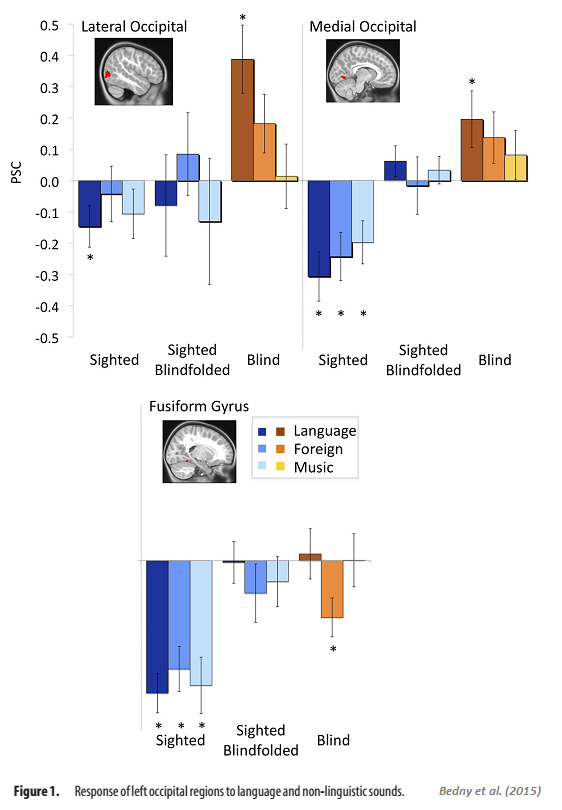 This result is striking, but it makes sense if we follow Murray et al. in believing that the "visual" cortex is inherently multisensory. If the normal brain contains auditory inputs to the visual cortex, maybe what happens in blind people is a strengthening of those existing connections? Then again, it's one thing to show that auditory signals can be transmitted into the visual cortex. But what is the visual cortex doing with this information - if anything? I wonder what would happen if someone were to suffer a brain lesion that disconnected their visual cortex from non-visual inputs. Would they show any noticeable symptoms? In blind people, there is evidence that the occipital cortex plays a functional role in Braille reading, a tactile (touch) modality. But common sense would suggest that these areas are functionally vision-specific in sighted people. Except for those of us with synesthesia, it seems like there's a qualitative difference between hearing and seeing. Maybe this intuition will turn out to be wrong.