Take a good look at this, fellas:

It might not look like much, but this is science's very first glimpse of something rather close to the hearts of most men.

These images show nerve activation in the spinal cord during sexual arousal. Using functional magnetic resonance imaging (fMRI), best known as a way of recording brain activity, applied to the spine, Canadian researchers Kozyrev et al were able to record the changes associated with, well, stimulation. Here's the paper: Neural correlates of sexual arousal in the spinal cords of able-bodied men. The methods sound like a real riot. Ten guys were scanned while being exposed to two different kinds of stimulation. First, 'audiovisual'

Films, depicting heterosexual couples engaged in sex play, vaginal sexual intercourse, and oral sex, were presented in two 5-min blocks, separated by a baseline condition (blank screen) for 3 min... The selected films were chosen by the investigators and were all very highly rated (on a scale of 1 to 10) by independent viewers. Only films that received a minimum score of 8 out of 10 were shown to participants.

All participants manually performed stimulation of the penis. Participants received written instructions superimposed onto a rear-projection screen, indicating whether to rest or to perform penile self-stimulation... there were two equal blocks of 1.5 min of stimulation that were separated by a 1.5-min block of rest... a shorter duration was selected for this part of the study in order to avoid overstimulation of the penis and/or ejaculation.

Good thinking. That could have been messy.

The results of the study largely confirmed previous work, but it's an important step forward because until now, no-one had measured arousal-related spinal activation directly in healthy humans; the evidence came from recordings in animals and spinal injury patients. Clearly there's more work to be done here. The images are rather crude. That grey oval is meant to look like this: 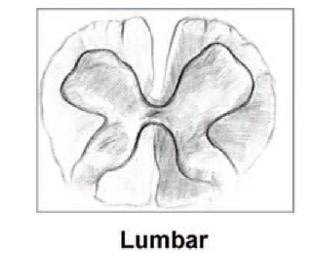 Still, it's early days. Spinal cord fMRI is not a new technique, having first been performed in 1999, but it's not received nearly as much research interest as the brain variety.